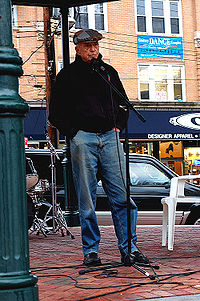 Berrigan was born in Virginia, Minnesota, on May 9, 1921. His mother, Frieda (née Fromhart), was of German descent.[1] and his father, Thomas Berrigan, was a second-generation Irish Catholic and active union member. Berrigan remained devoted to the Church throughout his youth, even after his father left. Although a lifelong devotee of Notre Dame, he joined the Jesuits directly out of high school in 1939 and was ordained to the priesthood in 1952. In 1954, he was assigned to teach theology at the Jesuit Brooklyn Preparatory School. In 1957 he was appointed professor of New Testament studies at Le Moyne College in Syracuse, New York. That same year, he won the Lamont Prize for his book of poems, Time Without Number. Berrigan developed a reputation as a religious radical, working actively against poverty, and on changing the relationship between priests and laypersons. While at Le Moyne, he founded its International House.[citation needed]

From 1966 to 1970, he was the assistant director of the Cornell University United Religious Work (CURW), the umbrella organization for all religious groups on campus, including the Cornell Newman Club, later the Cornell Catholic Community, eventually becoming the group's pastor.[2] He now resides in New York City and teaches at Fordham University in addition to serving as its poet-in-residence.[3]

Berrigan appears briefly in the 1986 Warner Bros. film, The Mission, playing a Jesuit priest, and also served as a consultant on the film.[4]

Protests against the Vietnam War

Berrigan, his brother Josephite priest Philip Berrigan, and Trappist monk Thomas Merton founded an interfaith coalition against the Vietnam War, and wrote letters to major newspapers arguing for an end to the war. In 1967, Daniel and Phillip were arrested for pouring blood on draft records as part of the Baltimore Four. Phillip was sentenced to six years in prison for defacing government property. This, and his belief that his support of POWs during the war was not acknowledged and appreciated, further radicalized Berrigan against the United States government.

Berrigan traveled to Hanoi with Howard Zinn during the Tet Offensive in January 1968 to "receive" three American airmen, the first American POWs released by the North Vietnamese since the US bombing of that nation had begun.[5]

In 1968, he signed the "Writers and Editors War Tax Protest" pledge, vowing to refuse to make tax payments in protest of the Vietnam War.[6] In the same year, he was interviewed in the anti-Vietnam War documentary film In the Year of the Pig, and later that year became involved in radical non-violent protest. He manufactured homemade napalm and, with eight other Catholic protesters, used it to destroy 378 draft files in the parking lot of the Catonsville, Maryland, draft board on May 17, 1968.[2][7] This group came to be known as the Catonsville Nine. Berrigan was arrested and sentenced to three years in prison,[8] but went into hiding with the help of fellow radicals prior to imprisonment. While on the run, Berrigan was interviewed for Lee Lockwood's documentary The Holy Outlaw. The FBI apprehended him at the home of William Stringfellow and sent him to prison. He was released in 1972.[9]

On September 9, 1980, Berrigan, his brother Philip, and six others (the "Plowshares Eight") began the Plowshares Movement. They trespassed onto the General Electric nuclear missile facility in King of Prussia, Pennsylvania, where they damaged nuclear warhead nose cones and poured blood onto documents and files. They were arrested and charged with over ten different felony and misdemeanor counts.[10] On April 10, 1990, after ten years of appeals, Berrigan's group was re-sentenced and paroled for up to 23 and 1/2 months in consideration of time already served in prison. Their legal battle was re-created in Emile de Antonio's 1982 film In The King of Prussia, which starred Martin Sheen and featured appearances by the Plowshares Eight as themselves.

Berrigan is still involved with the Plowshares Movement. 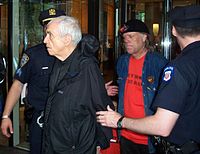 Daniel Berrigan is arrested for civil disobedience outside the U.S. Mission to the U.N. in 2006

Berrigan maintained his opposition to American intervention in Central America, through the Gulf War in 1991, the Kosovo War, the U.S. invasion of Afghanistan, and the 2003 invasion of Iraq. He is also an anti-abortion activist[11] and opponent of capital punishment, a contributing editor of Sojourners Magazine, and a supporter of the Occupy movement.[12]

Berrigan later wrote the play The Trial of the Catonsville Nine, which ran on Broadway for 29 performances in 1971 and was made into a movie in 1972.