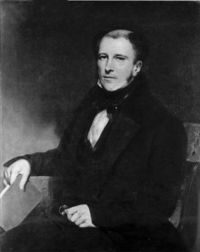 Sandford was born in Edinburgh, the second son of the Right Reverend Daniel Sandford, Bishop of Edinburgh. After receiving the rudiments of his education under the superintendence of his father, who died in January 1830, he was sent to the Edinburgh High School, and afterwards to Edinburgh University, where he distinguished himself by his progress in classical learning. In 1813 he was placed under the care and tuition of his godfather, Mr. Keyte, at Runcorn, Cheshire, and remained there for two or three years, pursuing his studies with enthusiasm and success.[1]

In 1817 Sandford was entered as a commoner of Christ Church, Oxford. At the public examination in Easter term, 1820, he was placed in the first class, in Literae Humaniores, and October 20, the same year, he took his degree of B.A. In 1821 he gained the Chancellor’s prize for an English essay on "The Study of Modern History" and May 25, 1825, he proceeded to the degree of M.A., as a grand compounder.[1]

The Greek chair in the University of Glasgow having become vacant, by the death of Professor James Young, Mr. Sandford, although an Episcopalian, was, on the recommendation of men of all parties, elected his successor in September 1821, at the early age of 23. In the beginning of the session of that year he entered on the duties, and by his unrivalled skill as a teacher, and the enthusiasm of his classic genius, he soon awakened a love for the study of Greek literature, not only in the University of Glasgow, but throughout Scotland.[1]

During the Catholic emancipation struggle in 1829, Professor Sandford hastened to Oxford, and gave his vote, as a member of that university, for Sir Robert Peel. In 1830, the honour of knighthood was conferred on him by King William IV, in consideration of his literary eminence.[1]

Ambitious of political distinction, on the first election under the Reform Act 1832 of members for Glasgow, in 1832, Sandford was one of six candidates for the representation of that city, on which occasion he was defeated, his name being third on the poll. In 1834 he was elected member for Paisley, and in June that year he took the degree of doctor of civil law. After sitting one session in parliament, ill health induced him to resign his seat, and in the beginning of the following winter he resumed his academic duties.[1]

He died of typhus fever, at Glasgow, 4 February 1838, in his 40th year, and was buried at Rothesay. He married, in 1824, a Miss Charnock, by whom he left a numerous family. His eldest son, who for several years held a high appointment in the educational department of the Privy Council, was, in 1862, appointed by the Commissioners, first secretary, and then general manager of the great International Exhibition at London that year.[1]

Sandford published several elementary works for the use of his class, such as:[3]

Sandford also contributed various articles to the Edinburgh Review and Blackwood's Magazine. In the latter periodical appeared some of his occasional translations of Greek poetry, as well as several eloquent and interesting papers from his pen, entitled ‘Alcibiades.’[3]

Sandford's most notable production, was an "Essay on the Rise and Progress of Literature", Glasgow, 1847, 8vo., originally written for The Popular Encyclopedia; or, Conversations Lexicon.