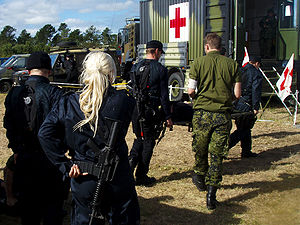 The Danish Defence (Danish: Forsvaret) is the unified armed forces of the Kingdom of Denmark, charged with the defence of Denmark and its overseas territories, Greenland and the Faroe Islands.

Denmark also has a concept of "total defence" (Danish: Totalforsvar).[8]

Its primary purpose is to prevent conflicts and war, preserve the sovereignty of Denmark, secure the continuing existence and integrity of the independent Kingdom of Denmark and further a peaceful development in the world with respect to human rights.

Its primary tasks are: NATO participation in accordance with the strategy of the alliance, detect and repel any sovereignty violation of Danish territory (including Greenland and the Faroe Islands), defence cooperation with non-NATO members, especially Central and East European countries, international missions in the area of conflict prevention, crises-control, humanitarian, peacemaking, peacekeeping, participation in Total Defence[clarification needed] in cooperation with civilian resources and finally maintenance of a sizable force to execute these tasks at all times.

Since 1988, Danish defence budgets and security policy have been set by multi-year agreements supported by a wide parliamentary majority including government and opposition parties. However, public opposition to increases in defence spending—during a period when economic constraints require reduced spending for social welfare—has created differences among the political parties regarding a broadly acceptable level of new defence expenditure.

The latest Defence agreement ("Defence agreement 2005–2009") was signed June 10, 2004, and calls for a significant re-construction of the entire military. From now about 60% support structure and 40% combat operational capability, it is to be 40% support structure and 60% combat operational capability, i.e. more combat soldiers and fewer "paper"-soldiers. The reaction speed is increased, with an entire brigade on standby readiness; the military retains the capability to continually deploy 2,000 soldiers in international service or 5,000 over a short time span. The standard mandatory conscription is modified. Generally this means fewer conscripts, less service time for them and only those who choose so, will continue into the reaction force system.

The Danish Defence Force, counting all branches and all departments, itself has an income equal to about 1–5% of its expenditures, depending on the year. They are not deducted in this listing.

Approximately 95% of the budget goes directly to running the Danish military including the Home guard. Depending on year, 50–53% accounts for payment to personnel, roughly 14–21% on acquiring new material, 2–8% for larger ships, building projects or infrastructure and about 24–27% on other items, including purchasing of goods, renting, maintenance, services and taxes.

Because Denmark has a small and highly specialized military industry, the vast majority of the Danish Defence's equipment is imported from NATO and the Nordic countries.[11]

There has been a right of conscientious objection since 1917. [20]