The Danish resistance movement (Danish: Modstandsbevægelsen) was an underground insurgency to resist the German occupation of Denmark during World War II. Due to the initially lenient arrangements, in which the Nazi occupation authority allowed the democratic government to stay in power, the resistance movement was slower to develop effective tactics on a wide scale than in some other countries.

By 1943, many Danes were involved in underground activities, ranging from producing illegal publications to spying and sabotage. Major groups included the communist BOPA (Danish: Borgerlige Partisaner, Civil Partisans) and Holger Danske, both based in Copenhagen. Resistance agents killed an estimated 400 persons-until 1944 they were Danish Nazis, informers and collaborators. After that date, they also killed some German nationals.

In the postwar period, the Resistance was supported by politicians within Denmark and there was little effort to closely examine the liquidations. Studies were made in the late 20th and early 21st centuries, and people learned that there was sometimes improvised and contingent decisionmaking about the targets, with some morally ambiguous choices. Several important books and films have been produced on this topic.

During the invasion of Denmark on April 9, 1940 and subsequent occupation, the Danish king and government chose not to flee the country and instead collaborated with the German authorities who allowed the Danish government to remain in power. The Germans had reasons to do so, especially as they wanted to showcase Denmark as a "model protectorate." As the democratically elected Danish government remained in power, Danish citizens had less motivation to fight the occupation than in countries where the Germans established puppet governments, such as Norway or France. The police also remained under Danish authority and led by Danes.

Daily life in Denmark remained much the same as before the occupation. The Germans did make certain changes: imposing official censorship, prohibiting dealings with the Allies, and stationing German troops in the country. The Danish government actively discouraged violent resistance because it feared a severe backlash from the Germans against the civilian population.

Immediately after the occupation, isolated attempts were made to set up resistance and intelligence activities. Intelligence officers from the Danish army, known as the "Princes," began channeling reports to London allies as early as April 13, 1940. Soon afterwards, Ebbe Munck, a journalist from Berlingske Tidende, arranged to be transferred to Stockholm. From there he could more easily report to and communicate with the British.[1]

Following the Nazi invasion of the Soviet Union on June 22, 1941 the Germans banned the Danish Communist Party and had the Danish police arrest its members.[2] Those members who either avoided arrest or later escaped thus went underground and created resistance cells. From October 1942, they published a clandestine newspaper, Land og Folk ("Land and People"), which was distributed widely across the country. Circulation grew to 120,000 copies per day by the end of the occupation.[3] At the beginning of 1943, the cells were centrally coordinated under BOPA (Borgerlige Partisaner - Civil Partisans), which also began to plan acts of sabotage.

As time went on, many other insurgent groups formed to oppose the occupation. These included the Hvidsten group, which received weapons parachuted by the British, and Holger Danske, which was successful in organizing sabotage activities and the assassinations of collaborators. The Churchill club, a group of eight schoolboys from Aalborg, performed some 25 acts of sabotage against the Germans.

When the Germans forced the Danish government to sign the anti-Comintern pact, a large protest broke out in Copenhagen.

The number of Danish Nazis was low before the war, and this trend continued throughout the occupation. This was confirmed in the 1943 parliamentary elections, in which the population voted overwhelmingly for the four traditional parties, or abstained. The latter option was widely interpreted as votes for the Danish Communist Party. The election was a disappointment for the National Socialist Workers' Party of Denmark (DNSAP) and German Reichsbevollmächtigter. Dr. Werner Best abandoned plans to create a government under Danish Nazi leader Frits Clausen, due to Clausen's lack of public support.

In 1942-43, resistance operations gradually shifted to more violent action, most notably acts of sabotage. Various groups succeeded in making contacts with the British Special Operations Executive (SOE) which began making airdrops of agents and supplies. There were not many drops until August 1944, but they increased through the end of the occupation.

On 23 April 1940,[4] members of Danish military intelligence established contacts with their British counterparts through the British diplomatic mission in Stockholm. The first intelligence dispatch was sent by messenger to the Stockholm mission in the autumn of 1940. This evolved into regular dispatches of military and political intelligence, and by 1942-43, the number of dispatches had increased to at least one per week.[4] In addition, an employee of Danmarks Radio was able to transmit short messages to Britain through the national broadcasting network.

The intelligence was gathered mostly by officers in the Danish army and navy; they reported information about political developments, the location and size of German military units, and details about the Danish section of the Atlantic Wall fortifications. In 1942, the Germans demanded the removal of the Danish military from Jutland, but intelligence operations continued. It was carried out by plainclothes personnel or by reserve officers, since this group was not included in the evacuation order.[4] Following the liberation of Denmark, Field Marshal Bernard Law Montgomery described the intelligence gathered in Denmark as "second to none".[5]

As the years went by, the number of acts of sabotage and violence grew. In 1943, the number grew dramatically, to the point that the German authorities became dissatisfied with the Danish authorities' handling of the situation. At the end of August, the Germans took over full administration in Denmark, which allowed them to deal with the population as they wished. Policing became easier for the Nazis, but more and more people became involved with the movement because they were no longer worried about protecting the Danish government.

In particular, the Danish Freedom Council was set up in September 1943, bringing together the various resistance groups in order to improve their efficiency and resolve. An underground government was established. Allied governments, who had been skeptical about Denmark's commitment to fight Germany, began recognizing it as a full ally.[6]

Due to concerns about prisoners and information held in Gestapo headquarters at the Shellhus in the centre of Copenhagen, the resistance repeatedly requested a tactical RAF raid on the headquarters to destroy records and release prisoners. Britain initially turned down the request due to the risk of civilian casualties, but eventually launched Operation Carthage, a very low-level raid by 20 de Havilland Mosquito fighter-bombers, escorted by 30 P-51 Mustang fighters. The raid succeeded in destroying the headquarters, releasing 18 prisoners of the Gestapo, and disrupting anti-resistance operations throughout Denmark. It cost 125 civilian deaths (including 86 schoolchildren and nearly 20 adults) at a nearby boarding school. 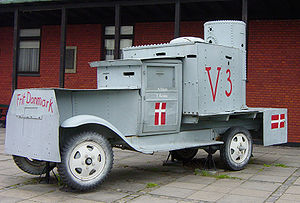 Railway shop workers in Frederiksværk built this armored car for offensive use by the Danish resistance. It was employed against Danish Nazis, known as the Lorenzen group, entrenched in the plantation of Asserbo in North Zealand, May 5, 1945. 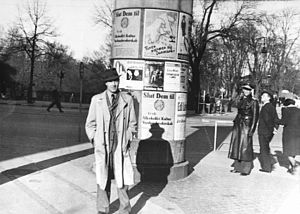 An American pilot in occupied Copenhagen is watched over by the Danish resistance. March, 1945.

In 1943, the movement scored a great success in rescuing all but 500 of Denmark's Jewish population of 7,000-8,000 from being sent to the Nazi concentration camps by helping transport them to neutral Sweden, where they were offered asylum.[7][8] The Danish resistance movement has been honoured as a collective at Yad Vashem in Israel as being part of the "Righteous Among the Nations".[9][10] They were honoured as a collective rather than as individuals at their own request.[citation needed]

Another success was the disruption of the Danish railway network in the days after D-Day, which delayed the movement of German troops to France as reinforcements.

By the end of the war, the organized resistance movement in Denmark had scored many successes. It is believed to have killed nearly 400 persons (the top official number is 385) from 1943 through 1945, who were Danish Nazis, informers or collaborators thought to pose a threat to the Resistance, or Danes working for the Gestapo.[11] The rationale behind the executions was discussed, and several accounts by participants said a committee identified targets, but no historic evidence of this system has been found.[11] In the postwar period, while the killings were criticized, they were also defended by such politicians as Frode Jakobsen and Per Federspiel.

The movement lost slightly more than 850 members, in action, in prison, in Nazi concentration camps, or (in the case of 102 resistance members[12]) executed following a court-martial.

The Danish National Museum maintains the Museum of Danish Resistance in Copenhagen.

With the 60th anniversary of the end of the war, the issue was re-examined in two new studies: Stefan Emkjar's Stikkerdrab and Peter Ovig Knudsen's Etter drabet, "the first profound approaches into the topic."[14] Both authors used veterans of the resistance movement, and covered the sometimes contingent, improvised nature of some of the actions. It suggested that some of the noted Bent Faurschou-Hviid (Flammen)'s executions may have been mistakenly directed by a double agent.[15] Knudsen's work was adapted as a 2-hour documentary film, With the Right to Kill (2003), which was shown on TV and later released in theaters.[16] These works have contributed to a national discussion on the topic. Flame and Citron (Flammen og Citronen, 2008) is a fictionalized drama film based on historic accounts of the two prominent Danish resistance fighters, directed by Ole Christian Madsen. It portrays some of the moral ambiguity of their actions.

The extent to which the Danish resistance played an important strategic role in the war has been the subject of much discussion. Immediately after the war and until about 1970, the vast majority of accounts overrated the degree to which the resistance had been effective in battling against the Germans by acts of sabotage and by providing key intelligence to the Allies. More recently, however, after re-examining the archives, historians concur that, while the resistance provided a firm basis for moral support and paved the way for post-war governments, the strategic effect during the occupation was limited. The Germans did not need to send in reinforcements to suppress the movement, and garrisoned a comparatively small number of Wehrmacht troops to defend the country. The resistance did not enter into active combat. Even the overall importance of Danish intelligence in the context of Ultra is questionable.[17]

"caused strain and embarrassment to the enemy...[and a] striking reduction in the flow of troops and stores from Norway [that] undoubtedly had an adverse effect on the reinforcements for the battles East and West of the Rhine."[18]

Examining the British archives, Jespersen also found a report concluding "that the overall effect of Danish resistance was to restore national pride and political unity."[18] He agreed that this was the movement's most important contribution to the nation.[18]