Dating is process of estimating the age of ancient materials and deposits remains or determining a chronology or calendar of events in the history of Earth. Dating material drawn from the archaeological record can be made by a direct study of an artifact, or may be deduced by association with materials found in the context the item is drawn from or inferred by its point of discovery in the sequence relative to datable contexts. Dating is carried out mainly post excavation, but to support good practice, some preliminary dating work called "spot dating" is usually run in tandem with excavation. Dating is very important in archaeology for constructing models of the past, as it relies on the integrity of dateble objects and samples. Many disciplines of archaeological science are concerned with dating evidence.

Absolute dating methods rely on using some physical property of an object or sample to calculate its age. Examples are:

Relative or indirect methods tend to use associations built from the archaeological body of knowledge. An example is seriation, which may use the known style of artefacts such as stone tools or pottery. Ultimately, relative dating relies on tying into absolute dating with reference to the present. One example of this is dendrochronology which uses a process of tying floating chronologies of tree rings together by cross referencing a body of work.

In practice several different dating techniques must be applied in some circumstances, thus dating evidence for much of an archaeological sequence recorded during excavation requires matching information from known absolute or some associated steps, with a careful study of stratigraphic relationships.

Paleomagnetism: the polarity of the Earth changes at a knowable rate. This polarity is stored within rocks; through this the rock can be dated.

Tephrochronology: volcanic ash has its own signature for each eruption. In a sedimentary sequence the associated material within the ash layer can be dated, giving a date for the eruption. If this ash is found anywhere else in the world, a date will already be known (bearing in mind transportation time).

Oxygen isotope chronostratigraphy: this is based on the climatic stages displayed in SPECMAP relating to different cold and warm stages experienced in deep time; for example, point 5.5 in the SPECMAP chronology describes the peak of the last interglacial 125,000 years ago.

Archaeologists investigating a site may wish to date the activity rather than artifacts on site by dating the individual contexts which represents events. Some degree of dating objects by their position in the sequence can be made with known datable elements of the archaeological record or other assumed datable contexts deduced by a regressive form of relative dating which in turn can fix events represented by contexts to some range in time. For example, the date of formation of a context which is totally sealed between two datable layers will fall between the dates of the two layers sealing it. However the date of contexts often fall in a range of possibilities so using them to date others is not a straightforward process. 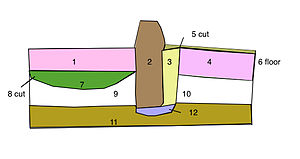 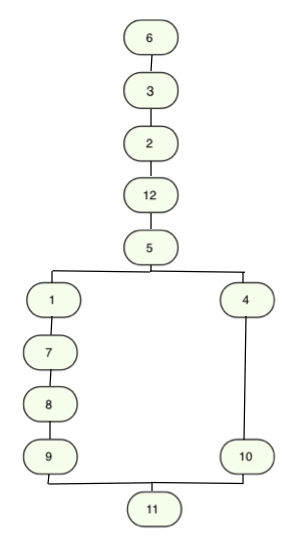 Take the hypothetical section fig A. Here we can see 12 contexts, each numbered with a unique context number and whose sequence is represented in the Harris matrix in fig B.

If we know the date of context 1 and context 9 we can deduce that context 7, the backfilling of pit 8, occurred sometime after the date for 9 but before the date for 1, and if we recover an assemblage of artifacts from context 7 that occur nowhere else in the sequence, we have isolated them with a reasonable degree of certainty to a discrete range of time. In this instance we can now use the date we have for finds in context 7 to date other sites and sequences. In practice a huge amount of cross referencing with other recorded sequences is required to produce dating series from stratigraphic relationships such as the work in seriation.

One issue in using stratigraphic relationships is that the date of artifacts in a context does not represent the date of the context, but just the earliest date the context could be. If we look at the sequence in fig A, we may find that the cut for the construction of wall 2, context 5, has cut through layers 9 and 10, and in doing so has introduced the possibility that artifacts from layers 9 and 10 may be redeposited higher up the sequence in the context representing the backfill of the construction cut, context 3. These artifacts are referred to as "residual" or "residual finds". It is crucial that dating a context is based on the latest dating evidence drawn from the context. We can also see that if the fill of cut 5 — the wall 2, backfill 3 and trample 12 — are not removed entirely during excavation because of "undercutting", non-residual artifacts from these later "higher" contexts 2, 3 and 12 could contaminate the excavation of earlier contexts such as 9 and 10 and give false dating information. These artifacts may be termed intrusive finds.