From Infogalactic: the planetary knowledge core
Jump to: navigation, search
This article is about the 1633 Vincentian organization. For other religious orders, or branches, see Sisters of Charity.
For other uses, see Daughters of Charity (disambiguation). 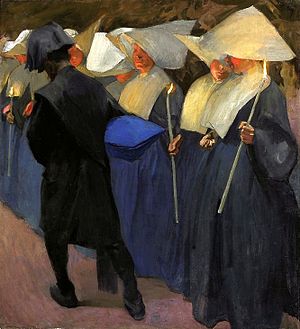 A painting of cornette-wearing Daughters of Charity by pl (Karol Tichy), depicting a funeral in an orphanage run by the sisters (National Museum in Warsaw).

The Company of the Daughters of Charity of Saint Vincent de Paul (Latin: Societas Filiarum Caritatis a S. Vincentio de Paulo), called in English the Daughters of Charity or Sisters of Charity of Saint Vincent De Paul is a Society of Apostolic Life for women within the Catholic Church. Its members make annual vows throughout their life, which leaves them always free to leave, without need of ecclesiastical permission. They were founded in 1633 and are devoted to serving Jesus Christ in persons who are poor through corporal and spiritual works of mercy.

They have been popularly known in France as "the Grey Sisters" from the colour of their traditional religious habit, which was originally grey, then bluish grey. The 1996 publication The Vincentian Family Tree presents an overview of related communities from a genealogical perspective.[1] They use the initials D.C. after their names.

The institute was founded by Saint Vincent de Paul, a French priest, and Saint Louise de Marillac, a widow. The need of organization in work for the poor suggested to de Paul the forming of a confraternity among the women of his parish in Châtillon-les-Dombes. It was so successful that it spread from the rural districts to Paris, where noble ladies often found it hard to give personal care to the needs of the poor. The majority sent their servants to minister to those in need, but the work was often slighted as unimportant. Vincent de Paul remedied this by referring young women who inquired about serving persons in need to go to Paris and devote themselves to this ministry under the direction of the Ladies of Charity. Marguerite Naseau, a 34-year-old woman from the countryside in Suresnes, met Vincent de Paul with other priests of the Congregation of the Mission during one of his Missions of Evangelization. In 1630 she met up with Vincent and Louise in Paris, where they suggested that she help the Ladies of Charity.[2]

These young women formed the nucleus of the Company of the Daughters of Charity now spread over the world. On 29 November 1633, the eve of St. Andrew, de Marillac began a more systematic training of the women, particularly for the care of the sick. The sisters lived in community in order to better develop the spiritual life and thus, more effectively, carry out their mission of service. The Daughters of Charity differed from other religious congregations of that time in that they were not cloistered. They maintained the necessary mobility and availability and lived among those whom they served.[2] From the beginning, the community motto was: "The charity of Christ impels us!"

The newly formed Daughters of Charity set up soup kitchens, organized community hospitals, established schools and homes for orphaned children, offered job training, taught the young to read and write, and improved prison conditions. The hospital of St John the Evangelist in the province of Angers was the first hospital entrusted to the care of the Daughters of Charity.[3] Louise de Marillac and Vincent de Paul both died in 1660, and by this time there were more than forty houses of the Daughters of Charity in France, and the sick poor were cared for in their own dwellings in twenty-six parishes in Paris. 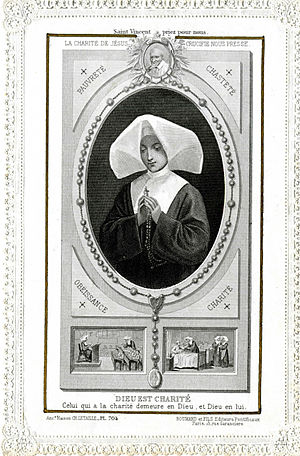 Anticlerical forces in the French Revolution were determined to shut down all convents. In 1789 France had 426 houses; the sisters numbered about 6000 in Europe. In 1792, the sisters were ordered to quit the motherhouse; the community was officially disbanded in 1793.[4] An oath to support the Revolution was imposed on all former members of religious orders who performed a service that was remunerated by the state. Taking this oath was seen as breaking off with the Church while those who refused to do so were considered counter-revolutionaries.

In Angers, revolutionary authorities decided to make an example of sisters Marie-Anne Vaillot and Odile Baumgarten in order to demonstrate what refusal to take the oath would mean. In early 1794 they faced a public execution. At a ceremony in Rome on 19 February 1984 Pope John Paul II beatified ninety-nine persons who died for the faith in Angers, including Vaillot and Baumgarten.[3] Their feast day is February 1.

Sister Marguerite Rutan was Superior of the community that staffed the hospital at Dax. The six sisters had refused to take the revolutionary oath. The Revolutionary committee wanted to remove the Superior of the Sisters and looked for a motive to arrest her. A false testimony allowed them to say that Sr. Marguerite was unpatriotic, a fanatic against the principles of the Revolution and that she tried to convince the wounded soldiers to desert and join the royalist army of Vendéens. On April 9, 1794 Sister Marguerite Rutan was condemned to death and guillotined at Poyanne Place not far from the prison.[2] She was beatified Sunday, June 19, 2011 in Dax, France. Her feast day is June 26.

Sisters Marie-Madeleine Fontaine, Marie-Françoise Lanel, Thérèse Fantou, Jeanne Gérard from the House of Charity in Arras were guillotined in Cambrai June 26, 1794. Waiting for the cart to take them to the guillotine, the guards took their chaplets and, not knowing what to do, put them on their heads like a crown. They were beatified on June 13, 1920. Their feast day is June 26.[2]

The order was restored in 1801, many former sisters returned, and it grew very rapidly throughout the 19th century. 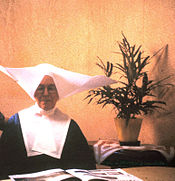 Until 1964, their traditional religious habit included a large, starched cornette on the head. 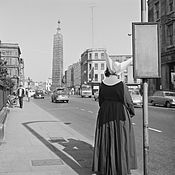 A Daughter of Charity shown with the distinctive head gear, Ireland, 1964.

From that time and through the 19th century, the community spread to Austria, Australia, Hungary, Ireland, Israel, Portugal, Turkey, Britain and the Americas.[4] During this period, the ministry of the Daughters developed to caring for others in need such as orphans and those with physical disabilities.

The first house in Ireland was opened in Drogheda, in 1855. By 1907 there were 46 houses and 407 sisters in England; 13 houses and 134 sisters in Ireland; 8 houses and 62 sisters in Scotland. They operated 23 orphanages; 7 industrial schools; 24 public elementary schools; 1 normal school to train teachers; 3 homes for working girls or women ex-convicts; and 8 hospitals.[4] 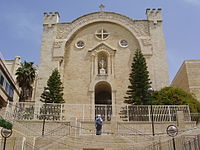 The Convent of Saint Vincent de Paul was the first building established on Mamilla Street in Jerusalem, near Jaffa Gate, in 1886. Precipitating the future growth of that street as a commercial thoroughfare, the nuns put up a series of shops in front of the building and used the rent money for convent operations.[5] The convent was integrated into the design of the Mamilla Mall pedestrian promenade, which opened in 2007.[6]

The motherhouse of the Daughters of Charity is located at 140 rue du Bac, in Paris, France. The remains of de Marillac and those of St. Catherine Labouré lie preserved in the chapel of the motherhouse. Labouré was the Daughter of Charity to whom, in 1830, the Blessed Virgin Mary is said to have appeared, commissioning her to spread devotion to the Medal of Mary Immaculate, commonly called the Miraculous Medal.

The traditional habit of the Daughters of Charity was one of the most conspicuous of Catholic Sisters, as it included a large starched cornette on the head. This was the dress of peasant women of the neighborhood of Paris at the date of the foundation, a grey habit with wide sleeves and a long grey apron. The head-dress was at first a small linen cap, but to this was added in the early days the white linen cornette. At first it was used only in the country, being in fact the headdress of the Ile de France district, but in 1685 its use became general. The institute adopted a more simple modern dress and blue veil on 20 September 1964.

The Charism of a religious society is the characteristic impetus which distinguishes it from other similar groups. Religious communities frequently describe it as a grace or gift given by God as inspiration to the founder, which lives on in the organization. The charism of the Daughters of Charity of St. Vincent de Paul is that of service to persons who are poor.[7]

See: Sisters of Charity Federation in the Vincentian-Setonian Tradition

By then, other communities had been established elsewhere in the United States. In 1817, Mother Seton sent three Sisters to New York at the invitation of Bishop Connolly to open a home for dependent children. Their services were urgently needed, for many parents were victims of the epidemics that frequently invaded the city, where there was as yet no system of sanitation. In 1846, the New York congregation incorporated as a separate order, the Sisters of Charity of New York. The Sisters in New York retained the rule, customs, and spiritual exercises established by Mother Seton, and her black habit, cape and cap.[8]

During the American Civil War, the order provided nursing services to soldiers in field hospitals and in depots for prisoners of war.[9]

The Spanish–American War of 1898, quickly demonstrated the important need for trained nurses as hastily constructed army camps for more than twenty-eight thousand members of the regular army were devastated by diarrhea, dysentery, typhoid fever, and malaria—all of which took a much greater toll than did enemy gunfire. The United States government called for women to volunteer as nurses. Thousands did so, but few were professionally trained. Among the latter were 250 Catholic nurses, most of them from the Daughters of Charity of St. Vincent de Paul. Reverend Mother Mariana Flynn, head of the Daughters of Charity, recalled their service during the Civil War and said her sisters were proud to be "back in the army again, caring for our sick and wounded."[10]

As of 2015, 18,000 serve in ninety-four countries, addressing needs of food, water, sanitation and shelter; and through their sustaining works including health care, HIV/AIDS, migrant and refugee assistance, and education.[11]

In July 2011 the Daughters of Charity merged four of the five existing U.S. provinces — Emmitsburg, Maryland; Albany, New York; St. Louis, Missouri; and Evansville, Indiana. The process of unification began at a 2007 gathering in Buffalo, N.Y. The Province of the West, based in Los Altos Hills, Calif., was not involved in the merger. The newly constituted province is named for St. Louise de Marillac, who founded the congregation in France in 1633 along with St. Vincent de Paul to “serve Christ in persons who are poor.” Administrative offices for the Province of St. Louise are located in St. Louis, Mo. The archival collections of the former provinces will be consolidated in a new facility located within the former St. Joseph’s Provincial House, adjacent to The Basilica of the National Shrine of St. Elizabeth Ann Seton and the Seton Heritage Center, in Emmitsburg, Maryland.[12] The new province covers 34 states, the District of Columbia and the Canadian province of Quebec. 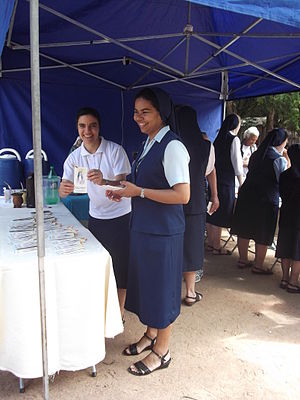 Many hospitals, orphanages, and educational institutions were established and operated by the Daughters of Charity over the years, including Saint Joseph College, Emmitsburg, Maryland, Marillac College in Missouri, Santa Isabel College Manila, Saint Louise's Comprehensive College in Belfast, Northern Ireland, and Saint Louise de Marillac High School in Illinois. Though no longer staffed and run by the Daughters, five of the hospitals which were founded by them in the USA continue to operate within the St. Vincent's Health Care System.[13]

In the United Kingdom, the Daughters of Charity are based at Mill Hill, north London, and have registered charity status.[15]

Some members of the Daughters of Charity of Saint Vincent de Paul, who are venerated by the Catholic Church include: