Dauphin County /ˈdɔːfɪn/ is a county in the U.S. state of Pennsylvania. As of the 2010 census, the population was 268,100.[2] The county seat and the largest city is Harrisburg,[3] Pennsylvania's state capital and tenth largest city. The county was created/"erected" on March 4, 1785, from part of Lancaster County and was named after Louis-Joseph, Dauphin of France,[4] the first son of Louis XVI.

Like most of the rest of the Susquehanna Valley, Dauphin County was once reliably Republican, and the commissioner majority and all county row offices remain in Republican hands. However, there has been a decided shift toward the Democrats in recent years, who overtook the Republican countywide registration during the summer of 2008. Bob Casey Jr. carried the county in the 2006 Senate election when he unseated Rick Santorum. According to the Dauphin County Board of Elections, in 2008 Barack Obama became the first Democratic presidential candidate to carry Dauphin County since 1964, receiving 9.0% more of the vote than John McCain. The other three statewide winners (Rob McCord for Treasurer, Jack Wagner for Auditor General, and Tom Corbett for Attorney General) also carried Dauphin. [3]

In December 2015, the Commissioners adopted a new $5 per year car registration fee. The funds to be used for development programs. The County receives substantial dollars from the taxes on Gaming ($6.4 million in 2015).[18] The commissioners disperse these funds for community projects and development on an annual basis. The county also levies an annual property tax. Real estate tax levy is 6.876 millage. 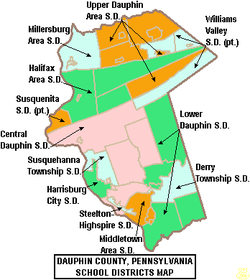 Colleges and universities nearby Dauphin County

The Capital Area Intermediate Unit 15 is a state approved education agency that offers: school districts, charter schools, private schools, and home school students, a variety of services including: a completely developed K–12 curriculum that is mapped and aligned with the Pennsylvania Academic Standards (available online), shared services, a group purchasing program and a wide variety of special education and special needs services.

The Dauphin County Library System provides library service to the residents of the county through a main central library in the state capital and county seat of Harrisburg, Pennsylvania and seven branch libraries. DCLS is a private, non-profit corporation. It is governed by a 17-member Board of Trustees, five appointed annually by the Dauphin County Commissioners, and twelve elected for three-year terms. The Library is a member of the Pennsylvania library system.

As reported by the National Center for Educational Statistics[23]

The largest employers in Dauphin County in 2013 were:

There are two Pennsylvania state parks in Dauphin County. 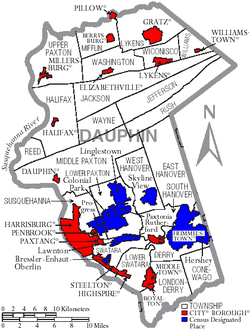 Under Pennsylvania law, there are four types of incorporated municipalities: cities, boroughs, townships, and, in at most two cases, towns. The following cities, boroughs and townships are located in Dauphin County: