Johnson was the starting second baseman for the Orioles when they won four American League (AL) pennants and two World Series championships between 1965 and 1972. He made four All-Star Game appearances and received the Rawlings Gold Glove Award three times. Johnson won the American League's Manager of the Year Award in 1997 when he led the Baltimore Orioles wire-to-wire to the American League East Division Championship. He won the same award in the National League in 2012 when he led the Nationals to the franchise's first division title since 1981.

His biggest success as a manager was when he led the Mets to the 1986 World Series title. The ball club captured the National League (NL) East under his watch in 1988. The teams he piloted in the three years from 1995 to 1997 all made it to their respective League Championship Series – the Cincinnati Reds in 1995 and the Orioles in both 1996 and 1997. He later managed the Dodgers and Nationals.

After one season playing baseball at Texas A&M University, Johnson signed with the Baltimore Orioles as an amateur free agent in 1962. After signing, Johnson was assigned to the Stockton Ports in the Class C (now Single A) California League where he hit .309 with 10 home runs and 63 runs batted in in 97 games. Moved up to AA Elmira in 1963, Johnson hit .326 in 63 games before being promoted to AAA Rochester for the final 63 games of the season. Returning to the Red Wings for the entire 1964 season, Johnson had 19 HRs, 73 RBI, and 87 runs.[1]

In 1965, Johnson made the Orioles out of spring training, but saw only limited time in 20 games (hitting .170) and spent the later part of the season in the minors, where he batted .301 in 52 games for the Red Wings (his final trip back to the minor leagues). Back with the Orioles in 1966, Johnson saw limited playing time until June 13 when the Orioles traded second baseman Jerry Adair to the Chicago White Sox to make room for Johnson at second base. He responded with a .257 batting average, seven HRs and 56 RBI to finish third in American League Rookie of the Year balloting for the 1966 World Series champions. Johnson would be a full-time starter in major leagues for the next eight seasons, averaging over 142 games played in a season. In the 1966 World Series, Johnson would win his first World Series ring and earn the distinction of being the last person to get a hit off of Sandy Koufax.[2]

Johnson reached the World Series again with the Orioles in 1969, 1970, and 1971, winning his second ring in 1970. He also won the AL Gold Glove Award at second base all three seasons. Orioles shortstop Mark Belanger won the award as well in 1969 and 1971, joining a select list of shortstop-second baseman combinations to have won the honor in the same season while playing together.[citation needed] Third baseman Brooks Robinson also was in the middle of his record 16 straight Gold Glove streak when Johnson and Belanger won their awards.

Following the 1972 season, one in which Johnson would hit only .221 in 118 games, he was traded along with starting pitchers Pat Dobson and Roric Harrison, and catcher Johnny Oates to the Atlanta Braves for minor league infielder Taylor Duncan and former National League Rookie of the Year catcher Earl Williams. The following season with the Braves, Johnson enjoyed the best statistical year of his career when his offense exploded and he tied Rogers Hornsby's record for most single-season home runs by a second baseman with 42 (Johnson actually hit 43 that year, but one came as a pinch hitter – The Sporting News Baseball Record Book, 2007 p. 23). The 1973 Braves featured the first trio of teammates ever to each hit 40 home runs in the same season when Johnson hit 43, Darrell Evans hit 41, and Hank Aaron hit 40. Johnson's second-highest home run total was 18, in the 1971 season.

Four games into the 1975 season and after getting a hit in his only at bat, Johnson was released by the Braves. He then signed with the Yomiuri Giants in the Japanese League and played with the team in both the 1975 and 1976 seasons. In 1977, he returned to the United States after signing as a free agent with the Philadelphia Phillies. Relegated to a utility infielder role, Johnson still hit .321 with 8 HRs in 78 games and played in one game in the Phillies National League Championship Series loss to the Dodgers.

During the 1978 season, Johnson hit two grand slam home runs as a pinch-hitter, becoming the first major leaguer to do it in a season.[3] Four other players, Mike Ivie of the San Francisco Giants (1978), Darryl Strawberry of the New York Yankees (1998), Ben Broussard of the Cleveland Indians (2004), and Brooks Conrad of the Atlanta Braves (2010), would go on to equal Johnson's feat.[4] Shortly afterwards, Philadelphia dealt him to the Chicago Cubs, where he played the final 24 games of his career before retiring at the end of the season.

In 1979, Johnson was hired to be the manager of the Miami Amigos of the AAA Inter-American League. Although Johnson guided the team of released and undrafted players to a .708 winning percentage, the league folded 72 games into its only season; they planned to play a 130-game season.[5] In 1981, Johnson was hired to manage the New York Mets AA team, the Jackson Mets, and he led the team to a 68-66 record in his only season with the team. In 1983, Johnson was named as the manager of the Mets AAA Tidewater Tides, who finished with a 71-68 record. 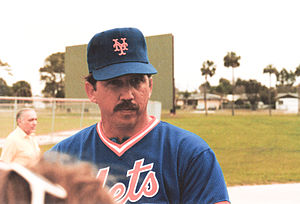 Johnson took over the Mets in 1984; the team had not won a pennant since 1973, in 1984. Johnson became the first National League manager to win at least 90 games in each of his first five seasons. The highlight of his time with the Mets was winning the 1986 World Series against the Boston Red Sox. While with the Orioles in 1969, Johnson was the final out in the Miracle Mets World Series win.

However, Johnson rankled Mets management with his easygoing style. Years later, he summed up his approach to managing by saying, "I treated my players like men. As long as they won for me on the field, I didn't give a flying fuck what they did otherwise."[6] When the Mets struggled early in the 1990 season, starting the season 20-22, he was fired. He remains the winningest manager in Mets history and was inducted into the Mets Hall of Fame with Frank Cashen, Darryl Strawberry, and Dwight Gooden on August 1, 2010.

After more than two seasons out of baseball, the Cincinnati Reds hired Johnson 44 games into the 1993 season. As was the case with the Mets, Johnson revived the Reds almost immediately. He led the team to the National League Central lead at the time of the 1994 players' strike and won the first official NL Central title in 1995. However, early in the 1995 season, Reds owner Marge Schott announced Johnson would not return in 1996, regardless of how the Reds did. Schott named former Reds third baseman Ray Knight (who had played for Johnson on the Mets championship team) as bench coach, with the understanding that he would take over as manager in 1996.

Johnson and Schott had never gotten along, and relations had deteriorated to the point that he had nearly been fired after the 1994 season. By most accounts, the final straw came because Schott did not approve of Johnson living with his fiancée Susan before they were married. According to The Washington Post, Schott had decided before the 1995 season even started that it would be Johnson's last one in Cincinnati.[7]

In 1996, Johnson returned to Baltimore as the Orioles' manager and the team earned a wild-card playoff berth in his first season. It was the Orioles' first trip to the postseason since winning the 1983 World Series, and the American League East title in 1997.

However, Johnson and Orioles owner Peter Angelos never got along. In fact, the two men almost never spoke to each other. The end reportedly came when Johnson fined Roberto Alomar for skipping a team banquet in April 1997 and an exhibition game against AAA Rochester during the 1997 All-Star Break. Johnson ordered Alomar to pay the fine by making out a check for a fine to a charity for which his wife served as a fundraiser. However, Alomar donated the money to another charity after players' union lawyers advised him of the possible conflict of interest. In negotiations after the season, Angelos let it be known that he was considering firing Johnson for the Alomar fine. Johnson was prepared to admit he'd made an error in judgment regarding the fine, but Angelos demanded that Johnson admit that he'd acted recklessly in not leaving the decision to him—which presumably would have given Angelos grounds to fire Johnson for cause. Johnson refused to do so, and offered his resignation—which Angelos accepted on the same day that Johnson was named American League Manager of the Year.[7] The Orioles would not have another winning season (or make the post-season) again until 2012.

Johnson during the World Baseball Classic

In 1999, Johnson was hired as manager of the Los Angeles Dodgers. Johnson suffered the only full losing season of his managerial career (as of the 2012 season), finishing in third place eight games under .500. While the Dodgers rebounded to second place the next year, it was not enough to save Johnson's job.

Johnson briefly managed the Netherlands national team in 2003 during the absence of Robert Eenhoorn, then served as a bench coach under Eenhoorn at the 2004 Summer Olympics.[8] He then became manager of Team USA, where he managed the United States team to a seventh-place finish out of an 18-team field in the 2005 Baseball World Cup, held in The Netherlands. The team finished tied for second in its group during group play with a 6–2 record before falling, 11–3, to eventual winner and 24-time World Cup champion Cuba in the quarterfinals. A subsequent 9–0 loss to Nicaragua put the Americans into the seventh-place game with Puerto Rico, where they prevailed with an 11–3 win.

Johnson first joined the Washington Nationals front office on June 7, 2006 when he was appointed as a consultant by then-vice president/general manager Jim Bowden.[10] He was named a senior advisor to current GM Mike Rizzo after the 2009 campaign. He became the Nationals manager on June 26, 2011 after the unexpected resignation of Jim Riggleman three days earlier. He served as manager for the rest of the 2011 season. On October 31, the Nationals announced that Davey Johnson would be their manager for the 2012 season.[11]

On October 1, 2012, Johnson led the Nationals to the franchise's first division title since 1981 (when they were the Montreal Expos), eventually achieving a franchise-record 98 wins—the most wins in baseball that year. On November 10, Johnson signed a contract to return as manager of the Nationals for 2013. On November 13, Johnson was named National League Manager of the Year.[12] On September 29, 2013, Johnson announced his retirement. In 2014, he became a consultant.[13]

Johnson was born in Orlando, Florida. He graduated from Alamo Heights High School in San Antonio, Texas.[15] He also attended the Johns Hopkins University and Texas A&M University, and graduated from Trinity University in 1964 with a bachelor's degree in mathematics.[15] Johnson is known for taking a statistical approach to baseball, and pioneered computer-based sabermetrics while managing the Mets.[16]

Johnson's daughter, Andrea, was a nationally ranked amateur surfer in the late 1980s. Andrea died in 2005 from septic shock and complications from schizophrenia.[17]