David Bremner Henderson (March 14, 1840 – February 25, 1906), a ten-term Republican Congressman from Dubuque, Iowa, was the Speaker of the United States House of Representatives from 1899 to 1903. He was the first Congressman from west of the Mississippi River, the last Civil War veteran, the second foreign-born person (after Charles Frederick Crisp), and so far the only Iowan to serve as Speaker.

Henderson was born in Old Deer, Scotland on March 14, 1840. He emigrated to the United States with his parents, who initially settled in Winnebago County, Illinois, in 1846. His family soon moved to a farm near Clermont, in Fayette County, Iowa in 1849. He attended the common schools, and the Upper Iowa University at Fayette, Iowa.

He served in the Union Army during the Civil War and was wounded severely twice, once in the neck and later in the leg, which resulted in progressive amputations of that leg. He initially enlisted in the Union Army on September 15, 1861, as a private in Company C, 12th Iowa Volunteer Infantry Regiment. He was elected and commissioned first lieutenant of that company. In the Battle of Fort Donelson, he was shot in the neck in the final charge over the breastworks.[1] After returning to the Regiment in April 1862, he lost one foot and part of one leg at the Second Battle of Corinth in October 1862.[2] He was discharged on February 26, 1863 due to his wounds, and returned to Iowa. After serving as commissioner of the board of enrollment of the third district of Iowa from May 1863 to June 1864, he re-entered the Army as colonel of the new 46th Iowa Volunteer Infantry Regiment, one of the "Hundred Days Men" regiments, and commanded the Regiment until it was mustered out in September 1864.[3]

He was a successful lawyer prior to pursuing his political career. After studying law, he was admitted to the bar in 1865 and commenced practice in Dubuque. He was the collector of internal revenue for the third district of Iowa from November 1865 to June 1869, when he resigned to accept a position as Assistant U.S. Attorney for the Northern District of Iowa, where he served until 1871. He was in private practice in Dubuque until 1882.[1]

In 1882, he was elected as a Republican to represent Iowa's 3rd congressional district in the U.S. House. He served in the Forty-eighth and the nine succeeding Congresses, from March 4, 1883 to March 4, 1903. He first ran for Speaker following the 1888 elections,[4] finishing well behind Thomas Brackett Reed and runner-up William McKinley.[5] Prior to his election as speaker, he served as the chairman of the Committee on Militia (in the Fifty-first Congress), and chairman of the Committee on the Judiciary (in the Fifty-fourth and Fifty-fifth Congresses). He was also the ranking Republican on the House Committee on Appropriations during the period of Democratic control, but when Republicans returned to control of the House after the 1894 elections, Speaker Reed departed with tradition by returning the chairmanship to Joseph Gurney Cannon, who had served more nonconsecutive terms in the House and would have outranked Henderson had Cannon not lost his House seat for two years.

Henderson was an aggressive debater and an intense Republican partisan. He seems to have loved a fight; he got into enough of them from his very first term, exercising his power of personal vituperation and abuse against Democrats whenever he found grounds to do so. "I would rather spend an eternity in hell with a Confederate than an eternity in heaven with a northern Copperhead," he told one crowd. (It says something about the temper of Iowa politics that the Dubuque Herald, a Democratic organ, placed those words at the masthead of its editorial page throughout the 1886 campaign, not to emphasize Henderson's intolerance of political differences, but his use of profanity.)[6] His secret for political success came from combining mainstream Republican causes with those dear to the hearts of his farmland constituency. In the summer of 1886, he led House forces in favor of levying a high tax on oleomargarine. At the same time he sponsored a bill to raise the benefits for veterans' widows by fifty percent. (On the final passage of another bill he favored, increasing the pensions of disabled veterans, Henderson withheld his vote, since he would stand among the beneficiaries). His commitment to pension legislation, general and individual, marked his whole career and took up most of his time. No member did more than he in that respect.[7]

Speaker of the House 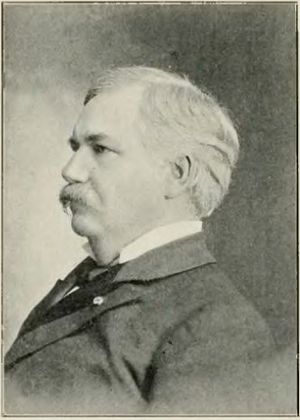 Henderson was elected to succeed Reed as Speaker following Reed's resignation from the post in 1899. Republicans were in control in the House, a majority of members of the House Republican Caucus were from what was then considered "the West," and Henderson was the only serious candidate for Speaker among western members.[8] When serving as Speaker in the Fifty-sixth and Fifty-seventh Congresses, by longstanding tradition Henderson also held the role as chairman of the Committee on Rules.

During his four-year tenure as Speaker of the House, many of his peers lobbied him to run for the presidency even though the United States Constitution forbade it because he was foreign born.

On September 16, 1902 - with the next Congressional election less than two months away - Henderson surprised nearly everyone by announcing that he was withdrawing from the race for re-election (and thus from Congress).[9] Various explanations for his abrupt withdrawal have been offered. Henderson's letter announcing his decision referred to "a growing sentiment, among Republicans, that I do not truly represent their views on the tariff question."[10] Some attributed his decision to the lingering effects of his war injuries.[1][3] In a letter to Henderson’s successor Joe Cannon dated three days after Henderson's announcement, former House Clerk Henry H. Smith stated that "there can be but one explanation of the reason for his action [the resignation] . . . they relate not alone to poker playing, but to his alleged intimacy with a certain `lobbyess' who is reported to have some written evidence that would greatly embarrass the Speaker. . . . He seemed to have lost all control of himself and become reckless. . . . This is not mere guesswork at all but private and reliable information which I am sure you will recognize when I tell you the name." - [11] Whatever the cause, Henderson's resignation ushered in the beginning of Cannon's famous tenure as Speaker.

After leaving Congress, Henderson practiced law in New York City until health problems caused him to retire to Southern California.[1] Henderson died in Dubuque on February 25, 1906, aged 65. He is buried at Linwood Cemetery in Dubuque.

His portrait hangs in the speakers' room in the U.S. Capitol, and statues of Henderson by J. Massey Rhind are found the collections of the Iowa State Historical Society and in Clermont.[1]

"Allison-Henderson Park," in Dubuque, shares his name with that of six-term U.S. Senator William B. Allison, another citizen of Dubuque.