Most noted for his contributions to the field of optics, he studied the double refraction by compression and discovered the photoelastic effect,[2] which gave birth to the field of optical mineralogy.[3] For his work, William Whewell dubbed him the "Father of modern experimental optics" and "the Johannes Kepler of Optics."[4]

He is well-recognized for being the inventor of the kaleidoscope and an improved version of the stereoscope applied to photography.[5] He called it the "lenticular stereoscope", which was the first portable, 3D viewing device.[6] He also invented the binocular camera,[7][8] two types of polarimeters,[9] the polyzonal lens and the lighthouse illuminator.[10]

A prominent figure in the popularization of science,[11] he is considered one of the founders of the British Association,[12][13] of which he would be elected President in 1849. In addition, he was the editor of the 18-volume Edinburgh Encyclopædia.

At the age of 12, David was sent to the University of Edinburgh (graduating MA in 1800), being intended for the clergy. He was licensed a minister of the Church of Scotland, but only preached from the pulpit on one occasion. He had already shown a strong inclination for natural science, and this had been fostered by his intimacy with a "self-taught philosopher, astronomer and mathematician", as Sir Walter Scott called him, of great local fame—James Veitch of Inchbonny—a man who was particularly skilful in making telescopes.[14]

Though Brewster duly finished his theological studies and was licensed to preach, his other interests distracted him from the duties of his profession. In 1799 fellow-student Henry Brougham persuaded him to study the diffraction of light. The results of his investigations were communicated from time to time in papers to the Philosophical Transactions of London and other scientific journals. The fact that other scientists – notably Étienne-Louis Malus and Augustin Fresnel – were pursuing the same investigations contemporaneously in France does not invalidate Brewster's claim to independent discovery, even though in one or two cases the priority must be assigned to others.[14] A lesser-known classmate of his, Thomas Dick, also went on to become a popular astronomical writer.

The most important subjects of his inquiries can be enumerated under the following five headings:

In this line of investigation, the prime importance belongs to the discovery of

These discoveries were promptly recognised. As early as 1807 the degree of LL.D. was conferred upon Brewster by Marischal College, Aberdeen; in 1815 he was elected a Fellow of the Royal Society of London, and received the Copley Medal; in 1818 he received the Rumford Medal of the society; and in 1816 the French Institute awarded him one-half of the prize of three thousand francs for the two most important discoveries in physical science made in Europe during the two preceding years.[14] In 1821, he was made a foreign member of the Royal Swedish Academy of Sciences. 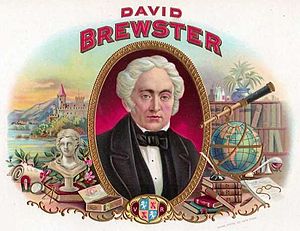 Inner picture of a cigar box from the early 1900s with a portrait of Brewster.

Among the non-scientific public, his fame spread more effectually by his invention in about 1815 of the kaleidoscope, for which there was a great demand in both the United Kingdom, France, and the United States.[14] As a reflection of this fame, Brewster portrait was later printed in some cigar boxes. Brewster chose renowned achromatic lens developer Philip Carpenter as the sole manufacturer of the kaleidoscope in 1817. Although Brewster patented the kaleidoscope in 1817 (GB 4136),[15][16] a copy of the prototype was shown to London opticians and copied before the patent was granted. As a consequence, the kaleidoscope became produced in large numbers, but yielded no direct financial benefits to Brewster.[17][18][19] It proved to be a massive success with two hundred thousand kaleidoscopes sold in London and Paris in just three months.[20] 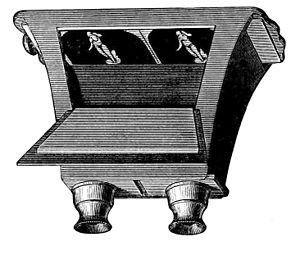 An instrument of more significance, the stereoscope, which – though of much later date (1849) – along with the kaleidoscope did more than anything else to popularise his name, was not as has often been asserted the invention of Brewster. Sir Charles Wheatstone discovered its principle and applied it as early as 1838 to the construction of a cumbersome but effective instrument, in which the binocular pictures were made to combine by means of mirrors.[14] A dogged rival of Wheatstone's, Brewster was unwilling to credit him with the invention, however, and proposed that the true author of the stereoscope was a Mr. Elliot, a "Teacher of Mathematics" from Edinburgh, who, according to Brewster, had conceived of the principles as early as 1823 and had constructed a lensless and mirrorless prototype in 1839, through which one could view drawn landscape transparencies, since photography had yet to be invented.[21] Brewster's personal contribution was the suggestion to use prisms for uniting the dissimilar pictures; and accordingly the lenticular stereoscope may fairly be said to be his invention.

A much more valuable and practical result of Brewster's optical researches was the improvement of the British lighthouse system. Although Fresnel, who had also the satisfaction of being the first to put it into operation, perfected the dioptric apparatus independently, Brewster was active earlier in the field than Fresnel, describing the dioptric apparatus in 1812. Brewster pressed its adoption on those in authority at least as early as 1820, two years before Fresnel suggested it, and it was finally introduced into lighthouses mainly through Brewster's persistent efforts.[14]

Although Brewster's own discoveries were important, they were not his only service to science. He began writing in 1799 as a regular contributor to the Edinburgh Magazine, of which he acted as editor at the age of twenty. In 1807, he undertook the editorship of the newly projected Edinburgh Encyclopædia, of which the first part appeared in 1808, and the last not until 1830. The work was strongest in the scientific department, and many of its most valuable articles were from the pen of the editor. At a later period he was one of the leading contributors to the Encyclopædia Britannica (seventh and eighth editions) writing, among others, the articles on electricity, hydrodynamics, magnetism, microscope, optics, stereoscope, and voltaic electricity. He was elected a member of the American Antiquarian Society in 1816.[22]

In 1819 Brewster undertook further editorial work by establishing, in conjunction with Robert Jameson (1774–1854), the Edinburgh Philosophical Journal, which took the place of the Edinburgh Magazine. The first ten volumes (1819–1824) were published under the joint editorship of Brewster and Jameson, the remaining four volumes (1825–1826) being edited by Jameson alone. After parting company with Jameson, Brewster started the Edinburgh Journal of Science in 1824, 16 volumes of which appeared under his editorship during the years 1824–1832, with very many articles from his own pen.

He contributed around three hundred papers[3] to the transactions of various learned societies, and few of his contemporaries wrote as much for the various reviews. In the North British Review alone, seventy-five articles of his appeared. A list of his larger separate works will be found below. Special mention, however, must be made of the most important of them all: his biography of Sir Isaac Newton. In 1831 he published a short popular account of the philosopher's life in Murray's Family Library; but it was not until 1855 that he was able to issue the much fuller Memoirs of the Life, Writings and Discoveries of Sir Isaac Newton, a work which embodied the results of more than 20 years' investigation of original manuscripts and other available sources.[23][24]

Brewster's position as editor brought him into frequent contact with the most eminent scientific men, and he was naturally among the first to recognise the benefit that would accrue from regular communication among those in the field of science. In a review of Charles Babbage's book Decline of Science in England in John Murray's Quarterly Review, he suggested the creation of "an association of our nobility, clergy, gentry and philosophers".[25] This was taken up by various Declinarians and found speedy realisation in the British Association for the Advancement of Science. Its first meeting was held at York in 1831; and Brewster, along with Babbage and Sir John Herschel, had the chief part in shaping its constitution.[23]

In the same year in which the British Association held its first meeting, Brewster received the honour of knighthood and the decoration of the Royal Guelphic Order. In 1838, he was appointed principal of the united colleges of St Salvator and St Leonard, University of St Andrews. In 1849, he acted as president of the British Association and was elected one of the eight foreign associates of the Institute of France in succession to J. J. Berzelius; and ten years later, he accepted the office of principal of the University of Edinburgh, the duties of which he discharged until within a few months of his death.[23] In 1855, the government of France made him an Officier de la Légion d'honneur.

He was a close friend of William Henry Fox Talbot, inventor of the calotype process, who sent Brewster early examples of his work. It was Brewster who suggested Talbot only patent his process in England, initiating the development of early photography in Scotland and eventually allowing for the formation of the first photographic society in the world, the Edinburgh Calotype Club, in 1843.[3] Brewster was a prominent member of the club until its dissolution sometime in the mid-1850s; however, his interest in photography continued, and he was elected the first President of the Photographic Society of Scotland when it was founded in 1856.[26]

Of a high-strung and nervous temperament, Brewster was somewhat irritable in matters of controversy; but he was repeatedly subjected to serious provocation. He was a man of highly honourable and fervently religious character. In estimating his place among scientific discoverers, the chief thing to be borne in mind is that his genius was not characteristically mathematical. His method was empirical, and the laws that he established were generally the result of repeated experiment. To the ultimate explanation of the phenomena with which he dealt he contributed nothing, and it is noteworthy although he did not maintain to the end of his life the corpuscular theory he never explicitly adopted the wave theory of light. Few would dispute the verdict of James David Forbes, an editor of the eighth edition of the Encyclopædia Britannica: "His scientific glory is different in kind from that of Young and Fresnel; but the discoverer of the law of polarization of biaxial crystals, of optical mineralogy, and of double refraction by compression, will always occupy a foremost rank in the intellectual history of the age." In addition to the various works of Brewster already mentioned, the following may be added: Notes and Introduction to Carlyle's translation of Legendre's Elements of Geometry (1824); Treatise on Optics (1831); Letters on Natural Magic, addressed to Sir Walter Scott (1832) The Martyrs of Science, or the Lives of Galileo, Tycho Brahe, and Kepler (1841); More Worlds than One (1854).[23]

In his Treatise he demonstrated that vegetal colors were related with the absorption spectra[27] and he described for the first time the red fluorescence of chlorophyll.

Brewster's Christian beliefs stirred him to respond against the idea of the transmutation of species and the theory of evolution. In 1845 he wrote a highly critical review of the evolutionist work Vestiges of the Natural History of Creation, in the North British Review.[28] which he considered to be an insult to Christian revelation and a dangerous example of materialism.

In 1862, he again responded to Darwin's On the Origin of Species and published the article The Facts and Fancies of Mr Darwin in Good Words. He stated that Darwin's book combined both "interesting facts and idle fancies" which made up a "dangerous and degrading speculation". He accepted adaptive changes, but he strongly opposed Darwin's statement about the primordial form, which he considered an offensive idea to "both the naturalist and the Christian."[29] 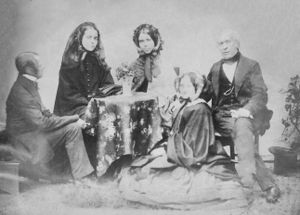 Brewster married a second time in Nice, on 26 (or 27) March 1857, to Jane Kirk Purnell (b. 1827), the second daughter of Thomas Purnell of Scarborough.[35] Brewster died in 1868, and was buried at Melrose Abbey, next to his first wife and second son.[3][36] The physics building at Heriot-Watt University is named in his honour.

Brewster appears as a minor antagonist in the 2015 video game Assassin's Creed Syndicate as a scientist working for the Templars. He is assassinated by one of the protagonists, Evie Frye