From Infogalactic: the planetary knowledge core
(Redirected from David Davis (senator))
Jump to: navigation, search
For other people of the same name, see David Davis (disambiguation).

David Davis (March 9, 1815 – June 26, 1886) was a United States Senator from Illinois and associate justice of the United States Supreme Court. He also served as Abraham Lincoln's campaign manager at the 1860 Republican National Convention, along with Ward Hill Lamon, one of Lincoln's former law partners who served as the President's primary bodyguard during the American Civil War. Davis and Lamon, along with another Lincoln associate, Leonard Swett, helped engineer Lincoln's nomination.

Educated at Kenyon College and Yale University, Davis settled in Bloomington, Illinois in the 1830s, where he practiced law. He served in the Illinois legislature and as a delegate to the state constitutional convention before becoming a state Judge in 1848. Lincoln practiced law in his court. After Lincoln won the presidency, Davis was appointed to the United States Supreme Court, where he served until being elected to the Senate in 1877. Known for his independence, he was elected President pro tempore of the United States Senate, placing him in the line of presidential succession, and was the last such to be a member neither of the Democratic or Republican parties.

He was born to a wealthy family in Cecil County, Maryland, where he attended public school. After graduating from Kenyon College in Gambier, Ohio, in 1832, he went on to study law in Massachusetts[1] and at Yale University. Upon his graduation from Yale in 1835, Davis moved to Bloomington, Illinois, to practice law. He married Sarah Woodruff Walker of Lenox, Massachusetts, in 1838. Two of their children, George and Sallie, survived to adulthood. Davis also served as a member of the Illinois House of Representatives in 1845 and a delegate to the Illinois constitutional convention in McLean County, 1847. From 1848 to 1862, Davis presided over the court of the Illinois Eighth Circuit, the same circuit where attorney Abraham Lincoln was practicing.

Davis was a delegate to the 1860 Republican National Convention in Chicago, serving as Lincoln's campaign manager during the 1860 presidential election. After President Lincoln's assassination, Judge Davis was an administrator of his estate.[1] 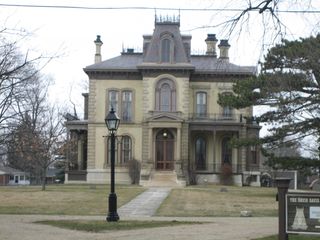 On October 17, 1862, Davis received a recess appointment from President Lincoln to a seat on the U.S. Supreme Court vacated by the resignation of John Archibald Campbell, who had resigned in protest of Lincoln's perceived intent to go to war with seceding Southern states. Formally nominated on December 1, 1862, Davis was confirmed by the United States Senate on December 8, 1862, and received his commission the same day.

On the Court, Davis became famous for writing one of the most profound decisions in the Supreme Court history, Ex Parte Milligan (1866). In that decision, the court set aside the death sentence imposed during the Civil War by a military commission upon a civilian, Lambdin P. Milligan. Milligan had been found guilty of inciting insurrection. The Supreme Court held that since the civil courts were operative, the trial of a civilian by a military tribunal was unconstitutional. The opinion denounced arbitrary military power, effectively becoming one of the bulwarks of held notions of American civil liberty.

In 1870 he held, with the minority of the Supreme Court, that the acts of Congress making government notes a legal tender in payment of debts were constitutional.[1] He is the only judge of the Supreme Court with no recorded affiliation to any religious sect.[2]

After refusing calls to become Chief Justice, Davis, a registered independent, was nominated for President by the Labor Reform Convention in February 1872 on a platform that declared, among other things, in favor of a national currency "based on the faith and resources of the nation," and interchangeable with 3.65% bonds of the government, and demanded the establishment of an eight-hour law throughout the country, and the payment of the national debt "without mortgaging the property of the people to enrich capitalists." In answer to the letter informing him of the nomination, Judge Davis said: "Be pleased to thank the convention for the unexpected honor which they have conferred upon me. The chief magistracy of the republic should neither be sought nor declined by any American citizen."[1]

He withdrew from the presidential contest when he failed to receive the Liberal Republican Party nomination, which went to editor Horace Greeley. Greeley died after the popular election and before the return of the electoral vote. One of Greeley's electoral votes went to Davis. 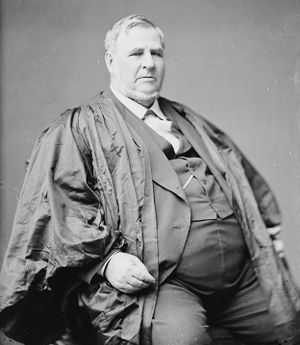 In 1877, Davis narrowly avoided the opportunity to be the only person to ever single-handedly select the President of the United States. In the disputed Presidential election of 1876 between the Republican Rutherford Hayes and the Democrat Samuel Tilden, Congress created a special Electoral Commission to decide to whom to award a total of 20 electoral votes which were disputed from the states of Florida, Louisiana, South Carolina and Oregon. The Commission was to be composed of 15 members: five drawn from the U.S. House of Representatives, five from the U.S. Senate, and five from the U.S. Supreme Court. The majority party in each legislative chamber would get three seats on the Commission, and the minority party would get two. Both parties agreed to this arrangement because it was understood that the Commission would have seven Republicans, seven Democrats, and Davis, who was arguably the most trusted independent in the nation.

According to one historian, "No one, perhaps not even Davis himself, knew which presidential candidate he preferred."[3] Just as the Electoral Commission Bill was passing Congress, the legislature of Illinois elected Davis to the Senate. Democrats in the Illinois Legislature believed that they had purchased Davis's support by voting for him. However, they had made a miscalculation; instead of staying on the Supreme Court so that he could serve on the Commission, he promptly resigned as a Justice, in order to take his Senate seat. Because of this, Davis was unable to assume the spot, always intended for him, as one of the Supreme Court's members of the Commission. His replacement on the Commission was Joseph Philo Bradley, a Republican, thus the Commission ended up with an 8–7 Republican majority. Each of the 20 disputed electoral votes was eventually awarded to Hayes, the Republican, by that same 8-7 majority; Hayes won the election, 185 electoral votes to 184. Had Davis been on the Commission, his would have been the deciding vote, and Tilden would have been elected president if Davis and the commission had awarded him even one electoral vote.

Davis served only a single term as U.S. Senator from Illinois.

In 1881, Davis's renowned independence was again called upon. Upon the assassination of President James A. Garfield, Vice President Chester Arthur succeeded to the office of president. Per the terms of the Presidential Succession Act of 1792, which was still in effect, the President pro tempore of the Senate would be next in line for the presidency, should it again become vacant at any time in the 3½ years remaining in Garfield's term. As the Senate was evenly divided between the parties, this posed the risk of deadlock. However, the presence of Davis provided an answer; despite being only a freshman Senator, the Senate elected Davis as President Pro Tempore.[4] Davis was not a candidate for re-election. At the end of his term in 1883, he retired to his home in Bloomington.[1]

Upon his death in 1886, he was interred at Evergreen Cemetery in Bloomington, Illinois. His grave can be found in section G, lot 659.

His home in that city, the David Davis Mansion, is a state historic site. At his death, he was the largest landowner in Illinois, and his estate was worth between four and five million dollars[citation needed].