From Infogalactic: the planetary knowledge core
Jump to: navigation, search
This article is about the botanist. For other people named David Douglas, see David Douglas (disambiguation). 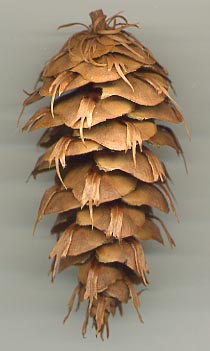 Coast Douglas-fir cone, from a tree grown from seed collected by David Douglas in 1826

David Douglas (25 June 1799 – 12 July 1834) was a Scottish botanist, best known as the namesake of the Douglas fir. He worked as a gardener, and explored the Scottish Highlands, North America, and Hawaii, where he died.[1]

Douglas was born in Scone, Perthshire, the second son of John Douglas, a stonemason, and Jean Drummond. He attended Kinnoull School and upon leaving found work as an apprentice to William Beattie, head gardener at Scone Palace, the seat of the Earl of Mansfield. He spent seven years in this position, completing his apprenticeship, and then spent a winter at a college in Perth to learn more of the scientific and mathematical aspects of plant culture. After a further spell of working in Fife (during which time he had access to a library of botanical and zoological books) he moved to the Botanical Gardens of Glasgow University and attended botany lectures. William Jackson Hooker, who was Garden Director and Professor of Botany, was greatly impressed with him and took him on an expedition to the Highlands before recommending him to the Royal Horticultural Society of London.[2]

Douglas made three separate trips from England to North America. His first trip, to eastern North America, began on 3 June 1823, with a return in the late autumn of 1823. The second was to the Pacific Northwest, from July 1824 returning October 1827. His third and final trip started in England in October 1829. On that last journey he went first to the Columbia River, then to San Francisco, then in August 1832, to Hawaii. October 1832, found him back in the Columbia River region. A year later, in October 1833, he returned to Hawaii arriving on 2 January 1834.[3]

The second expedition starting in 1824 was his most successful. The Royal Horticultural Society[4] sent him back on a plant-hunting expedition in the Pacific Northwest that ranks among the great botanical explorations. In the Spring of 1826, David Douglas was compelled to climb a peak (Mount Brown, of the mythical pair Hooker and Brown) near Athabasca Pass to take in the view. In so doing, he became the first mountaineer in North America.[citation needed] He introduced the Douglas-fir into cultivation in 1827. Other notable introductions include Sitka Spruce, Sugar Pine, Western White Pine, Ponderosa Pine, Lodgepole Pine, Monterey Pine, Grand Fir, Noble Fir and several other conifers that transformed the British landscape and timber industry, as well as numerous garden shrubs and herbs such as the Flowering currant, Salal, Lupin, Penstemon and California poppy. His success was well beyond expectations; in one of his letters to Hooker, he wrote "you will begin to think I manufacture pines at my pleasure". Altogether he introduced about 240 species of plants to Britain.

He first briefly visited Hawaii in 1830 on his way to the Pacific Northwest. He returned again in December 1833 intending to spend three months of winter there. He was only the second European to reach the summit of the Mauna Loa volcano.[5] He died under mysterious circumstances while climbing Mauna Kea in Hawaiʻi at the age of 35 in 1834.[6] He apparently fell into a pit trap and was possibly crushed by a bull that fell into the same trap. He was last seen at the hut of Englishman Edward "Ned" Gurney, a bullock hunter and escaped convict. Gurney was also suspected in Douglas's death, as Douglas was said to have been carrying more money than Gurney subsequently delivered with the body. However, most investigators have concluded that Gurney's account was true.[7] Douglas was buried in an unmarked common grave near Mission House in Honolulu, Hawaii.[8] Later, in 1856, a marker was erected on an outside wall at Kawaiahaʻo Church (Kawaiahao Church Cemetery). A monument was built at the spot where Douglas died by members of the Hilo Burns Society including David McHattie Forbes. It is called Ka lua kauka ("Doctor's Pit" in the Hawaiian language), off Mānā Road on the Island of Hawaiʻi Lua error in Module:Coordinates at line 668: callParserFunction: function "#coordinates" was not found..[9] A small stand of Douglas-fir trees has been planted there.[10]

Although the common name Douglas-fir refers to him, the tree's scientific name, Pseudotsuga menziesii, honours a rival botanist, Archibald Menzies. Several Hawaiian plants were named after him in earlier taxonomies, such as Pandanus tectorius known in Hawaiian as hala, sometimes given the name Pandanus douglasii.[10] Over eighty species of plant and animal have douglasii in their scientific names, in his honour. He introduced several hundred plants to Great Britain and hence to Europe.[11] There is a memorial to David Douglas in his birthplace of Scone. David Douglas High School and the David Douglas School District in Portland, Oregon are named after him. Remnants of a greenhouse built by David Douglas can be seen in Wood Street Village, Surrey.

In Vancouver, Washington, he is remembered via David Douglas Park which was used during World War II as interim housing for the Kaiser Shipyard workers living in little silver trailers, giving the area the brief nickname during the era of "Trailer Terrace Park."[12]

The standard author abbreviation Douglas is used to indicate this individual as the author when citing a botanical name.[13]

A documentary film, Finding David Douglas, has recently been completed and tells the story of his life and achievements, to great critical acclaim.