Lieutenant General Sir David Henderson KCB, KCVO, DSO, LLD (11 August 1862 – 17 August 1921) was the senior leader of British military aviation during World War I, having previously established himself as the leading authority on tactical intelligence in the British Army. He served as the commander of the Royal Flying Corps in the field during the first year of World War I and was instrumental in establishing the Royal Air Force as an independent service.[1] After the war Henderson was the first Director-General of the League of Red Cross Societies.

David Henderson was born in Glasgow on 11 August 1862 into a ship-owning family. His father, also called David Henderson, was a joint owner of the Clydeside ship builders David and William Henderson and Company.[2]

Henderson entered the University of Glasgow in 1877 at the age of just fifteen. While there, he read engineering and in his fourth year (1880–1881) he studied civil engineering and mechanics as well as office and field work in engineering. For reasons now unknown, he left the university to train for a military career at the Royal Military College, Sandhurst, instead of graduating from Glasgow.[2]

In 1895, Henderson married Henrietta Caroline Dundas, later known as Dame Henrietta Henderson after being appointed as a Dame of Grace of the Order of St. John of Jerusalem (D.G.St.J.) and in 1919 was further appointed a Dame Commander of the Order of the British Empire (DBE), the equivalent of a knighthood for a man.[3] The couple had three children[citation needed] including Ian Henry David Henderson, who also joined the Royal Flying Corps,[4] but Ian Henderson predeceased his parents, dying in a flying accident in June 1918.[5] Dame Henrietta Henderson lived until 14 April 1959. 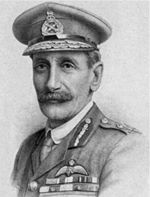 Following officer training at the Royal Military College Sandhurst, Henderson was commissioned into the British Army on 25 August 1882, joining the Argyll and Sutherland Highlanders. He was a member of the Nile Expedition of 1898 and was wounded at the Siege of Ladysmith during the Boer War.[6] In February 1901 Kitchener appointed Henderson his Director of Military Intelligence, a post he held until the end of the Boer War.[7] His subsequent works, Field Intelligence: Its Principles and Practice (1904) and The Art of Reconnaissance (1907), did much to establish his reputation as the Army's authority on tactical intelligence.[1]

In 1911, at the age of 49, Henderson learned to fly, making him the world’s oldest pilot at that time.[1] He formed part of the technical sub-committee of the Air Committee which helped to decide the organisation of the Royal Flying Corps, which was formed on 13 April 1912.[8][9] In 1913 the control of military aviation was separated from the responsibilities of the Master-General of the Ordnance.[10] A new Department of Military Aeronautics was established and Henderson was appointed the first Director[11] and, with the outbreak of World War I, he took up command of the Royal Flying Corps in the field.[12] On 22 November 1914, Henderson was appointed General Officer Commanding the 1st Infantry Division and his Chief of Staff Frederick Sykes took up command in his stead. However, Henderson did not spend long commanding the 1st Infantry Division. The decision to post Henderson and replace him with Sykes was not to Lord Kitchener's liking and he ordered a reversal of the appointments. On 20 December 1914, Henderson resumed command of the Royal Flying Corps in the Field and Sykes was once again his Chief of Staff.[13][14]

In 1915 Henderson returned to London to resume his London-based duties as Director-General of Military Aeronautics,[6] which Sefton Brancker had been performing in his absence. This meant that when, in 1917, General Jan Smuts was writing his review of the British Air Services, Henderson was well placed to assist. While seconded to General Smuts, Henderson wrote much of what came to be called the Smuts Report.[1][6] It has been argued that he had a better claim to the informal title "father of the Royal Air Force" than Sir Hugh Trenchard.[1] Trenchard himself believed that Henderson deserved the accolade.[15]

In January 1918, Henderson was made a member of the Air Council,[6] serving as its vice-president. However, having not been appointed as the RAF's Chief of the Air Staff, Henderson resigned from the Air Council in April, citing his desire to escape the atmosphere of intrigue at the Air Ministry.[16]

Following his departure from the Air Council, Henderson returned to France where he served until October 1918. After the armistice, Henderson served as a military counsellor during the Paris Peace Conference[16] until the signing of the Versailles Treaty in June 1919. Henderson then became Director-General of the League of Red Cross Societies in Geneva, where he died in 1921, aged 59.[6]

Henderson was awarded the Distinguished Service Order in 1902 for his work during the Second Boer War.

In April 1914 he was created Knight Commander of the Bath (KCB).[12] In March 1918, Henderson accepted the honorary position of Colonel of the Highland Light Infantry.[17]