David L. Goldfein (born 1959) is a General in the United States Air Force who currently serves as the Air Force Vice Chief of Staff. He was previously Director of the Joint Staff a position within the Joint Chiefs of Staff who assists the Chairman of the Joint Chiefs of Staff.[1] On April 26, 2016, it was announced that Goldfein was nominated to succeed Gen Mark A. Welsh as the 21st Chief of Staff of the United States Air Force.[2] 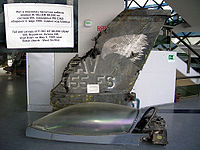 Tail and canopy of then Lt Col Goldfein's F-16CG shot down during the Operation Allied Force at the Museum of Aviation, Belgrade

David L. Goldfein father's family was Jewish. Goldfein received his commission from the U.S. Air Force Academy in 1983. He has commanded the U.S. Air Forces Central Command; 49th Fighter Wing, Holloman AFB, N.M.; 52nd Fighter Wing, Spangdahlem Air Base, Germany; 366th Operations Group, Mountain Home AFB, Idaho; and the 555th Fighter Squadron, Aviano AB, Italy. General Goldfein is a graduate of the U.S. Air Force Weapons School. He deployed to Southwest Asia for operations Desert Shield and Desert Storm, and to the Vicenza Combined Air Operations Center for Operation Deliberate Force. As commander of the Triple Nickel, flying an F-16 fighter he led his squadron in Operation Allied Force and was shot down by the 3rd battery of the 250th Air Defense Missile Brigade of the Yugoslav Air Force and Air Defense on the 2 May 1999. over western Serbia but was rescued by NATO helicopters before he could be located and captured. His previous assignments include, Deputy Director of Programs, Office of the Deputy Chief of Staff for Strategic Plans and Programs, Headquarters U.S. Air Force, Washington, D.C., and Director of Operations, Headquarters Air Combat Command, Joint Base Langley-Eustis, Va.[3] The general is a command pilot with more than 4,100 flying hours in the T-37, T-38, F-16C/D, F-117A and MQ-9.