From Infogalactic: the planetary knowledge core
Jump to: navigation, search
For other people with similar names, see David Lindsay. 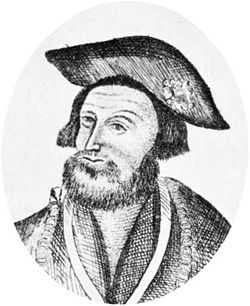 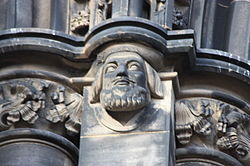 Sir David Lindsay as depicted on the Scott Monument 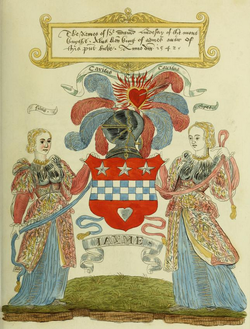 Sir David's coat of arms, as illustrated in the Lindsay of the Mount Roll

Sir David Lyndsay of the Mount (c. 1490 – c. 1555), (alias Lindsay), was a Scottish herald who gained the highest heraldic office of Lyon King of Arms. He remains a well regarded poet whose works reflect the spirit of the Renaissance, specifically as a makar.

He was the son of David Lyndsay, second of the Mount (Fife), and of Garmylton, (Haddingtonshire) (d.circa. 1503). His place of birth and early education are unknown, but it is known that he attended the University of St Andrews, on the books of which appears an entry "Da Lindesay" for the session 1508–1509. He was engaged as a courtier in the Royal Household; first as an equerry, then as an usher (assistant to a head-tutor) to the future King James V of Scotland.[1] In 1522 he married Janet Douglas, a court seamstress. His first heraldic appointment was as Snowdon Herald and in 1529 he was appointed Lord Lyon King of Arms, and knighted. He was engaged in diplomatic business (twice on embassies abroad—to the Netherlands and France), and was, in virtue of his heraldic office, a general master of ceremonies. He signed the only surviving letter from this time, "Dauid Lyndsay." His handwriting shows no trace of the italic forms used by those Scots who had finished their education abroad.[2]

After the death of James V, in 1542, Lyndsay continued to sit in Parliament of Scotland as commissioner for Cupar, Fife; and in 1548 he was member of a mission to Denmark which obtained certain privileges for Scottish merchants. There is reason to believe that he died in or about 1555.

In 1542 he produced a Scottish roll of arms known today as the Lindsay of the Mount Roll. It contains 400 Scottish coats of arms, some of which were added later in the 16th century, and forms the basis of the official Scots heraldic registry in use today. A facsimile comprising accurate redrawing of his own drawings was published in Edinburgh in 1878.[3]

Most of Lyndsay's literary work, by which he secured great reputation in his own day and by which he still lives, was written during the period of prosperity at court. In this respect he is different from Gavin Douglas, who abandoned literature to become a politician. The difference is due partly to the fact that Lyndsay's muse was more occasional and satirical, and that the time was suitable to the exercise of his special gifts. It is more difficult to explain how he enjoyed such unparalleled freedom of speech. He chastised all classes, from his royal master to the most simple. There is no evidence that he abjured Catholicism; yet his leading purpose was the exposure of its errors and abuses. His aid was readily accepted by the reforming party, and by their use of his work he shared with their leaders throughout many generations a reputation which is almost exclusively political and ecclesiastical.

Lyndsay's longer poems represent, with reasonable completeness, the range of Lyndsay's literary talent. No single poem can give him a chief place, though here and there, especially in the last, he gives hints of the highest competence. Yet the corporate effect of these pieces is to secure for him the allowance of more than mere intellectual vigour and common sense. There is in his craftsmanship, in his readiness to apply the traditional methods to contemporary requirements, something of that accomplishment which makes even the second-rate man of letters interesting.

Lyndsay, the Makar, is not behind his fellow-poets in acknowledgment to Geoffrey Chaucer. As piously as they, he reproduces the master's forms; but in him the sentiment and outlook have suffered change. His nearest approach to Chaucer is in The Historie and Testament of Squyer Meldrum, which recalls the sketch of the "young squire"; but the reminiscence is verbal rather than spiritual. Elsewhere his memory serves him less happily, as when he describes the array of the lamented Queen Magdalene in the words which Chaucer had applied to the eyes of his wanton Friar. So too, in the Dreme, the allegorical tradition survives only in the form. "Remembrance" conducts the poet over the old-world itinerary, but only to lead him to speculation on Scotland's woes and to an "Exhortatioun to the Kingis Grace" to bring relief. The tenor is well expressed in the motto from the Vulgate--"Prophetias nolite spernere. Omnia autem probate: quod bonum est tenete."

This didactic habit is freely exercised in the long poem Ane Dialog betwixt Experience and ane Courteor (sometimes called the Monarchie), a universal history of the medieval type, in which the falls of princes by corruption supply an object lesson to the unreformed church of his day. Ane Pleasant Satyre of the Thrie Estaitis is more direct in its attack on ecclesiastical abuse; and its dramatic form permits more lively treatment. This piece is of great historical interest, being the only extant example of a complete Scottish morality. It is in respect of literary quality Lyndsay's best work, and in dramatic construction and delineation of character it holds a high place in this genre. The farcical interludes (in places too coarse for modern taste) supply many touches of genuine comedy; and throughout the play there are passages, as in the speeches of Veritie in the First Part and of Dame Chastitie in the "Interlude of the Sowtar and the Taylor," in which word and line are happily conceived.

The Testament of the Papyngo (parrot), drawn in the familiar medieval manner, is another tract for the time, full of admonition to court and clergy. Of his shorter pieces, The Complaynt and Publict Confessions of the Kingis Auld Hound, callit Bagsche, directit to Bawtie, the Kingis best belovit Dog, and his companyconis, and the Answer to the Kingis Flyting have a like pulpit resonance. The former is interesting as a forerunnel of Burns's device in the "Twa Dogs." The Deploratioun of the Death of Queen Magdalene is in the extravagant style of commemoration illustrated in Dunbar's Elegy on the Lord Aubigny. The Justing betwix James Watsoun and Jhone Barbour is a contribution to the popular taste for boisterous fun, in spirit, if not in form, akin to the Christis Kirk on the Grene series; and indirectly, with Dunbar's Turnarnent and Of ane Blak-Moir, a burlesque of the courtly tourney. Lyndsay approaches Dunbar in his satire The Supplicatioun in contemptioun of syde taillis ("wide" trains of the ladies), which recalls the older poet's realistic lines on the filthy condition of the city streets. In Lyndsay's Descriptioun of Pedder Coffeis (pedlars) we have an early example of the studies in vulgar life which are so plentiful in later Scottish literature. In Kitteis Confessioun he returns, but in more sprightly mood, to his attack on the church.

In Lyndsay we have the first literary expression in Scotland of the Renaissance. His interest lies on the theological side of the revival; he is in no sense a humanist, and he is indifferent to the artistic claims of the movement. Still he appeals to the principle which is fundamental to all. He demands first-hand impression. He feels that men must get their lesson direct, not from intermediaries who understand the originals no more "than they do the ravyng of the rukis." Hence his persistent plea for the vernacular, nowhere more directly put than in the Dialog, in the "Exclamatioun to the Redar, toucheyng the wrytting of the vulgare and maternall language." Though he is concerned only in the theological and ecclesiastical application of this, he undoubtedly stimulated the use of the vernacular in a Scotland which in all literary matters beyond the concern of the irresponsible poet still used the lingua franca of Europe.

A professional work prepared by Lyndsay in the Lyon Office, entitled the Register of Scottish Arms (now preserved in manuscript in the Advocates' Library), was printed in 1821 and reprinted in 1878. It remains the most authoritative document on Scottish heraldry. Lyndsay's brother David Lyndsay, Rothesay Herald, offered to show the Armorial to the English diplomat Thomas Randolph in October 1561, "wherein are all the arms of all the noblemen and barons both new and old that are in Scotland."[4]

As Snowdon Herald, Lindsay was sent to the Emperor Charles V at the end of June 1531. He was to conclude their Treaty of Perpetual Peace for a duration of 100 years. This would succeed a treaty made 100 years previously. Other business included the long-standing issue of Robert Barton of Over Barnton's ship the Black Bark, seized by Spanish pirates off England in 1519. In his Latin letters to Charles V, James V refers to Lindsay as "chief herald" or "first of our order."[5] Lindsay stayed 7 weeks at court with the Emperor and Queen of Hungary at Brussels.[6]

David Lindsay was set to go to France as a herald accompanying Thomas Erskine of Haltoun and the Bishop of Ross in January 1532. This Scottish embassy was delayed till March 1532.[7] The ambassadors were to contract with Francis I of France the marriage of James V to Madeleine of Valois.[8]

Lindsay as Lion King of Arms accompanied Lord Erskine with Robert Hart, Rothesay Herald, to Windsor Castle, where they acted as proxy for the installation of James V as a Knight of the Order of the Garter. After travelling to meet Henry VIII at Thornbury Castle, they returned to London, where a servant of Thomas Cromwell gave Lindsay £20.[9]

David Lindsay conducted the visit of the English ambassador Ralph Sadler at Holyroodhouse in February 1540 with his assistant Rothesay Herald. They met Sadler, and brought him to James V at the Chapel Royal in the Palace then returned him to his lodgings and dined with him. Later, Lindsay arranged Sadler's meeting with Margaret Tudor, and brought him to meet her again in Chapel on the following Sunday.[10]

After the death of James V, David Lindsay was sent by Regent Arran to England to return the late King's collar, garter, and statutes of the Order of the Garter to Stephen Gardiner Bishop of Winchester the prelate of the Order. Henry VIII wrote to Arran that Lindsay had fulfilled his office "right discreetly."[11]

David Lindsay of the Mount appears as the sympathetic major character in Nigel Tranter's well-researched James V trilogy: The Riven Realm (1984), James V, By the Grace of God (1985), and Rough Wooing (1987).

Lindsay's description of the Tower of Babel in his Dialog ("The shadow of that hyddeous strength [the Tower of Babel] sax myle and more it is of length") is used as the motto of the novel "That Hideous Strength" by C. S. Lewis, and the book's name is also derived from it.

Sir David appears as a character in Sir Walter Scott's epic poem Marmion. He is depicted amongst the sixteen Scottish writers and poets on the lower section of the Scott Monument on Princes Street in Edinburgh. He is shown on the left side of the southern face.