David John Sainsbury, Baron Sainsbury of Turville, FRS, HonFREng[1] (born 24 October 1940), is a British businessperson and politician. From 1992 to 1997, he served as the Chair of Sainsbury's, the supermarket chain established by his great-grandfather John James Sainsbury in 1869.

He was made a life peer in 1997, and currently sits in the House of Lords as a member of the Labour Party. He served in the government as the Minister for Science and Innovation from 1998 and 2006. 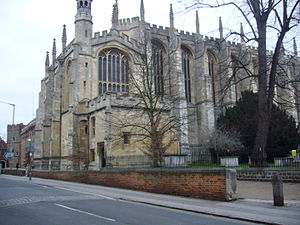 He is the son of Sir Robert Sainsbury and Lisa van den Bergh. His elder sister was Elizabeth (married name Clark, 19 July 1938 – 14 August 1977) and his younger sisters are Celia and Annabel. He is the nephew of Lord Sainsbury. His cousins are the Conservative peer Lord Sainsbury of Preston Candover, Simon Sainsbury, and former Tory MP Sir Tim Sainsbury. His great-grandparents, John James Sainsbury and Mary Ann Staples, established a grocer's at 173 Drury Lane in 1869 which became the British supermarket chain Sainsbury's.

He attended Eton College before going on to the University of Cambridge, where he earned a degree in History and Psychology at King's College. He then completed an MBA at Columbia Business School in the United States.

He and his wife, Susan Carol "Susie" (née Reid) a former teacher, have three daughters.

He lives in the Manor of Turville in Turville, Buckinghamshire. The Manor once belonged to the abbey at St Albans, but was seized by the Crown in the Dissolution of the Monasteries in 1547. The manor house has since been rebuilt as Turville Park, a fine stately home in the village.

He was also appointed as a Honorary Fellow[1] of the Royal Academy of Engineering[1] in 1994.

He was made a life peer as Baron Sainsbury of Turville in the County of Buckinghamshire in 1997, following the Labour Party's election victory.

David Sainsbury joined the family firm, then known as 'J. Sainsbury Ltd.', in 1963, working in the personnel department. He became a director in 1966. He was Financial Controller from 1971 to 1973, just before the Company's flotation.

In 1996, Sainsbury's announced its first drop in profits in 22 years, and the first of three profits warnings during David's chairpersonship was issued. Although there were senior management changes, which included David relinquishing the Chief Executive's role to Dino Adriano and becoming Non-Executive chairperson, there were no new directors or outsiders appointed to the senior management team. Profits fell the next year, but rose in 1998. At this point, David Sainsbury, who had wanted to step down at the end of 1997, made a surprise announcement of his retirement as chairperson to pursue his long-held ambition to have a career in politics, after "32 enjoyable and fulfilling years" working for Sainsbury's. Sainsbury's share price increased on the day of this announcement.

On his retirement as chairperson, to avoid any conflict of interest, David Sainsbury placed his then 23% stake in Sainsbury's into a "blind" trust, to be administered by lawyer Judith Portrait. When David Sainsbury announced his intention to give away £1 billion to charity in 2005, his 23% stake was sold down, eventually to 12.9% by early 2007. His beneficial holding became just 7.75% when he re-gained control of his shares in February 2007 following his decision to step down as Science and Innovation Minister in November 2006. During the private equity takeover bid in the first half of 2007, David indicated he was willing to let the Sainsbury's board open its books for due diligence if someone offered him a price of 600 pence per share or more.

David Sainsbury retains a sizeable shareholding in his family's supermarket chain (around 5.85%).[4] To further his philanthropy interests, he placed 92million of his shares (representing 5.28% of the Company's share capital), into his investment vehicle, Innotech Advisers Ltd (which donates all its dividends to charity), meaning his beneficial stake is just 0.57% (lower than JD's 1.6% beneficial interest). The Sainsbury family as a whole control approximately 15% of Sainsbury's. In the Sunday Times Rich List 2008 his family fortune was estimated at £1.3 billion.

David Sainsbury joined the Labour Party in the 1960s, but was one of the 100 signatories of the 'Limehouse Declaration' in an advertisement in The Guardian on 5 February 1981;[5] he went on to be a member of the Social Democratic Party formed by the authors of the Declaration. After the 1983 election Sainsbury prompted the party to give more priority to recruiting members and finding a firm financial base; he was by far the biggest donor to the party, and a trustee,[6] giving about £750,000 between 1981 and 1987. Sainsbury's donations were typically earmarked to specific projects rather than general day-to-day operations.[7]

Along with David Owen, Sainsbury opposed merging the SDP with the Liberal Party after the 1987 election, and provided office space for Owen to help him re-establish a separate political party, the "continuing" SDP, which was created in 1988.[8]

That party was wound up in 1990, and Sainsbury changed allegiance back to the Labour Party, rejoining them in 1996. A year later, he entered the House of Lords as a Labour peer, being created Baron Sainsbury of Turville, of Turville in the County of Buckinghamshire on 3 October 1997.[9]

Between 1996, the year he rejoined Labour, and 2006, when he stood down as a government minister, Sainsbury donated £16 million to the Labour Party, usually in batches of £1 million or £2 million each year.[10] He donated a further £2 million on 7 September 2007, stating that he was impressed by Gordon Brown's leadership and believed "that Labour is the only party which is committed to delivering both social justice and economic prosperity".[11] He gave another £500,000 on 15 December 2008,[12] making a total of £18.5 million.

It was reported in April 2006 that Sainsbury, "faced a possible probe into an alleged breach of the ministerial code after admitting he had failed to disclose a £2 million loan he had made to the Labour Party – despite publicly stating that he had." He subsequently apologised for "unintentionally" misleading the public, blaming a mix-up between the £2 million loan and a £2 million donation he had made earlier.[13][14][15]

In July 2006, he became the first government minister to be questioned by police in the "Cash for Peerages" inquiry.[13][16] On 10 November 2006, he resigned as Science Minister, stating that he wanted to focus on business and charity work.[17] He categorically denied that his resignation had anything to do with the "Cash for Peerages" affair, stating that he was "not directly involved in whether peerages were offered for cash",[18] although this was contradicted by subsequent press reports attributed to "Labour insiders" which suggested that his resignation was indeed a direct consequence of the affair.[19]

From July 1998 to November 2006, he held the post of Parliamentary Under-Secretary of State at the Department of Trade and Industry, as the Minister for Science and Innovation in the House of Lords, a government position for which he accepted no salary.

He was the Blair government's third-longest-serving minister after Tony Blair himself, and Gordon Brown.[13] Because of his importance to the Labour Party as a donor, contemporary press reports described him as "unsackable."[20] He has argued that there are "far too many reshuffles", and that there were considerable benefits to his remaining in post for so long.[21]

David Sainsbury has also been associated with the Institute for Public Policy Research and Progress. Between 2001 to 2011 he provided £2 million of funding for Progress.[22] In 2009, he created the Institute for Government with £15 million of funding through the Gatsby Charitable Foundation to help government and opposition politicians to prepare for political transitions and government.[20][23] Sainsbury donated £390,000 to Progress and the Movement for Change between December 2011 and April 2013, while he was not on a UK electoral register, which is contrary to electoral law, leading to Progress and the Movement for Change being fined by the Electoral Commission.[24][25]

Sainsbury has been funding the "Remain" side of the Brexit campaign.[26]

He set up the Sainsbury Management Fellowship scheme in 1987 to develop UK engineers into leaders in industry. He was also made an honorary fellow of the Royal Society in 2008.[31]

Sainsbury has donated £127 million of the Gatsby Charitable Foundation's money to Cambridge University in the last decade: he gave £45 million to Cambridge University's Botanical Gardens in 2005.[32] In 2011, Cambridge's Sainsbury Laboratory opened, paid for by an £82 million donation from the Gatsby Foundation made in 2008. It was hailed by the Financial Times as "one of the biggest donations ever made to a British university...surpassed only by a 2000 gift to the university by the Bill and Melinda Gates Foundation."[33]

In 2013, together with his wife Susie, joined the Giving Pledge, the group started by Warren Buffett and Bill and Melinda Gates, pledging to donate half his fortune to charitable trusts during his lifetime.[34]

Chancellor of the University of Cambridge

In 2011, Lord Sainsbury was formally proposed by the Nominations Board of Cambridge University to succeed the Duke of Edinburgh as Chancellor of the University of Cambridge.[35] If his election had not been contested by 17 June, he would have assumed office on 1 July.[36] However, his nomination became the first in 163 years to be contested by another candidate when, on 29 May, local shopkeeper Abdul Arain, standing against Sainsbury in protest at a planning application for a Sainsbury's Local branch in Cambridge's Mill Road district, triggered a contest that would have to wait until an October ballot.[37] Four days later, a group of Cambridge University alumni successfully drafted actor Brian Blessed as an alternative candidate.[38][39] On 20 June, socialist barrister Michael Mansfield became the third candidate to oppose Sainsbury. An election took place on 14 and 15 October 2011[40] which Lord Sainsbury won with 52% of the votes (2893 votes out of 5558) on a 2.5% turnout and he was confirmed to the position on 16 October 2011.[2]