Shimonovitch (later David Shimoni) was born in Babruysk in Belarus (then part of the Russian Empire) to Nissim Shimonovitch and Malka Fridland[1] Although he lived in Ottoman Palestine for a year in 1909, he did not immigrate to British-administered Palestine until 1920. 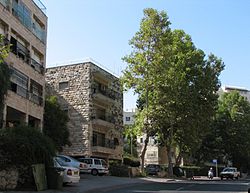