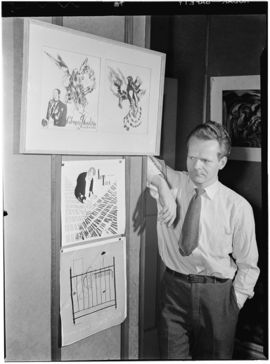 David Stone Martin was born June 13, 1913, in Chicago and attended evening classes at the School of the Art Institute of Chicago. He was greatly influenced by the line art of Ben Shahn. By 1950, Martin had produced more than 100 covers for Mercury, Asch, Disc and Dial record albums. Many assignments came from his longtime friend, record producer Norman Granz.[3]

For various companies, Martin eventually created illustrations for more than 400 record albums. Many of these were simply line art combined with a single color. Martin's favorite tool was a crowquill pen which enabled him to do delicate line work. CBS-TV art director William Golden gave Martin many print ad assignments during the 1950s, and Martin soon expanded into illustration for Seventeen, The Saturday Evening Post and other slick magazines of the 1950s and 1960s.[3] His studio was located in Roosevelt, New Jersey, near his home there.[3][4]

Martin is represented in the Museum of Modern Art, the Metropolitan Museum of Art, the Art Institute of Chicago and the Smithsonian Institution.

Martin was the husband of muralist Thelma Martin, who painted the post office mural for the facility in Sweetwater, Tennessee.[5] He was the father of graphic artist Stefan Martin (born 1936) and painter Tony Martin.[2] He died March 6, 1992, in New London, Connecticut,[2] where he had lived in his old age.