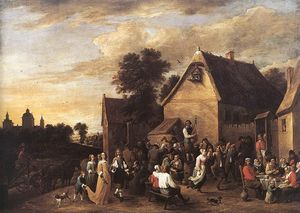 Through his father, he was indirectly influenced by Elsheimer and by Rubens. The influence of Adriaen Brouwer can be traced to the outset of his career. There is no evidence, however, that either Rubens or Brouwer interfered in any way with Teniers's education, and Smith (Catalogue Raisonné) may be correct in supposing that the admiration which Brouwer's pictures at one time excited alone suggested to the younger artist his imitation of them. The only trace of personal relations having existed between Teniers and Rubens is the fact that the ward of the latter, Anne Breughel, the daughter of Jan (Velvet) Breughel, married Teniers in 1637.

Admitted as a "master" in the Guild of St Luke in 1632, Teniers had even before this made the public acquainted with his works. The Berlin Museum possesses a group of ladies and gentlemen dated 1630. No special signature positively distinguishes these first productions from those of his father, and we do not think it correct to admit with some writers that he first painted religious subjects. Dr. Bode, in a study of Brouwer and his works, expresses the opinion that Teniers's earliest pictures are those found under the signature "Tenier." "Tenier" is a Flemish version of a thoroughly Walloon name, "Taisnier" which the painter's grandfather, a mercer, brought with him when he came from Ath in 1558; and Dr. Bode's supposition is greatly strengthened by the circumstance that not only David the elder but his brother Abraham and his four sons were all inscribed as "Tenier" in the ledgers of the Antwerp Guild of St Luke. 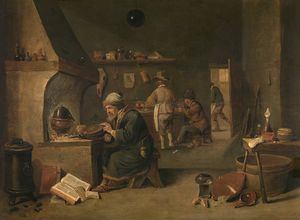 Some really first-rate works—the Prodigal Son and a group of Topers in the Munich Gallery, as well as a party of gentlemen and ladies at dinner, termed the Five Senses, in the Brussels Museum—with the above signature are evidence of the mastery attained by the artist when he may be supposed to have been scarcely twenty. His touch is of the rarest delicacy, his colour at once gay and harmonious. Waagen and Smith agree that the works painted from 1645 to 1650 testify most highly to the master's abilities; there is no doubt that a considerable number of earlier productions would have been sufficient to immortalize his name.

He was little over thirty when the Antwerp guild of St. George enabled him to paint the picture which ultimately found its way to the Hermitage in St. Petersburg the Meeting of the Civic Guards. Correct to the minutest detail, yet striking in effect, the scene, under the rays of glorious sunshine, displays an astonishing amount of acquired knowledge and natural good taste. This painting leads us to mention another work of the same year (1643), now in the National Gallery, London, The Village Fete (or La fete aux chaudrons) (No. 952), an equally beautiful repetition of which, dated 1646, belongs to the duke of Bedford. 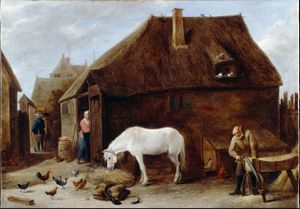 Teniers, David the younger - The Chaff-cutter 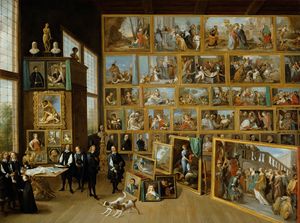 Teniers was chosen by the common council of Antwerp to preside over the Guild of Saint Luke in 1644. The Archduke Leopold Wilhelm, who had assumed the government of the Spanish Netherlands employed Teniers as a painter and as keeper of his growing collection of pictures.[1] With the title of "ayuda de camara," Teniers moved to Brussels shortly after 1647. Immense sums were spent buying paintings for the archduke. A number of valuable works of Italian masters, now in the Kunsthistorisches Museum, came from Leopold Wilhelm's gallery after having belonged to Charles I and the Duke of Buckingham. 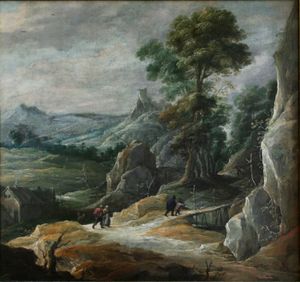 De Bie (1661) states that Teniers visited London, collecting pictures for the Duke of Fuensaldana, then acting as Leopold Wilhelm's lieutenant in the Netherlands. Paintings in Madrid, Munich, Vienna and Brussels have enabled art critics to form an opinion on the imperial residence at the time of Leopold Wilhelm, who is represented as conducted by Teniers and admiring some recent acquisition. No picture in the gallery is omitted, every one being inscribed with a number and the name of its author, so that the ensemble of these paintings might serve as an illustrated inventory of the collection. Still more interesting is a canvas, now in the Munich Gallery, where we see Teniers at work in a room of the palace, with an old peasant as a model and several gentlemen looking on.

When Leopold Wilhelm returned to Vienna, Teniers' appointment ended. The picture gallery of Leopold Wilhelm's was moved to Austria, and a Flemish priest, who was also a first-rate flower painter, Jan Anton van der Baren, became keeper of the archducal gallery in Vienna. Teniers nevertheless remained in high favor with the new governor-general, Don Juan of Austria, a natural son of Philip IV of Spain. The prince was his pupil, and de Bie tells us he painted the likeness of the painter's son.

David Teniers the Younger was honoured as one of the greatest painters in Europe. Shortly after the death of his wife in 1656, he married Isabella de Fren, daughter of the secretary of the council of Brabant, and strove his utmost to prove his right to armorial bearings. 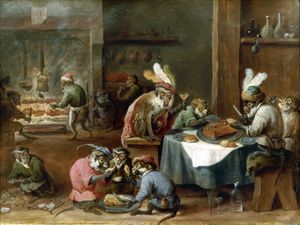 In a petition to the king he reminded him that the honour of knighthood had been bestowed upon Rubens and van Dyck. The king at last declared his readiness to grant the request, but on the express condition that Teniers should give up selling his pictures. The condition was not complied with; but it may perhaps account for his interest in founding an academy in Antwerp strictly limited to painters and sculptors. (The venerable Guild of St. Luke made no difference between art and handicraft: carvers, gilders, bookbinders, stood on an even footing with painters and sculptors: which separation was not made until 1773.) There were great rejoicings in Antwerp when, on 26 January 1663, Teniers came from Brussels with the royal charter creating the Antwerp Royal Academy of Fine Arts, the existence of which was due entirely to his personal initiative.

Teniers died in Brussels on 25 April 1690. The date is often wrongly given as 1694 or 1695. A picture in the Munich Gallery (No. 906), dated 1680, represents him as an alchemist, oppressed with a burden of age beyond his years. From this date, more is documented of his doings as a picture-dealer than as a painter, which most probably gave birth to the legend of his having given himself out as deceased in order to get higher prices for his works. David, his eldest son, a painter of talent and reputation, had died in 1685. One of this third Teniers's pictures—"St Dominic Kneeling before the Blessed Virgin," dated 1666—is still to be found in the church at Perck. As well as his father, he contributed many patterns to the celebrated Brussels tapestry looms. 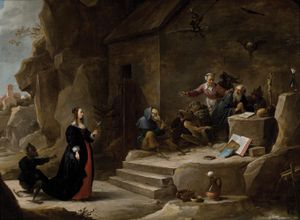 Two thousand paintings are thought to have been painted by Teniers.[1] Smith's Catalogue Raisonné gives descriptions of over 900 paintings accepted as original productions of Teniers. Few artists ever worked with greater ease, and some of his smaller pictures, landscapes with figures, have been termed "afternoons", not from their subjects, but from the time spent in producing them. The museums in Madrid, St Petersburg, Vienna, Munich, Dresden, Paris, London and Brussels have more than 200 pictures by Teniers. In the United Kingdom, 150 may be found in private hands. There are nearly 300 paintings in public collections in the United Kingdom.[2] Although the spirit of many of these works is as a whole marvellous, their conscientiousness is regarded as questionable. From 1654 onwards some detect a lack of earnestness and of the calm and concentrated study of nature which alone prevent expression from degenerating into grimace in situations like those generally depicted by Teniers. 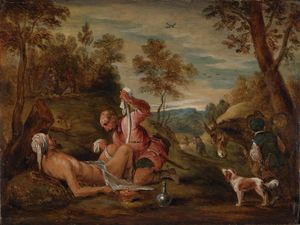 Studio of (after Francesco Bassano) - The Good Samaritan, 1650-1656, Courtauld Institute

His education, and still more his real and assumed position in society, to a great degree account for this. Brouwer knew more of taverns; Ostade was more thoroughly at home in cottages and humble dwellings; Teniers, throughout, triumphs in broad daylight, and, though many of his interiors may be justly termed masterpieces, they seldom equal his open-air scenes, where he has, without constraint, given full play to the bright resources of his luminous palette. In this respect, he often suggests comparisons with Watteau. But his subjects taken from the Gospels or sacred legend are absurd. An admirable picture in the Louvre shows Peter Denying his Master next to a table where soldiers are smoking and having a game at cards. A similar example is the Deliverance of St Peter from Prison of which two versions, curiously altered, are in the Dresden Gallery and the Wallace Collection. He likes going back to subjects illustrated two centuries before by Hieronymus Bosch—the Temptation of St Anthony, the Rich Man in Hell, incantations and witches for the simple purpose of assembling the most comic apparitions. His villagers drink, play bowls, dance and sing; they seldom quarrel or fight, and, if they do, seem to be shamming. Teniers' works have a technical freshness, a straightforwardness in means and intent, which make the study of them most delightful; as Sir Joshua Reynolds says, they are worthy of the closest attention of any painter who desires to excel in the mechanical knowledge of his art. 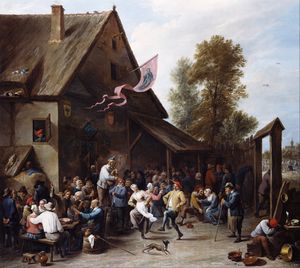 More than 500 plates were made from his pictures; and, if it be true that Louis XIV judged his "baboons" (magots) unworthy of a place in the royal collections, they found admirable engravers in France—Le Bas and his scholars—and passionate admirers. The duke of Bedford's specimen was sold for 18,030 livres (£1860) in 1768. The Prodigal Son, now in the Louvre, fetched 30,000 livres (£3095) in 1776. Smith's highest estimates have long since been greatly exceeded. The Archers in St Petersburg he gives as worth £2000. The Belgian government gave £5000 in 1867 for the Village Pastoral of 1652, which is now in the Brussels Museum; and a picture of the Prodigal Son, scarcely 16 by 28 inches, fetched £5280 in 1876. 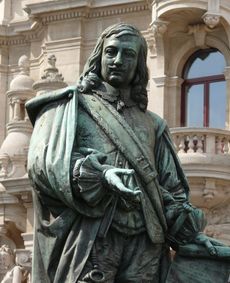 Bronze statue of David Teniers the Younger in Antwerp.

Although van Tilborgh, who was a scholar of Teniers in Brussels, followed his style, and later painters often excelled in figure-painting on a small scale, Teniers cannot be said to have formed a school. Properly speaking, he is the last representative of the great Flemish traditions of the 17th century.