From Infogalactic: the planetary knowledge core
Jump to: navigation, search
Not to be confused with Davidson, North Carolina.

Davidson County is a county located in the U.S. state of North Carolina. As of the 2010 census, the population was 162,878.[1] Its county seat is Lexington,[2] and its largest city is Thomasville.

Parts of Davidson County are in the Yadkin Valley wine region.

The original North Carolina county of this name was created in 1786 what was then the far western portion of North Carolina, with its county seat at Nashville and a territory covering most of what is now Middle Tennessee. When Tennessee was established as a separate state in 1796, this county became Davidson County, Tennessee.

The current North Carolina county was formed in 1822 from Rowan County. It was named after Brigadier General William Lee Davidson, an American Revolutionary War general killed at the Battle of Cowan's Ford on the Catawba River in 1781.[3][4]

In 1911, a new county called Piedmont County was proposed, with High Point as its county seat, to be created from Guilford, Davidson and Randolph Counties. Many people appeared at the Guilford County courthouse to oppose the plan, vowing to go to the state legislature to protest. The state legislature voted down the plan in February 1911.[5][6]

Davidson County is located entirely within the Piedmont region of central North Carolina. The Piedmont consists of gently rolling terrain frequently broken by hills or shallow valleys formed by rivers and streams. An exception to this terrain are the Uwharrie Mountains in the county's western and southwestern sections. The Uwharries are the oldest mountain range in North America,[citation needed] and at one time they rose to nearly 20,000 feet (6,100 m) above sea level. However, time has worn them down to little more than high hills; yet due to the relative flatness of the surrounding countryside they still rise from 250 to 500 feet (150 m) above their base. The highest point in the Uwharries - and the highest point in Davidson County - is High Rock Mountain in the county's southwestern corner. It has an elevation of 1,119 feet (341 m) above sea level.

Davidson County is a member of the regional Piedmont Triad Council of Governments.

In 1965, the institution was chartered as Davidson County Community College. The Associate in Arts and Associate in Science degrees were added to the existing Associate in Applied Science degree, Diploma, and Certificate programs. University transfer courses were added in 1966. In 1997, the College participated in the Comprehensive Articulation Agreement (CAA) that allows college transfer students to move easily to the 16 UNC schools, as well as many independent college and universities. Presently the Davidson Campus has grown to 11 buildings and two emergency services training facilities on approximately 97 acres (390,000 m2). 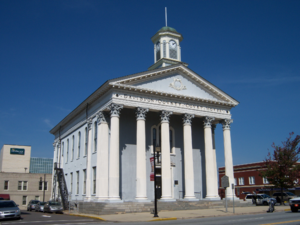 One of the county's most famous attractions is the yearly Lexington Barbecue Festival, held in the city of Lexington during the month of October, bringing in over 100,000 visitors from all over the southeastern U.S. There is also a yearly Davidson County Agriculture Fair held in September. Thomasville hosts an annual "Everybody's Day Festival",[14] the longest running festival in the state. The "Southeastern Old Threshers Reunion"[15] is held every year at the Denton Farmpark.

In addition, there are many year-long attractions in Davidson County. Some of which include Historic Uptown Lexington, which consists of the Davidson County Historical Museum located in the old courthouse and Boone's Cave Park (where legend says an adolescent Daniel Boone hid from Indians). Other attractions include Denton Farm Park, Walter Johnson Camp and Conference Center, and the North Carolina Vietnam Veterans Memorial. The Big Chair in Thomasville is also a major landmark.

File:Lexington Barbecue Festival - more pigs.jpgPigs in the City in an art initiative held each summer in Lexington, and attracts tens of thousands of visitors.

In 2005, Davidson County Community College and the City of Thomasville formed a partnership for the creation of the Thomasville Artisan Center. This art studio allowed the College to reinvigorate its Associate in Fine Arts Degree and offer both university transfer classes as well as adult community interest classes in painting, drawing, and sculpting. The Artisan Center is part of the College's Thomasville Education Center complex which is part of the College's outreach to the community. The College has a second campus in Davie County in the city of Mocksville, as well as the Uptown Lexington Education Center, located within a few blocks of the Arts Center of Davidson County and the historic Court House.

Finally, Davidson County is known for its oversized chair, "The Big Chair." This chair is located in central Thomasville and is a symbol of Davidson County's furniture industry.

High Rock Lake is the northernmost of the Uwharrie Lakes and the second largest lake in North Carolina behind Lake Norman. Its water surface covers 15,180 acres (61.4 km2) and there are 365 miles (587 km) of shoreline. It begins at the confluence of the Yadkin River and the South Yadkin River. It has been the host of the Bassmaster Classic in 1994, 1995, 1997 and 2007 [16] and is the site of frequent other local angling competitions. Lexington is just north of the Abbotts Creek section of the lake.