The Davis Cup is the premier international team event in men's tennis. It is run by the International Tennis Federation (ITF) and is contested annually between teams from competing countries in a knock-out format. It is described by the organisers as the "World Cup of Tennis", and the winners are referred to as the World Champion team.[1] The competition began in 1900 as a challenge between Great Britain and the United States. By 2015, 126 nations entered teams into the competition.[2] The most successful countries over the history of the tournament are the United States (winning 32 titles and finishing as runners-up 29 times) and Australia (winning 28 titles, including four with New Zealand as Australasia, and finishing as runners-up 19 times). The current champions are Spain, who beat Canada to win their sixth title in 2019.

The women's equivalent of the Davis Cup is the Fed Cup. Australia, the Czech Republic, and the United States are the only countries to have held both Davis Cup and Fed Cup titles in the same year. The Hopman Cup, a third competition for mixed teams, carries less prestige, but is a popular curtain raiser to the tennis season. 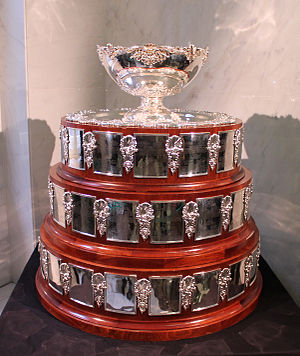 The tournament was conceived in 1899 by four members of the Harvard University tennis team who wished to challenge the British to a tennis competition. Once their respective lawn tennis associations agreed, one of the four Harvard players, Dwight F. Davis, designed a tournament format and ordered an appropriate sterling silver trophy from Shreve, Crump & Low, purchasing it from his own funds for about $1,000.[3] They in turn commissioned a classically-styled design from William B. Durgin's of Concord, New Hampshire, crafted by the Englishman Rowland Rhodes.[4] Davis went on to become a prominent politician in the United States in the 1920s, serving as US Secretary of War from 1925 to 1929 and as Governor-General of the Philippines from 1929 to 1932.

The first match, between the United States and Britain (competing as the "British Isles"), was held at the Longwood Cricket Club in Boston, Massachusetts in 1900. The American team, of which Dwight Davis was a part, surprised the British by winning the first three matches. The following year the two countries did not compete, but the US won the match in 1902 and Britain won the following four matches. By 1905 the tournament expanded to include Belgium, Austria, France, and Australasia, a combined team from Australia and New Zealand that competed together until 1914.

The tournament was initially titled the International Lawn Tennis Challenge although it soon became known as the Davis Cup, after Dwight Davis' trophy. The Davis Cup competition was initially played as a challenge cup. All teams competed against one another for the right to face the previous year's champion in the final round.

Beginning in 1923, the world's teams were split into two zones: the "America Zone" and the "Europe Zone". The winners of the two zones met in the Inter-Zonal Zone ("INZ") to decide which national team would challenge the defending champion for the cup. In 1955 a third zone, the "Eastern Zone", was added. Because there were three zones, the winner of one of the three zones received a bye in the first round of the INZ challenger rounds. In 1966, the "Europe Zone" was split into two zones, "Europe Zone A" and "Europe Zone B", so the winners of the four zones competed in the INZ challenger rounds.

Beginning in 1972, the format was changed to a knockout tournament, so that the defending champion was required to compete in all rounds, and the Davis Cup was awarded to the tournament champion.

Up until 1973, the Davis Cup had only ever been won by the United States, Great Britain/British Isles, France and Australia/Australasia. Their domination was eventually broken in 1974 when South Africa and India made the final; however the final was scratched and South Africa awarded the cup after India refused to travel to South Africa in protest at South Africa's apartheid policies. The following year saw the first actual final between two "outsider" nations, when Sweden beat Czechoslovakia 3–2, and since then many other countries have gone on to capture the trophy.

In 1981, the tiered system of competition in use today was created, in which the 16 best national teams compete in the World Group and all other national teams compete in one of four groups in one of three regional zones. In 1989, the tiebreak was introduced into Davis Cup competition. It is now used in all sets except for the fifth, which remains an advantage set, though it too will become a tiebreak from 2016.[5] 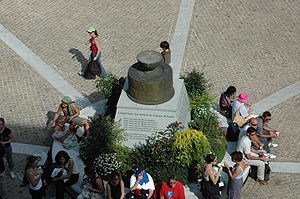 Monument to the Davis Cup at Stade Roland Garros in Paris, France

The 16 best national teams are assigned to the World Group and compete annually for the Davis Cup. Nations which are not in the World Group compete in one of three regional zones (Americas, Asia/Oceania, and Europe/Africa). The competition is spread over four weekends during the year. Each elimination round between competing nations is held in one of the countries, and is played as the best of five matches (4 singles, 1 doubles). The ITF determines the host countries for all possible matchups before each year's tournament.

Each of the three regional zones is divided into four groups. Groups I and II play elimination rounds, with the losing teams facing relegation to the next-lower group. The teams in Groups III and those in Group IV play a round-robin tournament with promotion and relegation.

As in other cup competitions tie is used in the Davis Cup to mean an elimination round. In the Davis Cup, the word rubber means an individual match.

Each tie consists of 5 rubbers, which are played in 3 days (usually on Friday, Saturday, and Sunday). The winner of the tie is the nation which wins 3 or more of the 5 rubbers in the tie. On the first day, the first 2 rubbers are singles, which are generally played by each nation's 2 best available singles players. On the second day, the doubles rubber is played. On the third day, the final 2 rubbers are typically reverse singles, in which the first-day contestants usually play again, but they swap opponents from the first day's singles rubbers. However, in certain circumstances, the team captain may replace one or two of the players who played the singles on Friday by other players who were nominated for the tie. For example, if the tie has already been decided in favour of one of the teams, it is common for younger or lower-ranked team members to play the remaining dead rubbers in order for them to gain Davis Cup experience.

Ties are played at a venue chosen by one of the competing countries. The right of choice is given on an alternating basis. Therefore, countries play in the country where the last tie between the teams was not held. In case the two countries haven't met since 1970, lots are drawn to determine the host country.[8]

Venues in the World Group must comply with certain minimum standards, including a minimum seating capacity as follows:[9]

Prior to each tie, the captain of each nation nominates a squad of four players and decides who will compete in the tie. On the day before play starts, the order of play for the first day is drawn at random. In the past, teams could substitute final day singles players only in case of injury or illness, verified by a doctor, but current rules permit the captain to designate any player to play the last two singles rubbers, provided that no first day matchup is repeated. There is no restriction on which of the playing team members may play the doubles rubber: the two singles players, two other players (usually doubles specialists) or a combination.

Each rubber is normally played in a best-of-5 set. The first four sets use a tiebreak if necessary, but the fifth set usually has no tiebreaker, so play continues until one side wins by two games (e.g. 10–8). However, if a team has clinched the tie before all 5 rubbers have been completed, the remaining rubbers may be shortened to the best-of-3-sets, with a tie breaker if necessary to decide all three sets.

In Group III and Group IV competition, each tie consists only of 3 rubbers, which include 2 singles and one doubles rubber, which is played in a single day. The rubbers are in the best-of-3-set format, with a tie breaker if necessary to decide all three sets.

For more details on this topic, see List of Davis Cup champions.

1Players must now be aged 14 and over

Complete rankings As of 30 November 2015[update]

Only World Group and World Group Play-Off matches and only live matches earn points. Dead rubbers earn no points. If a player does not compete in the singles of one or more rounds he will receive points from the previous round when playing singles at the next tie. This last rule also applies for playing in doubles matches.[11]

2 For the first round only, any player who competes in a live rubber, without a win, receives 10 ranking points for participation.[11]

3 Team bonus awarded to a singles player who wins 7 live matches in a calendar year and his team wins the competition.[11]

4 Performance bonus awarded to a singles player who wins 8 live matches in a calendar year. In this case, no Team bonus is awarded.[11]

5 Team bonus awarded to an unchanged doubles team who wins 4 matches in a calendar year and his team wins the competition.[11]دط