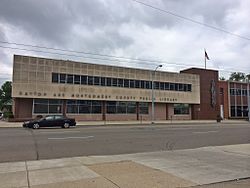 Library service in Dayton began in 1805 with the Social Library Society of Dayton. The Society was also the first library to be incorporated in Ohio. The Society was dissolved in 1821 and books were sold at auction.

In November 2012, Dayton, Ohio area voters passed Issue 70, a $187 million bond issue covering building and renovation, with a vote of over 60% support. The project will allow for a completely renovated main branch of the library, expansion and/or remodeling and renovation on a number of existing branches, entirely new facilities for certain locations, and the consolidation of certain underperforming and outdated facilities with larger, modernized branches.[5] The Dayton Daily News reported on this levy and said, “the plan would change libraries from “books and bricks” into community centers designed to provide traditional library services, as well as the latest technology.” [6] The renovated and new facilities are all expected to be completed by year-end 2017.[7] On March 20, 2013, it was announced that a re-examination of the plan had determined that in certain cases new libraries could be built rather than expanding or renovating certain branches, without increasing the cost of the plan. As such, it was determined that the Brookville, Miamisburg, New Lebanon, Northmont and Trotwood Branches would all be moved to new buildings, rather than being renovated/expanded.[8]

Under the ten-year bond issue, Issue 70 (also known as "Libraries for Tomorrow"), passed by voters, the branch structure will be modified as follows:[12]

At one time, borrower's cards used at Dayton Metro Library use the nearly 40-year-old Codabar barcode format, with the symbol 'A' preceding and following the account number in the barcode proper. As of at least the early 2000s, all cards issued begin with the sequence 10060 or 10061, followed by 8 digits.

As of 2012, the Dayton Metro Library's catalogue operates under the Polaris system, but had previously used Horizon from 2003 onwards, which was no longer offering software updates. Prior to this, it had used DRA from 1985.[14]