Dayton Metropolitan Area (also known as Greater Dayton), as defined by the United States Census Bureau, is an area consisting of three counties in the Miami Valley region of Ohio and is anchored by the city of Dayton. As of 2000 it is the fourth largest metropolitan area in Ohio and the 61st largest Metropolitan Area by Population in the United States. As of the 2010 census, the MSA had a population of 841,502.[1] The larger Dayton–Springfield–Greenville-Sidney Combined Statistical Area includes Greene County, Darke County, Montgomery County, Miami County, Clark County, Ohio|Clark County, Shelby County, and Champaign County and had a population of 1,080,044 according to the 2010 Census.[1]

According to an article in the Cincinnati Enquirer, as Greater Cincinnati grows northward through Butler County, its outer suburbs are expected to expand and begin to overlap the Greater Dayton area.[2] Such a concept has already received the nickname of "Daytonnati."[3] The two metropolitan areas were expected to be combined after tabulation of the 2010 Census, but this did not occur.

The Dayton Metropolitan area is part of the Great Lakes Megalopolis containing an estimated 54 million people. 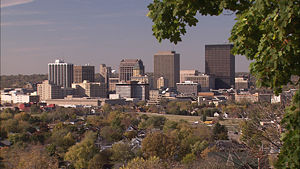 City of Dayton skyline from Woodland Cemetery and Arboretum

Places with fewer than 1,000 inhabitants 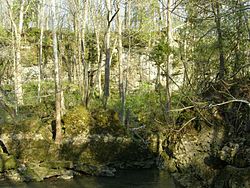 The Dayton Metropolitan Statistical Area formerly included Clark County and Preble County. In 2005, Clark County containing Springfield, Ohio separated from the Dayton MSA to create their own MSA named Springfield Metropolitan Statistical Area. As a result of new Census criteria to delineate metropolitan areas, Preble County was eliminated from the MSA in 2010 as it no longer qualified for inclusion. A significant drop in population for the Dayton MSA is noted in the 2010 census because of these changes.[8]

The Greater Dayton region is home to a number of higher education facilities, including:

Greater Dayton is served by international, regional and county airports, including: