From Infogalactic: the planetary knowledge core
(Redirected from Dazhbog)
Jump to: navigation, search

Dažbog (Proto-Slavic: *dadjьbogъ,[1] Croatian or Serbian: Dabog, Daždbog, Dajbog; Bulgarian: Даждбог, Polish: Dadźbóg, Russian: Даж(д)ьбог, Ukrainian: Дажбог), alternatively Dazhbog, Dajbog, Dazhdbog, or Dadzbóg, was one of the major gods of Slavic mythology, most likely a solar deity and possibly a cultural hero. He is one of several authentic Slavic gods, mentioned by a number of medieval manuscripts, and one of the few Slavic gods for which evidence of worship can be found in all Slavic nations.

Dažbog (or Dažboh) is mentioned in the Primary Chronicle, a history of early Kievan Rus' as one of seven gods whose statues Prince Vladimir the Great erected in front of his palace in Kiev in 980, when he came to the throne. The name is also mentioned in the Hypatian Codex, as well as in the medieval Russian epic The Tale of Igor's Campaign.

Morphologically this word is an old compound, that is particularly interesting because it retains the old meaning of the Proto-Slavic *bogъ "earthly wealth/well-being; fortune", with a semantic shift to "dispenser of wealth/fortune" and finally "god".[2] Due to the absence of convincing cognates in other Indo-European languages, Proto-Slavic *bogъ is often considered to be an Iranian borrowing, being related to Indo-Iranian words such as Old Persian baga and Sanskrit bhaga, or at least being semantically influenced by them; in both Slavic and Indo-Iranian cognate forms mean both "deity" and "wealth, share".[3] Thus, translated literally, Dažbog would be "dispenser of fortune". Similar formations such as Belobog and Chernobog furthermore prove an existence of Iranian dualism in Proto-Slavic mythology.[2]

The most interesting passage about Dažbog comes from the Hypatian Codex, a 15th-century compilation of several much older documents from the Ipatiev Monastery in Russia. The complete passage, reconstructed from several manuscripts, translates as follows:

(Then) began his reign Feosta (Hephaestus), whom the Egyptians called Svarog… during his rule, from the heavens fell the smith’s prongs and weapons were forged for the first time; before that, (people) fought with clubs and stones. Feosta also commanded the women that they should have only a single husband… and that is why Egyptians called him Svarog… After him ruled his son, his name was the Sun, and they called him Dažbog… Sun tzar, son of Svarog, this is Dažbog.

This is in fact a Slavic translation of an original Greek manuscript of Malalin from the 6th century. In Greek text, the names of gods are Hephaestus and Helios. Apparently, the unknown Russian translator tried to re-tell the entire story (set in Egypt) by replacing the names of classical deities with those that were better known to his readers.[4] One can only hope that he indeed replaced the names of Greek gods with their fitting Slavic counterparts; however, at least one issue remains problematic: in all Slavic languages, the word for Sun, Sunce, is of neutral or feminine gender, never masculine. Also, in Baltic mythology, which is most akin to Slavic, Sun is a female deity, Saule, while the Moon is a male one. The same pattern can be observed in folklore of many Slavic nations, where the Sun is most often identified with mother or a bride, and Moon with father or husband, their children being the stars. Where exactly this leaves Dažbog as a possible male solar deity of Slavic pantheon remains questionable.

Furthermore, this passage has raised quite a few theories about family relations between Slavic gods. If we assume that indeed Svarog was believed to be Dažbog’s father, the question arises of his relation with Svarožič, another deity who is mentioned as god of fire and war in several other medieval documents describing the pagan beliefs of Slavs. Svarožič is simply a diminutive of Svarog’s name, i.e., "little Svarog", which implicates he was considered a child of Svarog. Vyacheslav Ivanov and Vladimir Toporov proposed a reconstruction of this mythical genealogy that Svarog, a deity of fire and forge similar to the Greek Hephaestus, had two sons; Dažbog, who represented the fire in sky (i.e., the Sun), and Svarožič, who symbolised the flame on earth, in the forge.[4] Henryk Łowmiański, however, theorised that Svarog was a Slavic sky god and personification of daylight sky itself, possibly a continuation of Proto-Indo-European *Dyēus Ph2ter, while Svarožič and solar Dažbog were one and the same deity, though, he concluded, two other aspects of Svarožič also existed: fiery Svarožič, as in the Sun (mentioned in Russian medieval manuscripts), and lunar Svarožič, associated with the Moon.[5] Franjo Ledic, on the other hand, simply assumed that Svarog and Dažbog are one and the same god.[6]

Many mythologists also believe Dažbog to be identical with another East Slavic deity with possible solar attributes, Hors. Osip Maximovich Bodjanskij based this theory on a following passage from Primary Chronicle:

And Vladimir began his reign in Kiev alone and erected idols on the hill outside his palace with porch: Perun of wood with a head of silver and mustache of gold and Hors Dažbog and Stribog and Simargl and Mokosh.

Note that the names Hors and Dažbog are the only two not clearly separated by the word "and" in the text. This could be an indication of a compound deity, Hors Dažbog. On this basis, Toporov assumed that Hors could be an Iranian (possibly Sarmatian or Scythian) name for this god, and Dažbog a Slavic one. Boris Rybakov compared Hors and Dažbog to Helios and Apollo, respectively, concluding that both of them were solar gods, but while Hors represented the Sun itself, Dažbog, as deus dator, rather symbolised the life-giving power of the Sun.[7] That Hors was indeed a solar deity was deduced from the following passage in the "Tale of Igor’s campaign":[8]

Vseslav the prince judged men; as prince, he ruled towns; but at night he prowled in the guise of a wolf. From Kiev, prowling, he reached, before the cocks crew, Tmutorokan. The path of great Hors, as a wolf, prowling, he crossed.

In other words, prince Vseslav reached Tmutorokan before dawn, thus crossing the path of Hors, the Sun. In the mythical view of the world, the Sun has to pass through the underworld during the night to reach the eastern horizon by the dawn. This, and the fact that prince Vseslav is transformed into a wolf during the night, while "crossing the path of Hors", draws a very interesting parallel with the Serbian Dabog, who, as stated already, was believed to be a lame "wolf shepherd" who rules over the underworld. Of particular interest is the fact that Serbian folk accounts describe him as being lame; lameness was a standing attribute of Greek Hephaestus, whom, as we have seen, the Hypatian Codex compared with Slavic smith-god Svarog, father of Dažbog. (In fact, most of Indo-European smith-gods were lame; the reason for this was most likely arsenicosis, low levels of arsenic poisoning, resulting in lameness and skin cancers. Arsenic was added to bronze to harden it and most smiths of the Bronze Age would have suffered from chronic workplace poisoning.) Serbian Dabog, being lord of underworld, was also associated with precious metals, and sometimes was said to have a silver beard. Veselin Čajkanović concluded that the cthonic character of Dabog in Serbian folklore fits very nicely with the solar Dažbog mentioned in Russian sources, pointing out that in numerous mythologies, solar deities tend to have double aspects, one benevolent, associated with the Sun during the day, and the other malevolent, associated with night, when the Sun is trapped in the underworld. In his studies of Serbian folklore, Čajkanović also concluded that many more benevolent aspects of Dažbog were passed on to popular saints in folk Christianity, in particularly onto St. Sava, Serbian national saint, who, although undoubtedly was a real historical person, in folk tales often appears in the role of culture hero.[9] The fact that in “Tale of Igor’s campaign”, the Russians and their princes are being referred to as ‘’Dažbog’s grandchildren’’, indicates that Dažbog was considered as an ancestral deity, a common role of a culture hero archetype in mythologies.

God in the modern culture 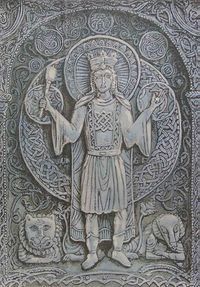 A sculpture of the god was erected in Hola Prystan (Ukraine) early in 2001. Some days later, it was broken up due to the objections of the church.[10]

April 10, 2016 Dazhdbog idol was installed by the Slavic pagans in particularly revered place in the city of Astrakhan.[11] April 12, 2016 information about the desecration of idols and destruction all the adjacent territories has become known.[12]