DeKalb County is included in the Atlanta-Sandy Springs-Roswell, GA Metropolitan Statistical Area. It contains roughly 10% of the city of Atlanta (the other 90% lies in Fulton County). It is the most diverse county in Georgia. DeKalb is primarily a suburban county, and is the second-most-affluent county with an African-American majority in the United States, behind Prince George's County, Maryland, in suburban Washington D.C. and Baltimore.

In recent years, some communities in North DeKalb have incorporated, following a trend in other suburban areas around Metro Atlanta. Dunwoody and Brookhaven are now the largest cities entirely within the county.

DeKalb County was created in 1822 from Henry, Gwinnett and Fayette counties. It was named for Baron Johann de Kalb, a German soldier who fought for the Continental Army in the American Revolutionary War.[3] The oldest existing house in the county is the 1831 Goodwin House along Peachtree Road in Brookhaven.

In 1853, Fulton County was formed from the western half of DeKalb, divided along a perfectly straight and due north/south line down the middle (along which Moreland Avenue now runs). Until this time, the growing city of Atlanta had been inside DeKalb. Atlanta grew because the city of Decatur did not want to become the railroad terminus in the 1830s, thus a spot at the Thrasherville encampment in western DeKalb was picked to become Terminus and then Marthasville, before becoming Atlanta a few years after its founding. North and southwest Fulton came from two other counties: Milton and southeast Campbell, respectively. DeKalb once extended slightly further north to the Chattahoochee River, but this strip was later given to Milton, and is now the panhandle of Sandy Springs (though residents there identify with Dunwoody).[citation needed]

During the Civil War, much of the Battle of Atlanta was fought in DeKalb.

Until the 1960s, DeKalb was a mainly agricultural county, but as the sprawl of the metropolitan Atlanta region expanded, DeKalb became increasingly urbanized. Finished in 1969, the eastern half of the Interstate 285 beltway, called "the Perimeter", ringed the northeastern and southern edges of the county, placing most of it "inside the Perimeter" along with nearly all of Atlanta. Interstate 675 and Georgia 400 were originally planned to be connected inside the Perimeter, along with the Stone Mountain Freeway (U.S. Highway 78) connecting with the Downtown Connector (a co-signment of I-75/I-85) near Moreland Avenue, destroying many neighborhoods in western DeKalb, but community opposition in the early 1970s spared them this fate of urbanization, although part of the proposed Stone Mountain Tollway later became the Freedom Parkway. Only Interstate 20 and Interstate 85 were successfully built through the county. DeKalb also became one of only two counties to approve MARTA rapid transit in the 1970s; the county now contains the east and northeast heavy rail lines.

In 1978, following a series of citizen-led studies of DeKalb's government, the delegation to the Georgia General Assembly presented to the voters a proposed constitutional amendment that permitted the General Assembly to propose a form of government for the county, which would have to be voted on by the people of DeKalb County.[5] The amendment was ratified by the voters. In 1979, a charter commission, known as the DeKalb County Government Reorganization Commission, (GRC) was created by the General Assembly.[6] The GRC was composed of 29 citizens from around the county. In November, 1979, it proposed to the DeKalb Delegation that the government be reorganized into two branches, the Board of Commissioners, which would exercise legislative authority, and the CEO, who would exercise the executive authority, assisted directly by an "executive assistant," who possessed the qualifications of a county manager.[7] In 1980, before dealing with the details of the government, the delegation presented the voters of DeKalb County with an "advisory referendum," which asked them to choose whether they would prefer to have the form of government which existed, or whether they would prefer to have the form changed to that which was proposed by the GRC.[8] At the General Primary, held on August 5, 1980, 52.5% of the voters said they wanted a change in the government, and 61.8% said they preferred the form proposed by the GRC.

In 1981, delegation adopted legislation in accordance with the wishes of the voters, and returned the question to DeKalb's voters in 1982, in accordance with Amendment 71. At the general primary, held in August, 1982, the 57.25% of DeKalb's voters approved the change in the government, despite strong opposition from the DeKalb County Commission, and its Chairman, Manuel Maloof.[9] In 2008, the Georgia General Assembly amended the act to allow the Board of the Commissioners to elect their own presiding officer and to set the agenda for meetings of the county commission. The CEO votes on matters of the commission in the case of a tie.[10]

The commission is elected from five small districts and two super-districts that each make up half of the county and overlap the smaller districts.

Under the redistricting plan in effect for the 2006, 2008, and 2010 elections for the United States House of Representatives, DeKalb is the only county in the state to be split among four congressional districts. Geographically, most of DeKalb is contained within the 4th District, while western portions of the county are in the 5th District, northern portions are in the 6th District, and the southwestern corner is in the 13th District.[citation needed]

On July 31, 2012, Brookhaven was approved in a referendum to become DeKalb County's 11th city. Incorporation officially took place on December 17, 2012, on which date municipal operations commenced. With a population of around 49,000, it is the largest city in DeKalb County. On Tuesday November 3, 2015, Tucker was approved in a referendum by an "overwhelming majority", 3 to 1 [12] to become DeKalb's 12th city. Incorporation will take place in 2016.

Unincorporated DeKalb County is policed by the DeKalb County Police Department, the DeKalb Sheriff's Office[13] which is responsible for serving criminal warrants and securing the courts and county jail, and the DeKalb Marshal's Office.which serves civil processes issued through state court, such as evictions. 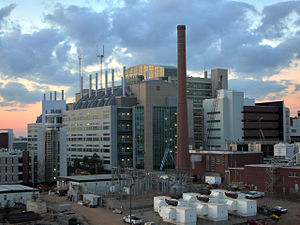 The Centers for Disease Control and Prevention is based in the Druid Hills CDP in an unincorporated area in the county.[16][17] The Federal Bureau of Investigation Atlanta Field Office is located in Chamblee.[18][19]

The Metro State Prison of the Georgia Department of Corrections was formerly located in an unincorporated area in DeKalb County.[23] Female death row inmates (UDS, "under death sentence") resided in the Metro State Prison.[24] The prison was closed in 2011.[25]

Stone Mountain lies near the eastern border of the county. Soapstone Ridge, parallel to the southern border, was heavily quarried between 1400 and 100 B.C. and objects made from the soapstone have been found as far away as the Great Lakes.

Although Fulton County is more populous, DeKalb has the highest population density of any county in the Atlanta metropolitan area.

Major employers in DeKalb County include:

On December 17, 2012, the Southern Association of Colleges and Schools announced that it had downgraded the DeKalb County Schools System's status from "on advisement" to "on probation" and warned the school system that the loss of their accreditation was "imminent."[46]

Private schools in DeKalb County include:

From its opening in 1990 until 2003,[48] the Seigakuin Atlanta International School was located on the property of Oglethorpe University in Brookhaven, an unincorporated area.[49]

Emory University is a private, coeducational, liberal arts university. It is a member of the Association of American Universities, an association of leading research universities in the US and Canada. The university consists of the following divisions: Emory College of Arts and Science, the Laney Graduate School, Candler School of Theology, Goizueta Business School, Emory University School of Law, Rollins School of Public Health, and the Nell Hodgson Woodruff School of Nursing.

Mercer University is a private, coeducational, faith-based university with a Baptist heritage. The main campus is in Macon. The Cecil B. Day Graduate and Professional Campus is in DeKalb County; it houses the College of Nursing, the College of Pharmacy and Health Sciences, and the James and Carolyn McAfee School of Theology along with programs of the Eugene W. Stetson School of Business and Economics, the School of Medicine, and the Tift College of Education.

Oglethorpe University is a private, coeducational, liberal arts school and is named after James Oglethorpe, founder of the Georgia Colony.

The DeKalb County Public Library has 22 branches throughout the county, with three additional branches planned by 2010.

U.S. Marine and Artist/Sculptor Curtis James Miller has designed a memorial that is located in front of the Dekalb County Fire and Police Headquarters. The memorial pays homage to the 343 New York Firefighters, 60 New York and Port Authority Police Officers and the more than 2800 civilian victims of the terrorist attacks in New York, Washington D.C. and Shanksville, PA on September 11, 2001.

A piece of steel from one of the World Trade Center Towers in New York City is the centerpiece of this monument. This monument will preserve the memories of the day’s events for generations to come.