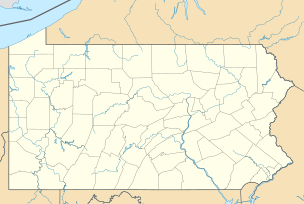 DeSales University is a private Catholic university for men and women, located in Lehigh County, Pennsylvania, in the United States. Before 2001, it was known as Allentown College of St. Francis de Sales. It is endorsed by The Newman Guide to Choosing a Catholic College.

On February 11, 1961, Joseph McShea was appointed Bishop of the Allentown Diocese by Pope John XXIII. This Diocese is composed of five counties in eastern Pennsylvania: Berks, Carbon, Lehigh, Northampton and Schuylkill. One of the first actions of Bishop McShea was to make a study of the educational facilities of the Diocese. Since the Allentown Diocese had been split off from the Archdiocese of Philadelphia, it already possessed a well-organized elementary and high school educational system. It was evident, however, that the system needed to be enlarged. Bishop McShea announced that there would be a drive to obtain funds for the expansion of the high school system, and at the same time, he called attention to the fact that there was no Catholic college for men in the Diocese. At the request of the Bishop, the Oblates of St. Francis de Sales agreed to assume the responsibility for establishing a liberal arts college to serve this need.

Planning for the new college began in April 1962, and the charter for Allentown College of St. Francis de Sales, with full power to award the Bachelor of Arts and Bachelor of Science degrees, was granted by the Commonwealth of Pennsylvania on May 27, 1964. Classes began for freshmen in September 1965. Allentown College was fully accredited by the Middle States Association of Colleges and Schools during the 1969-1970 academic year. In September 1970, the College became a co-educational institution. ACCESS, the College's continuing education department, was established in the fall of 1977. In the spring of 1988, the College opened the Easton campus, an extension of its ACCESS evening degree program.

The College's course offerings continued to grow. A Master of Science in Nursing degree was introduced in 1984; the Master of Science in Management Information Systems in September 1988; and an M.Ed. program in the summer of 1989. In August 1991, the College began its MBA program and in 1995, developed an MBA track in health and systems management, offered on the main campus and via distance learning in Harrisburg. In the fall of 1998, Allentown College began offering an undergraduate degree in elementary education with a special education minor, and the College became the first Catholic College in the country to offer a major in marriage and family studies.

On March 1, 2000, Allentown College received official notification from the Pennsylvania Department of Education that its application for university status had been approved. In addition, the department approved the use of the name "DeSales University"; (DSU). The College's Board of Trustees voted in favor of these changes on April 13, 2000. The name and status changes, effective January 1, 2001, were made in recognition of the institution's academic excellence, faculty commitment, Catholic heritage and continued growth in graduate education.

The 2011 edition of Best Colleges from US News & World Report ranked DeSales University as 67 in the "Universities-Master's (North)" category.[6]

The 2009 edition of Best Colleges from US News & World Report ranked DeSales University as 52 in the "Universities-Master's (North)" category.

The 2008 edition of Best Colleges from US News & World Report's ranked DeSales in its "Selective" admissions category and 57th in the "Universities-Master's (North)" category.

DeSales is a private, four-year Catholic university for men and women administered by the Oblates of St. Francis de Sales.

DeSales is accredited by the Middle States Association of Colleges and Secondary Schools and the Accreditation Commission for Education in Nursing (ACEN). The Physician Assistant Program also holds accreditation from the Commission on the Accreditation of Allied Health Programs (CAAHEP). All business programs are accredited by the Association of Collegiate Business Schools and Programs (ACBSP). DeSales is also a member of the Lehigh Valley Association of Independent Colleges, which offers cross-registration and interlibrary loan with the Lehigh Valley-based Cedar Crest College, Lafayette College, Lehigh University, Moravian College, and Muhlenberg College.