The DeSoto (sometimes De Soto) is an American automobile marque that was manufactured and marketed by the DeSoto Division of the Chrysler Corporation from 1928 to the 1961 model year. The De Soto marque was officially dropped November 30, 1960, with over two million vehicles built since 1928.[1] 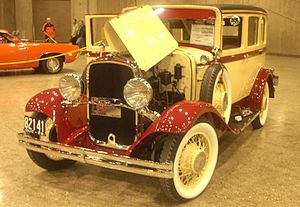 The DeSoto make was founded by Walter Chrysler on August 4, 1928, and introduced for the 1929 model year. It was named after the Spanish explorer Hernando de Soto. The DeSoto logo featured a stylized image of the explorer who led the first European expedition deep into the territory of the modern-day United States (Florida, Georgia, and Alabama), and was the first documented European to have crossed the Mississippi River.

Chrysler wanted to enter the brand in competition with its competitors Oldsmobile, Mercury, Studebaker, Hudson, and Willys-Knight, in the mid-price class. DeSoto served as a lower priced version of Chrysler products, with Dodge and Plymouth added to the Chrysler family in 1928.

The inaugural DeSoto model year sales in 1929 totaled 81,065 cars, a first year record in the U.S. that lasted until the 1960 Ford Falcon.[2] Shortly after DeSoto was introduced, however, Chrysler completed its purchase of the Dodge Brothers, giving the company two mid-priced makes. Initially, the two-make strategy was relatively successful, with DeSoto priced below Dodge models. Despite the economic times, DeSoto sales were relatively healthy, pacing Dodge at around 25,000 units in 1932.

However, in 1933, Chrysler reversed the market positions of the two marques in hopes of boosting Dodge sales. By elevating DeSoto, it received Chrysler's streamlined 1934 Airflow bodies. But, on the shorter DeSoto wheelbase, the design was a disaster and was unpopular with consumers. Unlike Chrysler, which still had more traditional models to fall back on, DeSoto was hobbled by the Airflow design until the 1935 Airstream arrived.

Aside from its Airflow models, DeSoto's 1942 model is probably its second most memorable model from the pre-war years, when the cars were fitted with powered pop-up headlights, a first for a North American mass-production vehicle. (The Cord 810 introduced dashboard hand cranked hidden headlamps in the 1936 model year.) DeSoto marketed the feature as "Air-Foil" lights ("Out of Sight Except at Night"). 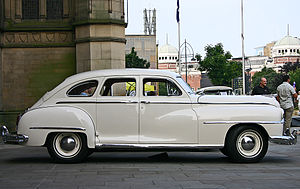 After wartime restrictions on automotive production were ended, DeSoto returned to civilian car production when it reissued its 1942 models as 1946 models, but without the hidden-headlight feature, and with fender lines extending into the doors, like other Chrysler products of the immediate postwar period.

At its height, DeSoto's more popular models included the Firesweep, Firedome, and Fireflite. The DeSoto Adventurer, introduced for 1956 as a high-performance hard-top coupe (similar to Chrysler's 300), became a full-range model in 1960.

In 1955,[3] along with all Chrysler models, De Sotos were redesigned with Virgil Exner's "Forward Look." DeSotos sold well through the 1956 model year. That year, for the first and only time in the marque's history, it served as Pace Car at the Indianapolis 500.[4] For the 1956 update Exner gave the DeSoto soaring tailfins fitted with triple taillights, and consumers responded by buying record numbers.

The 1957 had a well integrated design, with two variations: the smaller Firesweep, the Firedome/Fireflite body placed on the concurrent Dodge 122-inch wheelbase chassis with Dodge front fenders; and the Firedome and Fireflite (and its halo model Adventurer sub-series), based on the larger 126-inch wheelbase chassis shared with Chrysler. As was conventional in the era, subsequent years within the typical three-year model block were distinguished by trim, bumper, and other low-cost modifications, typically by adding bulk to bumpers and grilles, taillight changes, color choices, instrumentation and interior design changes and often additional external trim.

The 1958 economic downturn hurt sales of mid-priced makes across the board, and DeSoto sales were 60 percent lower than those of 1957 in what would be DeSoto's worst year since 1938. Also Ford Motor Company had introduced a new mid-price competitor for the 1958 model year with the Edsel. The sales slide continued for 1959 and 1960 (down 40 percent from the already low 1959 figures), and rumors began to circulate DeSoto was going to be discontinued.

By the time the 1961 DeSoto was introduced in the fall of 1960, rumors were widespread that Chrysler was moving towards terminating the brand, fueled by a reduction in model offerings for the 1960 model year. The introduction of the lower priced Newport to the upscale Chrysler brand no doubt hastened the decision to end production of DeSoto, which was very similar in size, styling, price, and standard features.

For 1961, DeSoto lost its series designations entirely, in a move reminiscent of Packard's final lineup. And, like the final Packards, the final DeSoto was of questionable design merit. Again, based on the shorter Chrysler Windsor wheelbase, the DeSoto featured a two-tiered grille (each tier with a different texture) and revised taillights. Only a two-door hardtop and a four-door hardtop were offered. The cars were trimmed similarly to the 1960 Fireflite.

The final decision to discontinue DeSoto was announced on November 30, 1960, just forty-seven days after the 1961 models were introduced. At the time, Chrysler warehouses contained several million dollars in 1961 DeSoto parts, so the company ramped up production in order to use up the stock. Chrysler and Plymouth dealers, which had been forced to take possession of DeSotos under the terms of their franchise agreements, received no compensation from Chrysler for their unsold DeSotos at the time of the formal announcement. Making matters worse, Chrysler kept shipping the cars through December, many of which were sold at a loss by dealers eager to be rid of them. After the parts stock was exhausted, a few outstanding customer orders were filled with Chrysler Windsors.

Despite being a successful mid-priced line for Chrysler for most of its life, DeSoto's failure was due to a combination of corporate mistakes and external factors beyond Chrysler's control. The Chrysler brand (under post-war pressures from consumers in the market) was essentially moved (by customer's changing market tastes) from a luxury automaker to a mid-priced automaker when Chrysler itself launched the separate Imperial brand in 1954 for the 1955 model year. And the mid-priced market segment was already filled with mid-priced brands of the other "big-three" rivals Ford, and GM, plus Chrysler's own model the Newport. Most DeSoto models were merged into the new Chrysler Newport in 1961.

The 1958 recession seriously affected demand for mid-priced automobile makes. DeSoto sales were particularly affected, and sales failed to recover in 1959 and 1960. With falling sales, the 1959 and 1960 models were very similar to the concurrent Chryslers. Moreover, rumors began to circulate that DeSoto would be discontinued. 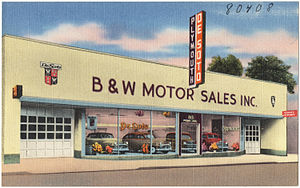 Chrysler's dealer network also had an effect on the termination of DeSoto. Following World War II, Chrysler had a large number of dealers that carried two or more Chrysler makes, with DeSoto-Plymouth and Chrysler–Plymouth relationships being the most common. However, as Chrysler attempted to spin Plymouth off into stand-alone dealerships, existing dealers typically chose to become higher-volume Plymouth dealerships over the slower-selling DeSoto brand, leaving the marque with a weakened dealer network and fewer outlets selling its cars. Also, DeSoto Division's failure to adjust to changing market trends by introducing a new compact car model in 1960 as its GM and Ford counterparts, as well as its own Dodge and Plymouth siblings did, also hastened its demise.

Chrysler's brand management during the 1950s pitted each of the five marques (Plymouth, Dodge, DeSoto, Chrysler, and Imperial) against one other, that caused the greatest damage to DeSoto. Rather than managing the market relationship to specific price points for particular consumers, as General Motors had done successfully, Chrysler allowed its own divisions to develop products targeting markets covered by their own sister divisions. Dodge was most successful when it introduced the lower-priced Dodge Dart in 1960. The Dart was advertised in comparison to the "C" car, the "F" car, and the "P" car (Chevrolet, Ford, and Plymouth, respectively). While sales of the Dart increased in 1960, they did so at the expense of Plymouth. Traditionally one of the "low priced three", Plymouth fell out of third place, only to regain it twice (1971 and 1974) before its own demise in 2001.

Dodge moved upmarket with the Custom Royal in the mid-1950s, which cut into and eroded DeSoto's traditional market segment. The introduction of the 1957 DeSoto Firesweep, a model that used the Dodge engine, chassis, front fenders, and hood, pushed DeSoto down into Dodge territory competing directly against the Custom Royal. The Firesweep sold well, but at the expense of the higher priced Firedome and Fireflite models. The DeSoto began looking like a Chrysler with a different grille and taillights, which, in an era of strong make identification, was a recipe for disaster.

When Chrysler marketing showed that consumers were likelier to buy an entry-level Chrysler than a DeSoto, Chrysler introduced the Chrysler Newport as a 1961 model, selling more than 45,000 units in its first year. At less than $3,000, the Newport covered the same price range as the 1961 DeSoto, which had sold 3,034 units total. Thus the DeSoto was dropped and replaced by Chrysler Newport.

Going in the opposite direction, Chrysler pushed into the luxury market by marketing the luxury 'Imperial' as a separate make and division starting in 1955. To make room for the new make, Chrysler Division began expanding downward, while Dodge Division began expanding upward, with larger and more luxurious models. Both Chrysler and Dodge began eating into DeSoto's already small market; and Chrysler's upper management did nothing to stop them.

Chrysler Corporation introduced the DeSoto brand of trucks in 1937 to provide a greater number of sales outlets overseas for the American-built Dodge and Fargo commercial vehicles. The DeSoto brand was badge engineered sporadically on Dodge trucks made in Argentina, Australia, Spain, Turkey, and the United Kingdom.

Chrysler ended its truck operations in international markets. However, both the DeSoto and Fargo brands continue to be used on trucks made by Askam in Turkey. In 1978, Chrysler sold its share in the Askam venture to its Turkish partners.[5] 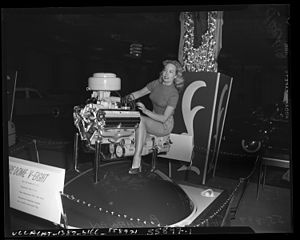 DeSoto sponsored the popular television game show You Bet Your Life from 1950 through 1958, in which host Groucho Marx promoted the product by urging viewers to visit a DeSoto dealer with the phrase "tell 'em Groucho sent you", and to "drive a DeSoto before you decide". There was also a DeSoto Plymouth logo visible in the background all during the show.

The Cole Porter song "It's De-Lovely" was used, with his permission, in DeSoto advertising between 1955 and 1957. The revised song lyrics: "It's delovely, it's dynamic, it's DeSoto."

DeSotos were used in NASCAR's Grand National series in the 1950s.