The de Havilland Canada DHC-6 Twin Otter is a Canadian 19-passenger STOL (Short Takeoff and Landing) utility aircraft developed by de Havilland Canada and currently produced by Viking Air. The aircraft's fixed tricycle undercarriage, STOL abilities and high rate of climb have made it a successful cargo, regional passenger airliner and MEDEVAC aircraft. In addition, the Twin Otter has been popular with commercial skydiving operations, and is used by the United States Army Parachute Team and the United States Air Force's 98th Flying Training Squadron. 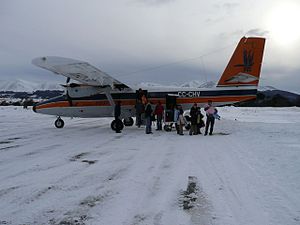 A Twin Otter making a normal landing approach in Queensland. 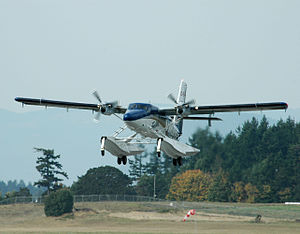 Development of the aircraft began in 1964, with the first flight on May 20, 1965. A twin-engined replacement for the single-engined DHC-3 Otter retaining DHC's renowned STOL qualities, design features included double-slotted trailing edge flaps and ailerons that work in unison with the flaps to boost STOL performance. The availability of the 550 shp (410 kW) Pratt and Whitney Canada PT6A-20 propeller turboprop in the early 1960s made the concept of a twin more feasible. To bush operators, the improved reliability of turboprop power and the improved performance of a twin-engined configuration made it an immediately popular alternative to the piston-powered Otter which had been flying since 1951.

The first six aircraft produced were designated Series 1, indicating that they were prototype aircraft. The initial production run consisted of Series 100 aircraft, serial number seven to 115 inclusive. In 1968, Series 200 production began with serial number 116. Changes made at the beginning of Series 200 production included improving the STOL performance, adding a longer nose that was equipped with a larger baggage compartment (except for aircraft fitted with floats) and fitting a larger door to the rear baggage compartment. All Series 1, 100 and 200 aircraft and their variants (110, 210) were fitted with the 550 shaft-horsepower PT6A-20 engines.

In 1969, the Series 300 was introduced, beginning with serial number 231. Both aircraft performance and payload were improved by fitting more powerful PT6A-27 engines. This was a 680 hp (510 kW) engine that was flat-rated to 620 hp (460 kW) for use in the Series 300 Twin Otter. The Series 300 proved to be the most successful variant by far, with 614 Series 300 aircraft and their sub-variants (Series 310 for United Kingdom operators, Series 320 for Australian operators, etc.) sold before production in Toronto by de Havilland Canada ended in 1988.

After Series 300 production ended, the remaining tooling was purchased by Viking Air of Victoria, British Columbia, who manufacture replacement parts for all of the out-of-production de Havilland Canada aircraft. On February 24, 2006, Viking purchased the type certificates from Bombardier Aerospace for all the out-of-production de Havilland DHC-1 through DHC-7 aircraft.[3] The ownership of the certificates gives Viking the exclusive right to manufacture new aircraft.

On July 17, 2006, at the Farnborough Air Show, Viking Air announced its intention to offer a Series 400 Twin Otter. On April 2, 2007, Viking announced that with 27 orders and options in hand, it was restarting production of the Twin Otter, equipped with a more powerful Pratt & Whitney Canada PT6A-34 engine.[4] As of November 2007, 40 firm orders and 10 options had been taken and a new final assembly plant established in Calgary, Alberta.[5][6] Zimex Aviation of Switzerland received the first new production aircraft, serial number 845, in July 2010.[7][8] As of summer 2014, Viking has built 55 new aircraft at their Calgary facility. Serial number 900 took flight in spring 2014. The production rate as of summer 2014 was approximately 24 aircraft per year. In April 2015, Viking announced a reduction of the production rate to 18 aircraft per year.[9] On June 17, 2015 Viking further announced a partnership with a Chinese firm, Reignwood Aviation Group. The group will purchase 50 airplanes and become the exclusive representatives for new Series 400 Twin Otters in China.

Major changes introduced with the Series 400 include Honeywell Primus Apex fully integrated avionics, deletion of the AC electrical system, deletion of the beta backup system, modernization of the electrical and lighting system, and use of composites for non-load-bearing structures such as doors.[10] 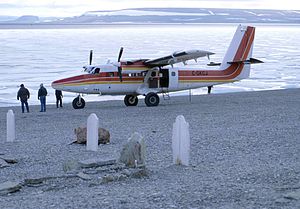 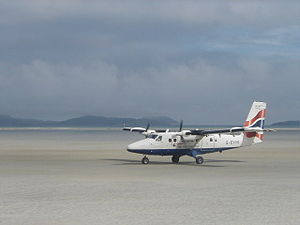 Twin Otters could be delivered directly from the factory with floats, skis or tricycle landing gear fittings, making them adaptable bush planes for remote and northern areas including Canada and the United States, specifically Alaska. Many Twin Otters still serve in the far north, but they can also be found in Africa, Australia, Antarctica and other regions where bush planes are the optimum means of travel. Their versatility and maneuverability have made them popular in areas with difficult flying environments, including Papua New Guinea. In Norway, the Twin Otter paved the way for the network of short-field airports, connecting the rural areas with the larger towns with outstanding reliability, and remained in service until 2000 on certain routes. Widerøe of Norway was, at one time, the world's largest operator of Twin Otters. During one period of its tenure in Norway, the Twin Otter fleet achieved over 96,000 cycles (takeoff, flight and landing) per year.

A number of commuter airlines in the United States got their start by operating Twin Otters in scheduled passenger operations. Houston Metro Airlines (which later changed its name to Metro Airlines) constructed their own STOLport airstrip with a passenger terminal and maintenance hangar in Clear Lake City, Texas near the NASA Johnson Space Center. The Clear Lake City STOLport was specifically designed for Twin Otter operations. According to the February 1976 edition of the Official Airline Guide (OAG), Houston Metro operated 22 round-trip flights every weekday at this time between Clear Lake City (CLC) and Houston Intercontinental Airport (IAH, now Houston George Bush Intercontinental Airport) in a scheduled passenger airline shuttle operation.[11] Houston Metro had agreements in place for connecting passenger feed services with Continental Airlines and Eastern Airlines at Houston Intercontinental, with this major airport having a dedicated STOL landing area at the time specifically for Twin Otter flight operations. The Clear Lake City STOLport is no longer in existence.

The Walt Disney World resort in Florida was also served with scheduled airline flights operated with Twin Otter aircraft. The Walt Disney World Airport (WDS), also known as the Lake Buena Vista STOLport, was a private airfield constructed by the Walt Disney Company with Twin Otter operations in mind. In the early 1970s, Shawnee Airlines operated scheduled Twin Otter flights between the Disney resort and nearby Orlando Jetport (MCO, now Orlando International Airport) as well as to Tampa International Airport (TPA). This service by Shawnee Airlines is mentioned in the "Air Commuter Section" of the Sept, 6, 1972 Eastern Air Lines system timetable as a connecting service to and from Eastern flights.[12] This STOL airfield is no longer in use.

Another commuter airline in the U.S., Rocky Mountain Airways, operated Twin Otters from the Lake County Airport in Leadville, CO. At an elevation of 9,927 feet above mean sea level, this airport is the highest airfield in the U.S. ever to have received scheduled passenger airline service, thus demonstrating the wide ranging flight capabilities exhibited by the Twin Otter. Rocky Mountain Airways went on to become the worldwide launch customer for the larger, four-engined de Havilland Canada DHC-7 Dash 7 STOL turboprop but continued to operate the Twin Otter as well.

The Argentine Air Force has used them in Antarctica[18] since the 1970s with at least one of them deployed the whole year at Marambio Base.[19] The Chilean Air Force has operated the type from 1980, usually having an example based at Presidente Frei Antarctic base of the South Shetland islands. 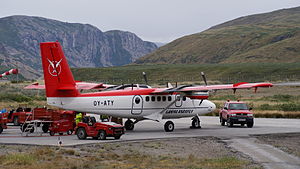 As of August 2006, a total of 584 Twin Otter aircraft (all variants) remain in service worldwide. Major operators include: Libyan Arab Airlines (16), Maldivian Air Taxi (22), Trans Maldivian Airways (23), Kenn Borek Air (42)[20] and Scenic Airlines (11). Some 115 airlines operate smaller numbers of the aircraft including Yeti Airlines in Nepal, Malaysia Airlines which uses the Twin Otter exclusively for passenger and freight transportation to the Kelabit Highlands region in Sarawak, and in the United Kingdom the FlyBe franchise operator Loganair which uses the aircraft to service the island of Barra in the Hebrides islands. This daily scheduled service is unique as the aircraft lands on the beach and the schedule is partly influenced by the tide tables. Trials in Barra with heavier planes than the Twin Otter, like the Short Belfast, failed because they sunk in the sand. The Twin Otter is also used for landing at the world's shortest commercial runway on the Caribbean island of Saba, Netherlands Antilles.

Ontario's Ministry of Natural Resources is also a long-time operator of the Twin Otter.

Transport Canada still owns three DHC-6 Twin Otter aircraft, but they now see very limited flying time, as their role in coastal surveillance has been assumed by a fleet of DHC-8s.[citation needed]

On 26 April 2001, the first ever air rescue during polar winter from the South Pole occurred with a ski-equipped Twin Otter operated by Kenn Borek Air.[22][23][24] 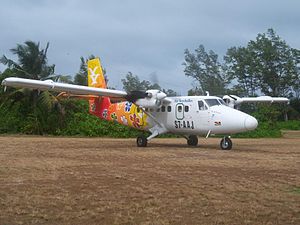 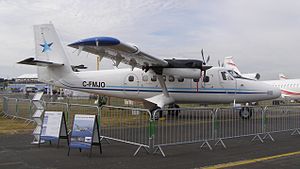 The Twin Otter has been popular not only with bush operators as a replacement for the single-engine de Havilland Canada DHC-3 Otter but also with other civil and military customers, with over 890 aircraft built. Many commuter airlines in the U.S. got their start by flying the Twin Otter in scheduled passenger operations. 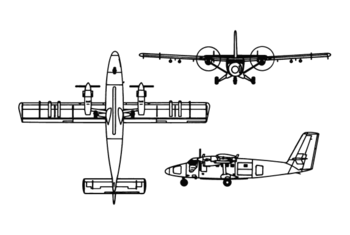