De Tomaso Modena SpA was an Italian car-manufacturing company. It was founded by the Argentine-born Alejandro de Tomaso (1928–2003) in Modena in 1959. It originally produced various prototypes and racing cars, including a Formula One car for Frank Williams' team in 1970. The company went on to develop and produce both sports cars and luxury vehicles. From 1976 to 1993 De Tomaso owned legendary Italian sports car maker Maserati, and was responsible for producing cars including the Biturbo, the Kyalami, Quattroporte III, Karif, and the Chrysler TC. De Tomaso also owned motorcycle company Moto Guzzi from 1973 to 1993.

De Tomaso went into liquidation in 2004,[1] although production of new cars continued after this date.[2] By 2008 a buyer was being sought for the De Tomaso factory and trademarks, as per the court-appointed liquidators.[3] In 2009 Gian Mario Rossignolo bought the De Tomaso trademark and founded a new company named De Tomaso Automobili SpA. Rossignolo planned to assemble chassis and bodies in one of Delphi Automotive’s old production facilities in Livorno and to fit bodywork, paint and finish its cars in the former Pininfarina factory in Grugliasco.[4]

In 2014 the original workshop in Modena was in abandonment.[5]

In May 2012, De Tomaso was again for sale after their business plan failed to gather sufficient financial backing.[6] In July 2012, Gian Mario Rossignolo was arrested following allegations that he misused €7.5 million worth of government funds.[7] In September 2012, speculation emerged that BMW might be interested in the brand factory to produce new BMW models.[8]

In April 2015 an Italian bankruptcy court approved the sale of the company to China's Consolidated Ideal TeamVenture, for a mere 1.05 million euros, or approximately $1.17 million USD.[9] Per that sale report "A lawyer for the buyer announced that Ideal TeamVenture plans to produce cars in China bearing the De Tomaso name."[9] 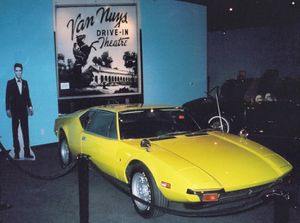 De Tomaso's first road-going production model was the Vallelunga (named after the racing circuit) introduced in 1963. This mid-engined sports car had a 104 bhp (78 kW) Ford Cortina engine, and reached a top speed of 215 km/h (134 mph). It had an aluminium backbone chassis, which was to become a common feature of De Tomaso cars. The first 5 cars were produced in aluminium while production cars had fibreglass bodywork.

The Mangusta, introduced in 1966 was the first De Tomaso produced in significant numbers. With the Mangusta, De Tomaso moved from European to American Ford engines. The car had a 4.7-litre iron-block V8 engine and steel and aluminium coupé bodywork from Ghia—an Italian coachbuilder also controlled by Alejandro de Tomaso. About 400 Mangustas were built before production ended in 1971.

The Mangusta was succeeded by the Pantera. It appeared in 1971 with a 351 Cleveland Ford V8 and a low, wedge-shaped body designed by Ghia's Tom Tjaarda.[10] Through an agreement with Ford, De Tomaso sold Panteras in the USA through Ford's Lincoln and Mercury dealers. Between 1971 and 1973, 6,128 Panteras were produced in Modena, the largest number of a single marque of De Tomaso produced. The 1973 oil crisis and other factors compelled Ford to pull out of the Pantera deal at the end of 1973.

During the late 1970s and 1980s Pantera production continued at a greatly reduced scale of less than 100 cars per year. From then on, the cars were largely hand-built.

Incorporating a Marcello Gandini facelift, suspension redesign, partial chassis redesign and a new, smaller Ford engine, the Pantera 90 Si model was introduced in 1990. Only 38 90 Si models were sold before the Pantera was finally phased out in 1993 to make way for the radical, carbon-fibre-bodied Guarà.

The Guarà is De Tomaso’s most recent production car, and has been produced since 1993. The Guarà was designed by Carlo Gaino of Synthesis design,[11] an Italian design house; Gaino designed also the Maserati Barchetta.[12] The Guarà is available in coupé and barchetta versions and based on a Maserati competition car from 1991, the Guarà uses Ford and BMW parts in a composite body. As with all De Tomasos except the Pantera, production has been both small and sporadic.

In the early 2000s two other cars were planned by De Tomaso, but both proved abortive. A two-seat Gandini-styled convertible, the Biguà, was developed from a 1996 Geneva concept in partnership with Qvale, an American firm which had long imported European sports cars into the USA. But as production of the Biguà—renamed the Mangusta—began, the relationship between De Tomaso and Qvale soured; Qvale took over the car and rebadged as the Qvale Mangusta. Production was short-lived, and Qvale’s Italian factory was bought in 2003 by MG Rover and the Mangusta mechanics used as the basis of the MG XPower SV. In April 2002, De Tomaso began a project to build off-road vehicles in a new factory in Calabria in partnership with the Russian company UAZ, but this too foundered. The deal projected a production rate of 10,000 cars a year by 2006: however, no cars were built and De Tomaso went into voluntary liquidation in June 2004. The Guarà remained available in some markets in 2005 and 2006, but it appears that no cars were built after 2004.[13]

Although De Tomaso is principally known as a maker of high-performance sports cars, the firm also produced luxury coupés and saloons in tiny number throughout the 1970s and 1980s.

The 1971 Deauville was De Tomaso's attempt to rival contemporary Jaguar and Mercedes-Benz saloons. With the same engine as the Pantera mounted in the front, the Deauville was clothed in an angular Tjaarda/Ghia four-door body. The Deauville did not compete with its rivals, especially those from Germany, on the quality of its build. Despite remaining on De Tomaso's books until 1985, only 244 were ever made. A single example of an estate was built for Alejandro de Tomaso's wife, the American racing driver Isabelle Haskell.

In 1972 De Tomaso introduced a coupé based on the Deauville, the Longchamp. The Longchamp used a slightly shortened Deauville chassis and had the same Ford V8 engine. The body design, however, was substantially different, and influenced by the Lancia Marica prototype, also designed by Tom Tjaarda.[citation needed] A total of 409 Longchamps of all variations were built, by the time the production ended in 1989.

In 1976, Alejandro de Tomaso, with the assistance of the Italian government, took over Maserati after its owner Citroën declared that it would no longer support the loss-making company. The first Maserati that the De Tomaso regime introduced, the Kyalami, was a redesigned Longchamp by Frua, with the Ford engine replaced by Maserati's own 4.2-litre V8. The Kyalami remained in production until 1983, when it was superseded by the Maserati Biturbo, introduced two years earlier.

In 1976, the Innocenti passed to Alejandro de Tomaso and was reorganised by the De Tomaso Group under the name Nuova Innocenti.

De Tomaso sold the Innocenti to Fiat in 1993.

In 2009 the De Tomaso trademark was bought by Gian Mario Rossignolo who founded a new company named De Tomaso Automobili SpA. A new business plan for the company called for producing three models for a total of 8,000 vehicles: 3,000 crossovers, 3,000 limousines, and 2,000 two-seater sports cars. 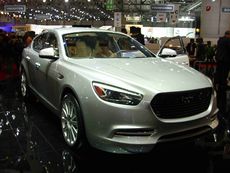 At the 2011 Geneva Motor Show, De Tomaso presented a new model.[14] The new De Tomaso Deauville should have been a five-door hatchback/crossover vehicle with all-wheel drive, which, in the details of its styling, quotes models from BMW and Mercedes-Benz.[15] The proposed range included two gasoline engines with 300 PS and 500 PS as well as a diesel from VM Motori with 250 PS. The Deauville remained a prototype, as the new company never started production and Rossignolo was arrested in 2012.[16] 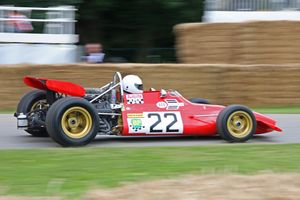 Following a handful of Formula One appearances from 1961 to 1963, De Tomaso built a Formula One chassis (designed by Gian Paolo Dallara) for Frank Williams Racing Cars to use in the 1970 Formula One season. The car was initially uncompetitive, failing to finish the first four races of the year. In the fifth, the Dutch Grand Prix, the De Tomaso 505/38 flipped and caught fire, killing driver Piers Courage. The team persevered, first with Brian Redman, then Tim Schenken. However, with no results, the partnership was dissolved at the end of the season. 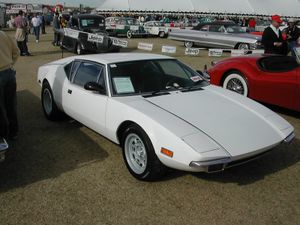