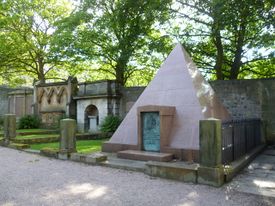 The Dean Cemetery is a historically important Victorian cemetery north of the Dean Village, west of Edinburgh city centre, in Scotland. It lies between Queensferry Road and the Water of Leith, bounded on its east side by Dean Path and on its west by the Dean Gallery. A 20th century extension lies detached from the main cemetery to the north of Ravelston Terrace. The main cemetery is accessible through the main gate on its east side, through a "grace and favour" access door from the grounds of Dean Gallery and from Ravelston Terrace. The modern extension is only accessible at the junction of Dean Path and Queensferry Road.

Dean Cemetery, also known as Edinburgh Western Cemetery,[1] was laid out by David Cousin (an Edinburgh architect who also laid out Warriston Cemetery) in 1846 and became a fashionable burial ground, its monuments becoming a rich source of Edinburgh and Victorian history, for mainly the middle and upper-classes. The many monuments bear witness to Scottish achievement in peace and war, at home and abroad.

As the cemetery plots were quickly bought up the cemetery was extended on its north side in 1871.[2] A second set of entrance gates were built on Dean Path, matching the original entrance. Although this section was originally only accessed through this gate the extension was quickly linked to the original section by creating gaps in the mutual wall where no graves existed. This extension is laid out in a more rectilinear pattern than the original curvelinear layout.

The separated section north of Ravelston Terrace (previously Edgehill Nursery[3]) was purchased in 1877 in anticipation of a sales rate matching that of the original cemetery, but this was not to be, and the area only began to be used in 1909 (excepting John Ritchie Findlay (1898) alone for a decade). This section is relatively plain and generally unremarkable, but does include a line of Scottish Law Lords against the north wall, perhaps trying to echo the "Lord's Row" against the west wall of the original cemetery. Whilst numerically greater in its number of lords it is far less eye-catching.

The entire cemetery is privately owned by the Dean Cemetery Trust Limited, making it one of the few cemeteries still run as it was intended to be run. The resultant layout, with its mature designed landscape, can be seen as an excellent example of a cemetery actually being visible in the form it was conceived to be seen.

The southern access from Belford Road is now blocked and the entrance road here is now grassed and used for the interment of ashes.

The cemetery stands on the site of Dean House (built 1614), part of Dean Estate which had been purchased in 1609 by Sir William Nisbet, who became in 1616 Lord Provost of Edinburgh. The Nisbets of Dean held the office of Hereditary Poulterer to the King. The famous herald, Alexander Nisbet, of Nisbet House, near Duns, Berwickshire, is said to have written his Systems of Heraldry in Dean House. The estate house was demolished in 1845, and sculptured stones from it are incorporated into the south retaining wall supporting at the south side of the cemetery. It is not always realised that this lower, hidden section also contains graves. 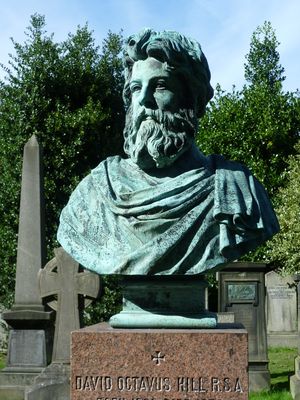 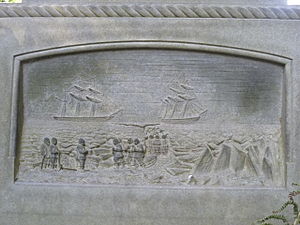 Other monuments of interest