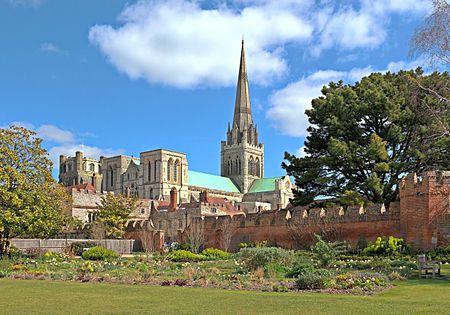 Bishop Ralph is credited with the foundation of the current cathedral after the original structure that had been built by Stigand was largely destroyed by fire in 1114.[1]

Ralph did not confine his activities just to rebuilding the cathedral, he provided for a more complete constitution of his chapter by also creating the offices of Dean, Precentor, Chancellor and Treasurer.[2] The function of these four officials was to ensure the proper conduct of church services, the care of the church building and the supervision of subordinates.[3] Beneath these four officials were the canons of the cathedral who in the medieval period were about twenty six in number.[4] The dean would have been elected by the canons, and would have the power to act in administrative matters only with their consent. [4] The dean and his staff, however, were subject to the bishop's authority.[3]

The dean headed the cathedral community and had jurisdiction over all the Chichester city parishes, with the exception of All Saints, which was under the administration of the Archbishop of Canterbury.[3] The four ancient posts of dean and canons still exist within the cathedral and their functions are similar to their ancient role, although somewhat diminished, as other church organisations have now taken over some of their powers.[5]

There follows a list of deans of Chichester, from Bishop Ralph's time, to the present dean, Stephen Waine.[6]