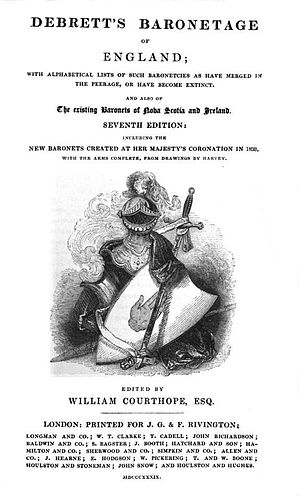 Debrett's (/dᵻˈbrɛts/[1]) is a specialist publisher, founded in 1769 with the publication of the first edition of The New Peerage. The name "Debrett's" honours John Debrett. Debrett's is published under the name Debrett’s Peerage & Baronetage, a book which includes a short history of the family of each titleholder. The editor of Debrett's Peerage and Baronetage is Charles Kidd.

In 2006, Debrett's updated its Correct Form – the definitive guide to forms of address in the UK – to include a section on Business Etiquette, and another on American Usage. 2007 saw the publication of a new Debrett's Wedding Guide, with advice on every aspect of the modern wedding, including traditional form for invitations, chapters on the roles and responsibilities of the bridal party, and a listing of who pays for what.

In recent years, books such as Debrett’s Etiquette for Girls, Debrett's A – Z of Modern Manners and Debrett's Guide for The Modern Gentleman have appeared.

In 2010 Debrett's published Thoroughly Modern Motoring Manners and Petiquette, along with the 148th edition of Peerage & Baronetage and the 2011 edition of People of Today. A special edition of Guide for The Modern Gentleman was also produced for Movember, the men's health charity, in support of its 2010 Modern Gentleman campaign theme. And the 2010 luxury diary range having sold out in 2009, the 2011 diary was published in a range of colours.

It contains biographical details of approximately 25,000 notable people from the entire spectrum of British society.[3] The selection of entrants is made by the editorial staff of Debrett's and entries are reviewed annually to ensure accuracy and relevance. Entries include details of career, education, family, recreations and membership of clubs as well as contact addresses. An additional feature is the correct style of address to be used when addressing correspondence to an entrant.

Like its rival publication Who's Who selection of entrants is at the Editorial Team's discretion and there is no payment or obligation to purchase. However, unlike Who's Who, entrants are removed if they are no longer deemed to be suitable for inclusion.[4][5]

Debrett's runs a website which contains 31,000 pages of advice and profiles.

In William Makepeace Thackeray's classic novel Vanity Fair (1847), the elderly aristocrat Sir Pitt Crawley is described as "a selfish boor [...] unworthy of his title" despite his name being in Debrett's. Sherlock Holmes turns frequently to Debrett's as a standard work of reference.[6] Edith Wharton's The Age of Innocence (1920) makes a glancing reference to one's "standing in Debrett." Debrett's is mentioned in The Picture of Dorian Gray and Lord Arthur Savile's Crime, both by Oscar Wilde, and is referred to satirically as a sacred book in the short story "Reginald at the Theatre" by Saki. In George Orwell's Burmese Days, Mrs. Lackersteen is described as reading the Civil List, "the Debrett of Burma". An out-of-date Debrett's is a key plot element in an Elizabeth Mapp story (1920–1939) by E.F. Benson. Debrett's Peerage is mentioned in P.G. Wodehouse novels, especially the Blandings stories, in which it is often referred to by Lord Emsworth. In Evelyn Waugh's Brideshead Revisited (1945), Charles Ryder mentions Sebastian's family, to which Sebastian replies "There are lots of us. Look them up in Debrett".

More recently, Debrett's was mentioned in John le Carré's spy novel The Tailor of Panama. Debrett's New Guide to Etiquette and Modern Manners was a guest publication on Have I Got News for You in 1999. In the fashion sitcom Absolutely Fabulous, the character of Patsy Stone (Joanna Lumley) calls Debrett's the "Who's Who in what's left of the British aristocracy". Debrett's Correct Form is mentioned by the cartoonist Giles. In the adult comic Viz, a strip called Billy Connolly has the titular character, who wishes to win the favour of the Queen, perusing a copy of Debrett's. In the Sky TV Show So You Think You're Royal, families who successfully proved heritage to the royal family were entered into Debrett's. The original peerage guide is mentioned in Connie Willis' novel To Say Nothing of the Dog, as a plot device to change one character's attitude toward another when she discovers he is listed in it. In the third season of Downton Abbey, the Countess of Grantham dryly comments to her husband that "not everyone chooses their religion to satisfy Debrett's".

John Debrett (1753 – 15 November 1822) was the London-born son of Jean Louys de Bret, a French cook of Huguenot extraction. As a boy of thirteen, John Debrett was apprenticed to a Piccadilly bookseller and publisher, Robert Davis. He remained there until 1780, when he moved to John Almon, bookseller and stationer. John Almon edited and published his first edition of The New Peerage in 1769, and went on to produce at least three further editions. By 1790 he had passed the editorship on to John Debrett who, in 1802, put his name to the two small volumes that made up The Correct Peerage of England, Scotland and Ireland. Despite twice being declared bankrupt, Debrett continued as a bookseller, and retired in 1814. He was found dead at his lodgings on 15 November 1822, and was buried at St James's, Piccadilly.[7]