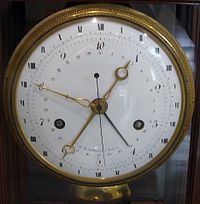 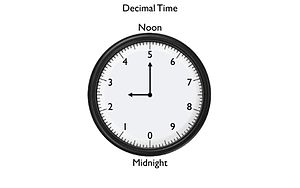 Decimal time is the representation of the time of day using units which are decimally related. This term is often used specifically to refer to French Revolutionary Time, which divided the day into 10 decimal hours, each decimal hour into 100 decimal minutes and each decimal minute into 100 decimal seconds, as opposed to the more familiar standard time, which divides the day into 24 hours, each hour into 60 minutes and each minute into 60 seconds.

The main advantage of a decimal time system is that, since the base used to divide the time is the same as the one used to represent it, the whole time representation can be handled as a single string. Therefore, it becomes simpler to interpret a timestamp and to perform conversions. For instance, 1:23:00 is 1 decimal hour and 23 decimal minutes, or 1.23 hours, or 123 minutes; 3 hours is 300 minutes or 30,000 seconds. This property also makes it straightforward to represent a timestamp as a fractional day, so that 2022-05-27.534 can be interpreted as five decimal hours and 34 decimal minutes after the start of that day, or 0.534 (53.4%) of a day through that day. It also adjusts well to digital time representation using epochs, in that the internal time representation can be used directly both for computation and for user-facing display.

Decimal time was used in China throughout most of its history alongside duodecimal time. The midnight-to-midnight day was divided both into 12 double hours (Traditional Chinese: 時辰; Simplified Chinese: 时辰; Pinyin: shíchen) and also into 10 shi / 100 ke (Hanzi: 刻; Pinyin: kè) by the 1st millennium BC.[1][2] Other numbers of ke per day were used during three short periods: 120 ke from 5–3 BC, 96 ke from 507–544 CE, and 108 ke from 544–565. Several of the roughly 50 Chinese calendars also divided each ke into 100 fen, although others divided each ke into 60 fen. In 1280, the Shoushi (Season Granting) calendar further subdivided each fen into 100 miao, creating a complete decimal time system of 100 ke, 100 fen and 100 miao.[3] Chinese decimal time ceased to be used in 1645 when the Shixian (Constant Conformity) calendar, based on European astronomy and brought to China by the Jesuits, adopted 96 ke per day alongside 12 double hours, making each ke exactly one-quarter hour.[4] 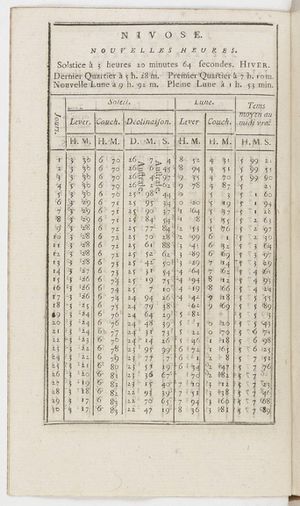 In 1754, Jean le Rond d'Alembert wrote in the Encyclopédie:

It would be very desirable that all divisions, for example of the livre, the sou, the toise, the day, the hour, etc. would be from tens into tens. This division would result in much easier and more convenient calculations and would be very preferable to the arbitrary division of the livre into twenty sous, of the sou into twelve deniers, of the day into twenty-four hours, the hour into sixty minutes, etc.[5][6]

In 1788, Claude Boniface Collignon proposed dividing the day into 10 hours or 1000 minutes, each new hour into 100 minutes, each new minute into 1000 seconds, and each new second into 1000 tierces (Latin for "third"). The distance the twilight zone travels in one such tierce at the equator, which would be one-billionth of the circumference of the earth, would be a new unit of length, provisionally called a half-handbreadth, equal to four modern centimeters. Further, the new tierce would be divided into 1000 quatierces, which he called "microscopic points of time". He also suggested a week of 10 days and dividing the year into 10 "solar months".[7]

Decimal time was officially introduced during the French Revolution. Jean-Charles de Borda made a proposal for decimal time on November 5, 1792. The National Convention issued a decree on 5 October 1793:

XI. The day, from midnight to midnight, is divided into ten parts, each part into ten others, and so forth until the smallest measurable portion of duration.

These parts were named on 24 November 1793 (4 Frimaire of the Year II). The primary divisions were called hours, and they added:

Thus, midnight was called either dix heures (10 o'clock) or zero heures (0 o'clock), noon was called cinq heures (5 o'clock), etc. Units were either written out or abbreviated, such as 8 h. 72 m. Sometimes in official records, decimal hours were divided into tenths, or décimes, instead of minutes.[8][9] Although clocks and watches were produced with faces showing both standard time with numbers 1–24 and decimal time with numbers 1–10, decimal time never caught on; it was not officially used until the beginning of the Republican year III, 22 September 1794, and mandatory use was suspended 7 April 1795 (18 Germinal of the Year III), in the same law which introduced the original metric system. Thus, although decimal time is sometimes referred to as metric time, the metric system at first had no time unit, and later versions of the metric system used the second, equal to 1/86400 day, as the metric time unit. In spite of this, decimal time was used in many cities, including Marseille and Toulouse, where a decimal clock with just an hour hand was on the front of the Capitole for five years.[8] On the Palace of the Tuileries in Paris, two of the four clock faces displayed decimal time until at least 1801.[10] The mathematician and astronomer Pierre-Simon Laplace had a decimal watch made for him, and used decimal time in his work, in the form of fractional days. Because of this, astronomers still use decimal time.

Decimal time was part of a larger attempt at decimalisation in revolutionary France (which also included decimalisation of currency and metrication) and was introduced as part of the French Republican Calendar, which, in addition to decimally dividing the day, divided the month into three décades of 10 days each; this calendar was abolished at the end of 1805. The start of each year was determined according to the day of the autumnal equinox, in relation to true or apparent solar time at the Paris Observatory. Decimal time would also have been reckoned according to apparent solar time, depending on the location it was observed, as was already the practice generally for the setting of clocks.

At the International Meridian Conference of 1884, the following resolution was proposed by the French delegation and passed nem con (with 3 abstentions):

VII. That the Conference expresses the hope that the technical studies designed to regulate and extend the application of the decimal system to the division of angular space and of time shall be resumed, so as to permit the extension of this application to all cases in which it presents real advantages.

In the 1890s, Joseph Charles François de Rey-Pailhade, president of the Toulouse Geographical Society, proposed dividing the day into 100 parts, called cés, equal to 14.4 standard minutes, and each divided into 10 decicés, 100 centicés, etc. The Toulouse Chamber of Commerce adopted a resolution supporting his proposal in April 1897. Although widely published, the proposal received little backing.[11]

The French made another attempt at the decimalization of time in 1897, when the Commission de décimalisation du temps was created by the Bureau des Longitudes, with the mathematician Henri Poincaré as secretary. The commission adopted a compromise, originally proposed by Henri de Sarrauton of the Oran Geographical Society, of retaining the 24-hour day, but dividing each hour into 100 decimal minutes, and each minute into 100 seconds. The plan did not gain acceptance and was abandoned in 1900.

On 23 October 1998, the Swiss watch company Swatch introduced a decimal time called Internet Time, which divides the day into 1000 decimal minutes (Swatch called them .beats), (each 86.4 seconds in standard time) counted from 000–999, with @000 being midnight and @500 being noon standard time in Switzerland, which is Central European Time (one hour ahead of Universal Time). A line painted on Swatch headquarters in the Swiss city of Biel (now Biel/Bienne) was declared to mark the Biel Meridian, and Central European Time was relabelled as "Biel Meantime" (BMT), even though it does not correspond to actual local mean time in Biel.[12]

Decimal time is commonly used in accounting for payrolls and hourly billing in the form of decimal hours. Time clocks typically record the time of day in tenths or hundredths of an hour. For instance, 8:30 am would be recorded as 08.50. This is intended to make accounting easier by eliminating the need to convert between minutes and hours.

The most common use of decimal time of day is as fractional days used by scientists and computer programmers.[citation needed] Standard 24-hour time is converted into a fractional day simply by dividing the number of hours elapsed since midnight by 24 to make a decimal fraction. Thus, midnight is 0.0 day, noon is 0.5 d, etc., which can be added to any type of date, including (all of which refer to the same moment):

As many decimal places may be used as required for precision, so 0.5 d = 0.500000 d. Fractional days are often calculated in UTC or TT, although Julian Dates use pre-1925 astronomical date/time (each date began at 0h thus ".0" = noon) and Microsoft Excel uses the local time zone of the computer. Using fractional days reduces the number of units in time calculations from four (days, hours, minutes, seconds) to just one (days).

Fractional days are often used by astronomers to record observations, and were expressed in relation to Paris Mean Time by the 18th century French mathematician and astronomer Pierre-Simon Laplace, as in these examples:[13]

Fractional days have been used by astronomers ever since. For instance, the 19th century British astronomer John Herschel gave these examples:[14]

Fractional days are commonly used to express epochs of orbital elements. The decimal fraction is usually added to the calendar date or Julian day for natural objects, or to the ordinal date for artificial satellites in two-line elements.

Decimal multiples and fractions of the second

The second is the International System of Units (SI) unit of time duration. It is also the standard single-unit time representation in many programming languages, most notably C, and part of UNIX/POSIX standards used by Linux, Mac OS X, etc.; to convert fractional days to fractional seconds, multiply the number by 86400. Fractional seconds are represented as milliseconds (ms), microseconds (μs) or nanoseconds (ns). Absolute times are usually represented relative to 1 January 1970, at midnight. Other systems may use a different zero point (a.k.a. Epoch).

In principle, time spans greater than one second are given in units such as kiloseconds (ks), megaseconds (Ms), gigaseconds (Gs), and so on. Occasionally, these units can be found in technical literature, but traditional units like minutes, hours, days and years are much more common, and are accepted for use with SI.

It is possible to specify the time of day as the number of kiloseconds elapsed since midnight. Thus, instead of saying 3:45 p.m. one could say (time of day) 56.7 ks. There are exactly 86.4 ks in one day. However, this nomenclature is rarely used in practice.

Scientists often record (rather than observe) time as decimals. For example, decimal days divides the day into 10 equal parts, and decimal years divides the year into 10 equal parts. Decimals are easier to plot than both (a) minutes and seconds, which uses the Sexagesimal numbering system, (b) hours, months and days, which has irregular month lengths. In astronomy, the so-called Julian day uses decimal days centered on noon.

Seconds in a decimal minute

Minutes in a decimal hour

Hours in a decimal day

Days and months in a decimal year

For aviation purposes, where it is common to add times in an already complicated environment, time tracking is simplified by recording decimal fractions of hours, so, for instance, if you add 1:36, and 2:36 instead of getting 3:72 and converting it to 4:12 you add 1.6 and 2.6 and get 4.2 hours.[16]

Numerous individuals have proposed variations of decimal time, dividing the day into different numbers of units and subunits with different names. Most are based upon fractional days, so that one decimal time format may be easily converted into another, such that all the following are equivalent: