Decimus Burton (30 September 1800 – 14 December 1881) was a prolific English architect and garden designer.[1] A protegé of John Nash, he is particularly associated with projects in the classical style in London parks, including buildings at the Royal Botanic Gardens, Kew and London Zoo, and with the layout and architecture of the seaside towns of Fleetwood and St Leonards-on-Sea, and the spa town Tunbridge Wells.

Decimus Burton was the son of the architect James Burton. His first name, from the Latin for 'tenth', denoted his position as the tenth child in his family.

After attending Tonbridge School and then spending a few years in Royal Academy Schools, Burton trained in the architectural and building practice run by his father James Burton. Through his father's work on the Regent Street and Regent's Park projects he came into contact with John Nash.[2] Nash entrusted him with the design of Cornwall Terrace and Clarence Terrace in Regent's Park[3] the former, begun in 1821, being the first building erected in the park.[4] James Burton was the builder of both.[3] His first major project (1823) was nearby: an enormous domed exhibition hall, the Colosseum. Circular in plan with a Doric portico,it resembled the Pantheon in form.[5] It was demolished in 1875; the site is now occupied by the Royal College of Physicians. After this, he was appointed to design the gardens and buildings at the adjacent new London Zoo including the llama building (1828), complete with a clock tower, and the Giraffe House (1834).

At the age of twenty-five Burton was commissioned by the Office of Woods and Forests to carry out a series of work intended, in the words of John Summerson "to bring Hyde Park within the monumental orbit of the palace". He laid out paths and driveways, designed a series of lodges, and the Ionic screen and Wellington Arch at Hyde Park Corner. These last two originally formed a single composition, designed to provide a monumental transition between Hyde Park and Green Park, although the arch was later moved. His other work for the Office of Woods and Forests included the elaborate Parliamentary Stables at Westminster.[6]

In 1824 he was commissioned by the Athenaeum Club, London to build a clubhouse for them on the west side of Waterloo Place. The task was complicated by the Office of Woods and Forests' initial desire to have its facade matching that of the United Services Club opposite, on which Nash was working. This demand was eventually dropped[7] and Burton's building was constructed in 1829–30,[8] its exterior decorated with a full-size replica of the Panathenaic frieze. Burton later made alterations to the United Service Club.[7] Burton's connections to the Athenaeum lasted for many years in the form of his membership and as evidenced in the 30 years of correspondence between himself and one of the club's founders, John Wilson Croker.[9]

In 1828 Burton's father James bought up an estate in East Sussex, on which he developed the new holiday resort of St Leonards. The development had a frontage to the sea of about 1 km (two-thirds of a mile). Burton was probably the architect of the central section, a hotel with giant Corinthian columns, flanked by terraces in the Tuscan order.[10]

Burton landscaped the grounds and designed the buildings at the Beulah Spa, a spa and pleasure gardens in Upper Norwood in south London, for the entrepreneur John Davidson Smith. It opened in 1831[11] and became a popular society venue attracting large crowds to its fêtes.[12] Burton's buildings were in a " rustic" style,[13] with the ticket office in the form of a thatched cottage.[11] The spa closed in 1856 soon after the opening nearby of the Crystal Palace.[14] Burton also drew up designs for a grand crescent of terraced houses on the hill above the spa, which was, however, never built.[11] 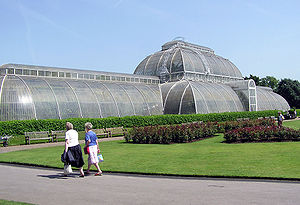 The Palm House at the Royal Botanic Gardens, Kew

Burton had a 30-year association with the Royal Botanic Gardens, Kew, beginning with the layout of gardens and paths before moving on to major buildings. With iron founder Richard Turner, he designed the glass and iron Palm House (1844–1848); at the time, this greenhouse was the largest in the world at 363 ft long (111 m), 100 ft wide (30 m) and 66 ft high (20 m).

He then designed the even larger Temperate House, but did not live to see the project completed: although a section opened in 1863, lack of funds meant it was not finally completed until 1898. Other projects at Kew Gardens included the Main Gate (1846; renamed the Elizabeth Gate in 2012 to mark the Diamond Jubilee of Elizabeth II) and the Water Lily House (1852).

Another major concentration of Burton’s work is at Fleetwood on the Lancashire coast. Burton's work with his father on the East Sussex town of St Leonards-on-Sea (1827–1837) had impressed wealthy landowner and fellow Atheneaum Club member Sir Peter Hesketh Fleetwood who commissioned Burton to lay out his new port and seaside resort. Burton's buildings include the North Euston Hotel, Pharos Lighthouse and Beach Lighthouse, Queen's Terrace, St Peter's Church, the Town Hall and his own house on Dock Street (where he lived until 1844).

Decimus Burton retired in 1869, died in December 1881 and was buried in Kensal Green Cemetery.