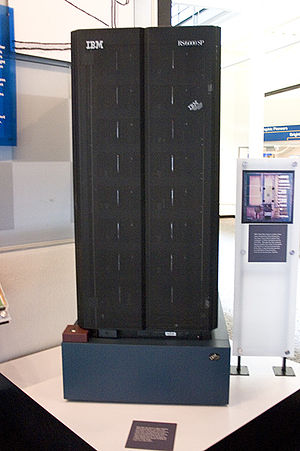 Deep Blue was a chess-playing computer developed by IBM. It is known for being the first piece of artificial intelligence to win both a chess game and a chess match against a reigning world champion under regular time controls.

Deep Blue won its first game against a world champion on February 10, 1996, when it defeated Garry Kasparov in game one of a six-game match. However, Kasparov won three and drew two of the following five games, defeating Deep Blue by a score of 4–2. Deep Blue was then heavily upgraded, and played Kasparov again in May 1997. Deep Blue won game six, therefore winning the six-game rematch 3½–2½ and becoming the first computer system to defeat a reigning world champion in a match under standard chess tournament time controls.[1] Kasparov accused IBM of cheating and demanded a rematch. IBM refused and retired Deep Blue.[2]

The project was started as ChipTest at Carnegie Mellon University by Feng-hsiung Hsu, followed by its successor, Deep Thought. After their graduation from Carnegie Mellon, Hsu, Thomas Anantharaman, and Murray Campbell from the Deep Thought team were hired by IBM Research to continue their quest to build a chess machine that could defeat the world champion.[3] Hsu and Campbell joined IBM in autumn 1989, with Anantharaman following later.[4] Anantharaman subsequently left IBM for Wall Street and Arthur Joseph Hoane joined the team to perform programming tasks.[5] Jerry Brody, a long-time employee of IBM Research, was recruited for the team in 1990.[6] The team was managed first by Randy Moulic, followed by Chung-Jen (C J) Tan.[7]

After Deep Thought's 1989 match against Kasparov, IBM held a contest to rename the chess machine and it became "Deep Blue", a play on IBM's nickname, "Big Blue".[8] After a scaled-down version of Deep Blue, Deep Blue Jr., played Grandmaster Joel Benjamin, Hsu and Campbell decided that Benjamin was the expert they were looking for to develop Deep Blue's opening book, and Benjamin was signed by IBM Research to assist with the preparations for Deep Blue's matches against Garry Kasparov.[9]

Deep Blue and Kasparov played each other on two occasions. The first match began on February 10, 1996, in which Deep Blue became the first machine to win a chess game against a reigning world champion (Garry Kasparov) under regular time controls. However, Kasparov won three and drew two of the following five games, beating Deep Blue by a score of 4–2 (wins count 1 point, draws count ½ point). The match concluded on February 17, 1996.

Deep Blue was then heavily upgraded (unofficially nicknamed "Deeper Blue")[11] and played Kasparov again in May 1997, winning the six-game rematch 3½–2½, ending on May 11. Deep Blue won the deciding game six after Kasparov made a mistake in the opening, becoming the first computer system to defeat a reigning world champion in a match under standard chess tournament time controls.

The system derived its playing strength mainly out of brute force computing power. It was a massively parallel, RS/6000 SP Thin P2SC-based system with 30 nodes, with each node containing a 120 MHz P2SC microprocessor, enhanced with 480 special purpose VLSI chess chips. Its chess playing program was written in C and ran under the AIX operating system. It was capable of evaluating 200 million positions per second, twice as fast as the 1996 version. In June 1997, Deep Blue was the 259th most powerful supercomputer according to the TOP500 list, achieving 11.38 GFLOPS on the High-Performance LINPACK benchmark.[12]

The Deep Blue chess computer that defeated Kasparov in 1997 would typically search to a depth of between six and eight moves to a maximum of twenty or even more moves in some situations.[13] Levy and Newborn estimate that one additional ply (half-move) increases the playing strength 50 to 70 Elo points.[14]

Deep Blue's evaluation function was initially written in a generalized form, with many to-be-determined parameters (e.g. how important is a safe king position compared to a space advantage in the center, etc.). The optimal values for these parameters were then determined by the system itself, by analyzing thousands of master games. The evaluation function had been split into 8,000 parts, many of them designed for special positions. In the opening book there were over 4,000 positions and 700,000 grandmaster games. The endgame database contained many six piece endgames and five or fewer piece positions. Before the second match, the chess knowledge of the program was fine tuned by grandmaster Joel Benjamin. The opening library was provided by grandmasters Miguel Illescas, John Fedorowicz, and Nick de Firmian. When Kasparov requested that he be allowed to study other games that Deep Blue had played so as to better understand his opponent, IBM refused. However, Kasparov did study many popular PC computer games to become familiar with computer game play in general.[citation needed]

Writer Nate Silver suggests that a bug in Deep Blue's software led to a seemingly random move (the 44th in the first game) which Kasparov misattributed to "superior intelligence". Subsequently, Kasparov experienced a drop in performance due to anxiety in the following game.[15]

After the loss, Kasparov said that he sometimes saw deep intelligence and creativity in the machine's moves, suggesting that during the second game, human chess players had intervened on behalf of the machine, which would be a violation of the rules. IBM denied that it cheated, saying the only human intervention occurred between games. The rules provided for the developers to modify the program between games, an opportunity they said they used to shore up weaknesses in the computer's play that were revealed during the course of the match. Kasparov requested printouts of the machine's log files but IBM refused, although the company later published the logs on the Internet.[16] Kasparov demanded a rematch, but IBM refused and dismantled Deep Blue.[17] Owing to an insufficient sample of games between Deep Blue and officially rated chess players, a chess rating for Deep Blue was not established.[citation needed]

In 2003 a documentary film was made that explored these claims. Entitled Game Over: Kasparov and the Machine, the film interviews some people who suggest that Deep Blue's victory was a ploy by IBM to boost its stock value.[17]

One of the cultural impacts of Deep Blue was the creation of a new game called Arimaa designed to be much more difficult for computers than chess.[18]

One of the two racks that made up Deep Blue is on display at the National Museum of American History in their exhibit about the Information Age[citation needed]; the other rack appears at the Computer History Museum in the "Artificial Intelligence and Robotics" gallery of the Revolution exhibit.[19] (Reports that Deep Blue was sold to United Airlines appear to originate from confusion between Deep Blue itself and other RS6000/SP2 systems.[20])

Feng-hsiung Hsu later claimed in his book Behind Deep Blue that he had the rights to use the Deep Blue design to build a bigger machine independently of IBM to take Kasparov's rematch offer, but Kasparov refused a rematch.[21]

Deep Blue, with its capability of evaluating 200 million positions per second, was the fastest computer that ever faced a world chess champion. Today, in computer chess research and matches of world class players against computers, the focus of play has often shifted to software chess programs, rather than using dedicated chess hardware. Modern chess programs like Houdini, Rybka, Deep Fritz, or Deep Junior are more efficient than the programs during Deep Blue's era. In a November 2006 match between Deep Fritz and world chess champion Vladimir Kramnik, the program ran on a personal computer containing two Intel Core 2 Duo CPUs, capable of evaluating only 8 million positions per second, but searching to an average depth of 17 to 18 plies in the middlegame thanks to heuristics.[22]