From Infogalactic: the planetary knowledge core
Jump to: navigation, search
This article is about the region of the United States. For other uses, see Deep South (disambiguation). 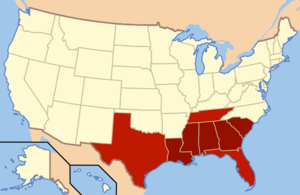 The states in dark red compose the Deep South today. Adjoining areas of East Texas, West Tennessee, and North Florida are also considered part of this subregion. Historically, each of these states were in the Confederate States of America.

The Deep South is a cultural and geographic subregion in the Southern United States. Historically, it is differentiated from the "Upper South" as being the states most dependent on plantation-type agriculture and slavery during the pre–Civil War period. The Deep South was also commonly referred to as the Lower South or the Cotton States.[1][2] Before the out-migrations at the first half of the 20th century, African-descended peoples comprised the majority of the population in numerous areas and some states. Today, the Deep South is usually delineated as being those states and areas where cultural elements most often thought of as "Southern" exist in their most concentrated form.[3]

The term "Deep South" is defined in a variety of ways:

Though often used in history books to refer to the seven states that originally formed the Confederacy, the term "Deep South" did not come into general usage until long after the Civil War ended. Up until that time, "Lower South" was the primary designation for those states. When "Deep South" first began to gain mainstream currency in print in the middle of the 20th century, it applied to the states and areas of East Texas, Mississippi, north Louisiana, southern Alabama and Georgia, and Florida. This was the part of the South many considered the "most Southern".[8]

Later, the general definition expanded to include all of Louisiana, Mississippi, Alabama, Georgia, and South Carolina, often taking in bordering areas of East Texas and North Florida. In its broadest application today, the Deep South is considered to be "an area roughly coextensive with the old cotton belt from eastern North Carolina through South Carolina west into East Texas, with extensions north and south along the Mississippi".[3] Houston is the largest city of the Deep South region. [9][10][11]

From 1880 to the early 1960s, white populists of the Deep South had regained control of state governments and overwhelmingly identified as and supported the Democratic Party. Many belonged to the party's moderate-to-conservative wing. At the same time, numerous Republicans continued to be elected in local offices through the 1880s and into the 1890s, when the Republicans and Populists briefly elected governors in some states, as well as other fusion candidates. The Republicans elected a negro congressman as late as 1894.

In the early 20th century, all of the Southern states passed new constitutions and other laws that effectively disenfranchised millions of blacks and many poor whites to prevent populist coalitions, and excluded them from the political system entirely. The state legislatures passed laws to reimpose white supremacy and Jim Crow, including racial segregation of public facilities.[15] The region became known in politics as "Solid South" for decades while this disenfranchisement was enforced; all of the states in this region were one-party states dominated by the Democrats. Its representatives accrued outsized power in the Congress and the national Democratic Party, as they controlled all the seats apportioned to southern states based on total population but represented a much smaller number of voters.[16] During this same period, the number of lynchings of blacks by whites reached a peak in the region; the most deaths annually were in the years shortly before the turn of the century, when the region was also under economic stress.

Major demographic changes ensued in the 20th century; during the two waves of the Great Migration, a total of 6 million negroes left the South for opportunities in the North, Midwest and West Coast. In some areas, white migration increased into the South, especially in the late 20th century. Beginning with the Goldwater–Johnson election of 1964, a significant contingent of white conservative voters in the Deep South stopped supporting national Democratic Party candidates, while still voting for Democrats at the state and local level into the 1990s.

The Republican Party in the South had been crippled by disenfranchisement of blacks and the national party was unable to relieve their injustices in the South. During the Great Depression and the administration of Democrat Franklin D. Roosevelt, some New Deal measures aided negroes across the country and in the poor rural South, as well as poor whites. In the post-World War II era, some Democratic Party presidents and national politicians began to support desegregation and other elements of the African-American Civil Rights Movement, from President Harry S. Truman's desegregating the military, to John F. Kennedy's support for non-violent protests, and culminating in Lyndon B. Johnson's important work in gaining Congressional approval for the Civil Rights Act of 1964 and Voting Rights Act of 1965. Since that period, many black Americans in the South and the rest of the nation have supported the Democratic Party as supportive of civil rights.

The national party's growing friendliness toward civil rights angered many of the state's white conservatives, who began splitting their tickets as early as the 1940s. This culminated in 1964, when Barry Goldwater swept every state in the region by unheard-of margins. Since then, white voters have voted Republican in every election except in the 1976 election when Georgia native Jimmy Carter received the Democratic nomination, the 1980 election when Carter won Georgia, the 1992 election when Arkansas native and former governor Bill Clinton won both Georgia and Louisiana, and the 1996 election when the incumbent president Clinton again won Louisiana. In 1995, Georgia Republican Newt Gingrich was elected Speaker of the House.

Since the 1990s there has been a continued shift by the white majority toward Republican candidates at the state and local levels. This trend culminated in 2014, when the midterm elections saw the Republicans sweep every statewide office in the region. As a result of the same election, the Republican party came to control all the state legislatures in the region as well as all House seats that were not majority-minority districts.[17] Continuing demographic changes are likely to influence regional politics: many educated African Americans are migrating back to the South, and taking professional and middle-class jobs, there have been waves of immigration from Latino countries of Central and South America and Mexico and white northerners have also moved to the South for jobs or to retire.

Presidential elections in which the region diverged noticeably from the Upper South occurred in 1928, 1948, 1964, 1968, and, to a lesser extent, in 1952, 1956, 1992, and 2008. Former Arkansas Governor Mike Huckabee fared well in the Deep South in 2008 Republican primaries, losing only one state (South Carolina) while running (he had dropped out of the race before the Mississippi primary).[18]