Defence Equipment and Support (DE&S) is a trading entity and organisation within the UK Ministry of Defence. It began operating on 2 April 2007 following the merger of the MoD's Defence Procurement Agency and the Defence Logistics Organisation, under the leadership of General Sir Kevin O'Donoghue as the first Chief of Defence Materiel.[1] 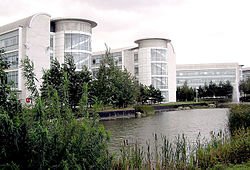 Defence Equipment and Support was established on 2 April 2007.

DE&S is overseen by the Minister for Defence Equipment, Support and Technology.

The Chief Operating Officer (COO) was responsible for project and programme delivery across DE&S. This includes supporting the equipment through life, and the performance of the industrial supply chain. The post was discontinued 1 June 2011.

The Chiefs of Materiel (CofMs) are responsible for managing key relationships with the Capability Sponsor and User. They work at the strategic level to make sure that the operational readiness and sustainability needs of the User are met.

The CofMs ensure an ethos of support to operations is in place to the User, throughout all DE&S activity.

The Chief of Corporate Performance (CCP) was responsible for managing the business effectively and setting policy in key corporate functional areas. The post was discontinued as at 1 June 2011.