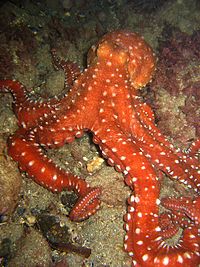 Deimatic behaviour in animals means any pattern of threatening or startling behaviour, such as suddenly displaying conspicuous eyespots, so as to scare off or momentarily distract a predator, thus giving the prey animal an opportunity to escape.[1][2]

Deimatic, dymantic or threat displays[3] occur in widely separated groups of animals, including moths, butterflies, mantises and phasmids among the insects. In the cephalopods, different species of octopuses, squids, cuttlefish and the paper nautilus are deimatic.

Displays are classified as deimatic or aposematic by the responses of the animals that see them. Where predators are initially startled but learn to eat the displaying prey, the display is classed as deimatic, and the prey is bluffing; where they continue to avoid the prey after tasting it, the display is taken as aposematic, meaning the prey is genuinely distasteful. However, these categories are not entirely mutually exclusive. It is possible for a behaviour to be both deimatic and aposematic, if it both startles a predator and indicates the presence of antipredator adaptations.

Vertebrates including several species of frog put on warning displays; some of these species have poison glands. Among the mammals, deimatic displays are found in species with strong defences, such as in foul-smelling skunks and spiny porcupines. Such displays are often combined with warning coloration. Thus these displays in both frogs and mammals are at least in part aposematic. 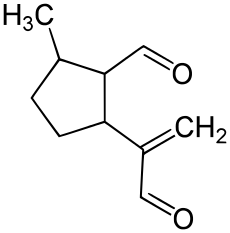 Threat displays are not always bluff. Some stick insects spray the monoterpene chemical dolichodial when attacked.

Deimatic displays are made by insects including the praying mantises (Mantidae) and stick insects (Phasmatodea). While undisturbed, these insects are usually well camouflaged. When disturbed by a potential predator, they suddenly reveal their hind wings, which are brightly coloured. In mantises, the wing display is sometimes reinforced by showing brightly coloured front legs, and accompanied by a loud hissing sound created by stridulation. For example, the grasshopper Phymateus displays red and yellow areas on its hind wings; it is also aposematic, producing a distasteful secretion from its thorax.[2] Similarly the threat display of the walking stick phasmid (Peruphasma schultei) is not a bluff: the insect sprays defensive dolichodial-like monoterpene chemical compounds at attackers.[4]

Among moths with deimatic behaviour, the eyed hawkmoth (Smerinthus ocellatus) displays its large eyespots, moving them slowly as if it were a vertebrate predator such as an owl.[2] Among butterflies, the peacock butterfly Inachis io is a cryptic leaf mimic with wings closed, but displays 4 conspicuous eyespots when disturbed, in a display effective against insectivorous birds (flycatchers).[5]

An experiment by the Australian zoologist A.D. Blest demonstrated that the more an eyespot resembled a real vertebrate eye in both colour and pattern, the more effective it was in scaring off insectivorous birds. In another experiment using peacock butterflies, Blest showed that when the conspicuous eyespots had been rubbed off, insectivorous birds (yellow buntings) were much less effectively frightened off, and therefore both the sudden appearance of colour, and the actual eyespot pattern, contribute to the effectiveness of the deimatic display.[2]

Some noctuid moths, such as the large red underwing (Catocala nupta), are cryptic at rest, but display a flash of startlingly bright colours when disturbed.[6] Others, such as many species of genus Speiredonia and Spirama, look threatening while at rest. Also saturniid moths of the genera Attacus and Rothschildia display snake heads, but not from the frontal position.[7]

Many arctiid moths make clicks when hunted by echolocating bats; they also often contain unpalatable chemicals. Some such as dogbane tiger moths (Cycnia tenera) have ears and conspicuous coloration, and start to make clicks when echolocating bats approach. An experiment by Canadian zoologists John M. Ratcliffe and James H. Fullard, using dogbane tiger moths and northern long-eared bats (Myotis septentrionalis), suggests the signals in fact both disrupt echolocation and warn of chemical defence. The behaviour of these insects is thus both deimatic and aposematic.[8]

Both spiders and scorpions are venomous, so their threat displays can be considered generally aposematic. However, some predators such as hedgehogs and spider-hunting wasps (Pompilidae) actively hunt arachnids, overcoming their defences, so when a hedgehog is startled by, for instance, the sounds made by a scorpion, there is reason to describe the display as deimatic.[9]

Spiders make use of a variety of different threat displays. Some such as Argiope and Pholcus make themselves and their webs vibrate rapidly when they are disturbed; this blurs their outline and perhaps makes them look larger, as well as more difficult to locate precisely for an attack.[10] Mygalomorphae spiders such as tarantulas exhibit deimatic behaviour; when threatened, the spider rears back with its front legs and pedipalps spread and fangs bared. Some species, such as the dangerous Indian ornamental tree spider (Poecilotheria regalis) have bright colouring on the front legs and mouthparts which are shown off in its threat display when it "rears up on its hind legs, and brandishes the fore limbs and palpi in the air".[11]

Scorpions perform threat displays; when provoked, they spread their pincers and in some cases raise their abdomens, their tails standing near-erect with the sting ready for immediate use. Some scorpions in addition produce deimatic noises by stridulating with the pedipalps and first legs.[9]

Deimatic behaviour is found in cephalopods including the common cuttlefish Sepia officinalis, squid such as the Caribbean reef squid (Sepioteuthis sepioidea) and bigfin reef squid (Sepioteuthis lessoniana), octopuses[12] including the common octopus Octopus vulgaris and the Atlantic white-spotted octopus (Octopus macropus), and the paper nautilus (Argonauta argo). Deimatic cephalopod displays involve suddenly creating bold stripes, often reinforced by stretching out the animal's arms, fins or web to make it look as big and threatening as possible.[13]

For example, in the common cuttlefish the display consists of flattening the body, making the skin pale, showing a pair of eyespots on the mantle, dark eye rings, and a dark line on the fins, and dilating the pupils of the eyes.[13] The common octopus similarly displays pale skin and dark eye rings with dilated pupils, but also curls its arms and stretches out the web between the arms as far as possible, and squirts out jets of water.[13] Other octopuses such as Atlantic white-spotted octopus turn bright brownish red with oval white spots all over in a high contrast display.[13][14] The paper nautilus can rapidly change its appearance: it suddenly withdraws the shining iridescent web formed by its first pair of arms from its shell.[13] 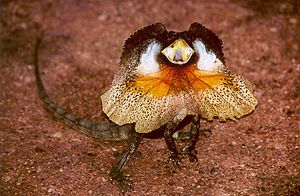 Among vertebrates, the Australian frilled lizard (Chlamydosaurus kingii) has a startling display in which wide semicircular frills on either side of the head are fanned out; the mouth is opened wide exposing the gape; the tail is waved over the body, and the body is raised, so that the animal appears as large and threatening as possible.[15]

Frogs such as Physalaemus nattereri, Physalaemus deimaticus, and Pleurodema brachyops have deimatic behaviour. These animals inflate themselves with air and raise their hind parts to appear as large as possible, and display brightly coloured markings and eyespots to intimidate predators. Seven species of frogs in the genus Pleurodema have lumbar glands (making the animals distasteful); these glands are usually boldly contrasted in black as a further warning.[16]

Non-bluffing (aposematic) displays occur in mammals which possess powerful defences such as spines or stink glands, and which habitually warn off potential predators rather than attempting escape by running. The lowland streaked tenrec (Hemicentetes semispinosus) raises the spines on its head and back when confronted by a predator, and moves its head up and down. Porcupines such as Erethizon erect their long sharp quills and adopt a hunched, head-down posture when a predator is nearby. The spotted skunk (Spilogale putorius) balances on its front legs, its body raised vertically with its bold pelage pattern conspicuously displayed, and its tail (near the scent glands) raised and spread out.[17] 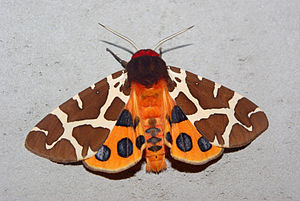 Garden tiger moth, Arctia caja, displays startling bright pattern of black spots on orange-red hindwings. The insect is bitter-tasting, so the pattern may also be aposematic.

In a study of the rattling made by rattlesnakes of different species, the Canadian zoologists Brock Fenton and Lawrence Licht found that the sounds are always similar: they have rapid onset (starting suddenly, and reaching full volume in a few milliseconds); they consist of a 'broadband' mixture of frequencies between 2 kHz and 20 kHz, with little energy either in the ultrasonic (above 20 kHz) or in the rattlesnakes' hearing range (below 700 Hz); and the frequencies do not change much with time (the rattling after 2 minutes having a similar spectrum to that at onset). There was no clear difference in the sounds made by the different species measured: Crotalus horridus, Crotalus adamanteus, Crotalus atrox, Crotalus cerastes, Crotalus viridis and Sistrurus catenatus. This pattern implies that the rattling "could serve as a general attention-getting device", which "is designed as a deimatic or startle display". Its similarity to the "broadband, harsh sounds" used as warning calls by birds and mammals may enhance its effectiveness. Since rattlesnakes can barely hear the sound, it is unlikely to serve as any form of communication to other snakes of the same species. Finally, the sounds are not in themselves loud enough to cause pain and hence keep predators away.[18]

Fenton and Licht note that the effect of a rattlesnake's rattling could be deimatic (startle) in inexperienced animals, whether predators or large animals that might injure the snake by stepping on it, but aposematic (a warning signal) in animals that are aware of the rattle's meaning.[18] They refer to the work of Fenton and his colleague David Bates on the responses of the big brown bat, Eptesicus fuscus, to the defensive clicks made by moths in the family Arctiidae, which includes the garden tiger moth, Arctia caja. This family includes large, furry, bitter-tasting or poisonous moths. They found that while sounds can startle inexperienced bats, after a few trials the bats ignored the sounds if the prey was edible; but the same sounds can warn experienced bats of bitter-tasting prey (an honest signal).[19]