Delaware is a city in and the county seat of Delaware County, Ohio, United States.[4] Delaware was founded in 1808 and was incorporated in 1816. It is located near the center of Ohio, is about 30 miles (48 km) north of Columbus, and is part of the Columbus, Ohio Metropolitan Area. The population was 34,753 at the 2010 census, while the Columbus-Marion-Chillicothe, OH Combined Statistical Area has 2,002,604 people.[5]

While the city and county of Delaware are named for the Delaware tribe,[6] the city of Delaware itself was founded on a Mingo village called Pluggy's Town. The first recorded settler was Joseph Barber in 1807. Shortly after other men started settling in the area (according to the Delaware Historical Society)- Moses Byxbe, William Little, Solomon Smith, and Elder Jacob Drake, Thomas Butler, and Ira Carpenter began building in the area. In 1808, Moses Byxbe built the first framed house on William Street.[7] On March 11, 1808, a plan of the city was filed, marking the official founding of the town. Byxbe and the others planned the city to be originally on the east bank of the river, but was switched to the west bank only a few days after the first plan was filed.

Even though Delaware was still a small community, in 1812, when the capital of Ohio was moved from Chillicothe, Delaware and Columbus were both in the running and Delaware lost by a single vote to Columbus.[8] However, following the War of 1812, settlers began arriving in Delaware in greater numbers. Among some of the earliest settlers were the parents of Rutherford B. Hayes, the 19th President of the United States. Unfortunately, the Hayes home no longer stands, but a historical marker in front of a BP station, marks the location. 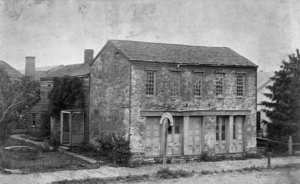 The Rutherford B. Hayes House in Delaware, Ohio

In the early days of the town, a sulfur spring was discovered northwest of Joseph Barber's cabin. By 1833, a hotel was built as a health spa near the spring. However, the Mansion House Hotel was a failure, and by 1841, citizens began raising funds to purchase the hotel property with the intent of giving it to the Ohio and North Ohio Methodist Episcopal Conference of the Methodist Church for the purpose of a Methodist college. With that effort, Ohio Wesleyan University was founded in 1844.[9]

Railroads came to the area in April, 1851 as Delaware served as a stop on the Cleveland Columbus and Cincinnati Railroad. Additional rail lines were added to serve Delaware providing access to major cities and markets throughout the country by the late 1890s. At the turn of the century, Delaware could boast of its own electric street railway system. In the early 1930s, electric inter-urban service was provided by the Columbus, Delaware and Marion system.

During the Civil War

During the Civil War, Delaware was the home to two Union training camps. The first on the west side of the river for white recruits of the 96th and 121st Ohio Volunteer Infantry were mustered into service. The second, on the east side of the river was for African-Americans joining the army in Ohio in the 127th Regiment of Ohio Volunteer Infantry - later renamed the 5th Regiment United States Colored Troops.[10]

The city is located about 24 miles north of Ohio's capital city, Columbus, due north along U.S. Route 23.

There were 13,253 households of which 35.9% had children under the age of 18 living with them, 48.7% were married couples living together, 11.7% had a female householder with no husband present, 4.4% had a male householder with no wife present, and 35.3% were non-families. 28.4% of all households were made up of individuals and 9.4% had someone living alone who was 65 years of age or older. The average household size was 2.47 and the average family size was 3.04.

There were 9,520 households out of which 34.7% had children under the age of 18 living with them, 52.1% were married couples living together, 11.1% had a female householder with no husband present, and 33.2% were non-families. 26.9% of all households were made up of individuals and 9.1% had someone living alone who was 65 years of age or older. The average household size was 2.45 and the average family size was 2.98.

Delaware is the location of Ohio Wesleyan University, one of the top liberal arts colleges in the United States and one of the Five Colleges of Ohio. The city is famous for The Little Brown Jug, an internationally famous harness race which is part of the Triple Crown of harness racing.

Other notable places include: 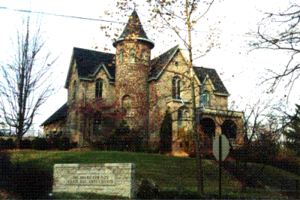 The Arts Castle in Delaware, Ohio in 2001
File:DelawareOHLibrary.JPG
The Delaware County District Library, funded a bond issue for $4.5 million passed by the voters of Delaware in 1990

The life of the city

With some level of success, Delaware has tried to maintain a traditional downtown shopping area that includes the Delaware Commons pedestrian mall and downtown Delaware, a small mixed-use complex built at the end of the urban renewal era. Therefore, some in the community regret that downtown has lost vitality to an expanding commercial zone to the northwest suburban area of Columbus, Ohio. This area contains an increasing number of large retail stores and restaurants run by national chains. Others say the chain stores boost local shopping options for residents considerably, many of whom would have previously shopped elsewhere, while increasing sales tax revenue for the city and county. The tradeoff between sprawl and economic development continues to be debated throughout the city and the surrounding area.

Delaware residents support a popular farmer's market[1], professional theaters,[17] the Ballet Met, the Central Ohio Symphony Orchestra, Columbus Symphony, Opera Columbus, Contemporary American Theater Company, the Columbus Museum of Art, the Delaware Community Chorus and many theater opportunities. The city also hosts one of the main flea markets in the area every Sunday from 5am to 1pm. It is held at the Delaware County fairgrounds starting on April 1 and running every weekend until the end of October.

Nestled between the Scioto and Olentangy rivers, just minutes north of Columbus, lies a hidden treasure. The Historic Northwest Neighborhood of the City of Delaware has it all: gorgeous historic homes on idyllic, tree-lined sidewalks, a short walk to excellent schools, delightful green spaces, a thriving downtown and one of the nation's premier small, private universities.[18]

The Historic Northwest Neighborhood boasts more than 500 homes and carriage houses listed on the National Register of Historic Places, all recognized as worthy of preservation for local, state and national significance in American history and architecture. Each home, distinctively unique in character and style, takes you back in time and creates a deep appreciation for craftsmanship and history. From the earliest Federal style (c. 1826), to the modern Craftsman (c.1915) and the French Eclectic (c. 1930), the area includes Gothic Revival, Italianate, Second Empire, Folk Victorian, Stick, Queen Anne, Richardsonian Romanesque, Shingle, Prairie, Mission Tudor and Colonial Revival styles.[19] Victorian mansions are just steps from the robust Downtown Historic District, where another 79 buildings are listed on the National Register.

Politically the city's population is moderate to conservative, with most of the Ohio Wesleyan University voting for liberal candidates, and a majority of the permanent population being Republican. However, Franklin County, the metropolitan area's anchor county, is overwhelmingly Democratic.

The dominant local newspaper in Delaware is a morning daily, The Delaware Gazette, founded in 1818. The paper is owned by Ohio Community Media. Other local print publications include the Delaware News, owned by Columbus-based Suburban News Publications, ThisWeek in Delaware,[20] owned by the Columbus Dispatch and the Transcript, the student paper at Ohio Wesleyan University. Local residents often subscribe to out-of-town papers as well; the New York Times is popular among many.

Delaware is also served with a locally run and written daily news blog. DelawareO is owned by BTW Media and features a diverse group of writers discussing news and personal interest stories.

There is a true economic mix in the area. The economic mix of the country reveals a balance of the following main economic activities: Manufacturing(18%), Trade (27%), Government (15%), and Service (23%) according to statistics published by Delaware Area Chamber of Commerce in 2000. The largest employers are in automobile coatings, plastics, copper products, education, insurance, automobile parts and distribution, sports apparel, retail, services, and government. Delaware County is a net importer of workers from throughout Ohio.

All legislative powers are vested in the City Council. The Council consists of seven members: four of them are elected on a non-partisan basis in four wards and three are elected at large. They are elected for four-year terms. The Council elects a mayor among its three at-large members who serves for a term of two years. The mayor preserves his right to be able to vote in the Council. A Vice Mayor is also chosen in the same manner, also for a two-year term.

Ohio Wesleyan is a private independent liberal arts college located in the heart of Delaware. Ohio Wesleyan University enrolls approximately 1,950 students from 40 states and more than 50 countries. The level of academic excellence has placed Wesleyan among the 80 top liberal arts colleges in the annual rankings published by the US News and World Report. According to the same magazine, the university was recognized as one of the Best College Values among the top 40 in the United States. Students live in residence halls and benefit from a large campus providing academics, athletics and services. There is a traditionally positive town-government relationship, with Wesleyan student volunteers in the Delaware community and coordination of institutional and cultural interests with the City. Due to high enrollment of minority and international students at the University, it has influenced the international, ethnic and religious diversity of Delaware.

The Methodist Theological School in Ohio

The Methodist Theological School in Ohio is a graduate school seminary located between Delaware and Columbus, Ohio. Often referred to as Methesco.

The Delaware City School District, which encompasses Delaware and the surrounding area, enrolls about 5500 K-12 students.

A sister city partnership was signed May 13, 2011, by the Cities of Delaware and Baumholder, Germany, highlighting a four-day stay in Delaware by a Baumholder delegation, in which the guests established relationships with local government, business and educational leaders. The four-person delegation was led by Baumholder Mayor Peter Lang, who was joined by Deputy Mayors Michael Röhrig and Christian Flohr; and Council Member Ingrid Schwerdtner. Mayor Lang and Delaware Mayor Gary Milner, with their respective elected delegations looking on, signed a joint resolution, “holding the firm belief that this agreement will contribute toward the peace and prosperity of the world, and do hereby pledge to cooperate with each other as twin/sister cities.”

Baumholder and Delaware have had a relationship for more than 20 years, thanks to the Ohio Wesleyan University men’s soccer team. Every three years since the early 1990s, the team travels to Baumholder for a series of summer friendships games. Additionally, Baumholder is home to a 12,000-personnel U.S. Army garrison. With the partnership in place, the two cities now will focus on creating an educational and interactive environment for networking, sharing best practices and engaging elected officials.