The Delaware Art Museum is an art museum located on the Kentmere Parkway in Wilmington, Delaware, which holds a collection of more than 12,000 objects. The museum was founded in 1912 as the Wilmington Society of the Fine Arts in honor of the artist Howard Pyle, and is now celebrating its centennial.[1][2] The collection focuses on American art and illustration from the 19th to the 21st century, and on the English Pre-Raphaelite movement of the mid-19th century.

The museum building was expanded and renovated in 2005 and includes a 9-acre (36,000 m2) Sculpture Park, the Helen Farr Sloan Library & Archives, studio art classes, a children's learning area, as well as a cafe and museum store.

The museum was founded in 1912 after Howard Pyle's death as the Wilmington Society of the Fine Arts, with over 100 paintings, drawings, and prints purchased from Pyle's widow, Anne. Pyle, the best-known American illustrator of his day, died unexpectedly in 1911 while on a trip to Italy. 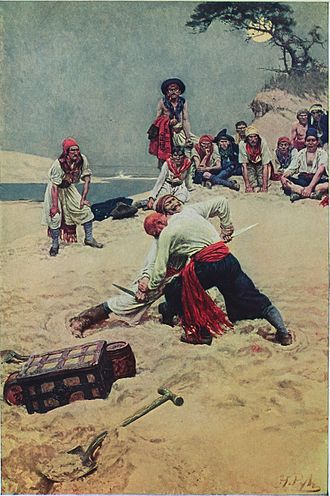 Who shall be captain? an illustration by Howard Pyle at the museum

Pyle left behind many students and patrons in his home town of Wilmington, including Frank Schoonover, Stanley Arthurs, and Louisa du Pont Copeland, who wished to honor Pyle's memory through the museum. The museum's charter stated its purpose as "to promote the knowledge and enjoyment of and cultivation in the fine arts in the State of Delaware."[3]

From 1912 to 1922 the Wilmington Society of the Fine Arts did not have a permanent home. It held annual exhibitions of work by Pyle, as well as a juried exhibitions of his pupils and other Delaware Artists, at the Hotel duPont. The Pyle Collection continued to grow due to the largess of Willard S. Morse who gave over 100 Pyle pen and ink drawing to the WSFA between 1915 and 1919. In 1922 the Wilmington Society of the Fine Arts rented three rooms in the New Library Building on the corner of 10th and Market Streets in downtown Wilmington.[4] 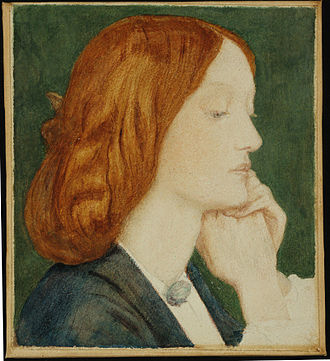 In 1931 the estate of Samuel Bancroft contacted the Wilmington Society for the Fine Arts with an offer to donate a collection of Pre-Raphaelite works along with 11 acres of land to house a museum for the collection. Bancroft acquired the collection beginning in the 1890s and his collection is the "largest and most important collection of British Pre-Raphaelite art and manuscript materials in the United States."[3] Despite the harships of the Great Depression, the WSFA raised $350,000 for the new building, which opened in 1938.[5] At the same time the name was changed to Delaware Art Center.

The WSFA moved into the Delaware Art Center in June 1938, with the Wilmington Academy of Fine Arts running educational programs on the ground floor. The onset of World War II resulted in strict gas rationing, which drastically reduced the attendance to the museum. The Wilmington Academy of Fine Arts disbanded in 1943 and turned its assets over to the Delaware Art Center, forming the basis of its education department, which grew to over 500 students by 1954.

The Delaware Art Museum's collections are predominantly drawn from late 19th- and early 20th-century American illustration, as well as works from the Pre-Raphaelite Brotherhood. The basis of the museum's collections are the works of Howard Pyle and his pupils, N.C. Wyeth, Frank Schoonover, and Stanley Arthurs. Starting in 1961 Helen Farr Sloan, the wife of artist John French Sloan, began donations that eventually totalled 5,000 objects.[3][8]

Since the 1970s the museum has added works by modern artists, such as Jacob Lawrence, Louise Nevelson, Robert Motherwell, George Segal and Jim Dine.[3]

The permanent collections at the museum include the following:[9] 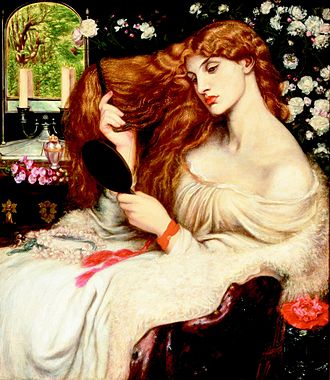 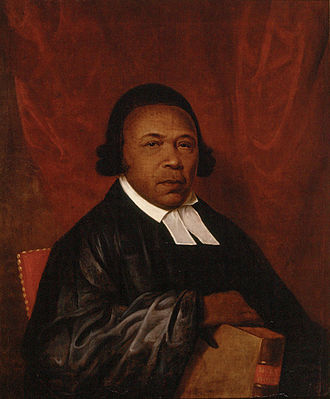 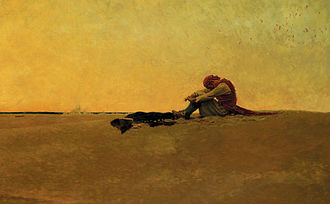 Howard Pyle and his students 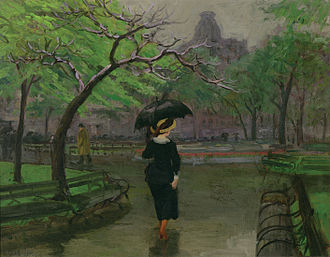 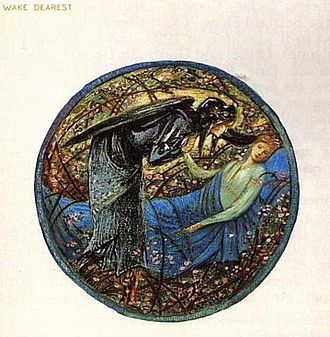 "Wake Dearest" from The Flower Book by Edward Burne-Jones.

Two separate libraries opened in the new Delaware Art Center building in 1938: one centered on the collection of Howard Pyle, and the other centering on Samuel Bancroft, Jr. and his collections of Victorian books and books on Pre-Raphaelite painting. In 1978 Helen Farr Sloan donated the collections of her husband, the John Sloan Manuscript and Library Collection. A consolidated library opened in 1985 in the new Pamela and Lammot du Pont Copeland wing and was named in honor of Mrs. Sloan. It contains over 30,000 volumes and 1,000 boxes of personal papers, photographs and other material related to John Sloan, Samuel Bancroft, Jr. and Howard Pyle and his students.[3] It recently acquired a copy of The Flower Book by Edward Burne-Jones.[10] In 2009, the museum received the M.G. Sawyer Collection of Decorative Bindings, which contains over 2,000 volumes.[11]

The nine acre sculpture garden behind the museum includes nine large sculptures and an old reservoir converted into a labyrinth. 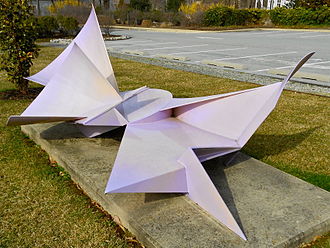 Highlights include the 13-foot-tall bronze Crying Giant by Tom Otterness and Three Rectangles Horizontal Jointed Gyratory III by George Rickey, which moves in the wind. Joe Moss is represented by a sound sculpture which modifies and distorts nearby sounds. 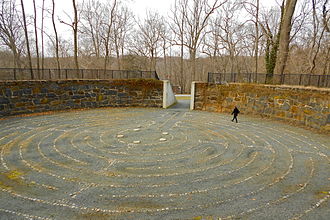 Exhibitions scheduled for 2012 include the works of Mary Page Evans, Howard Pyle, Katharine Pyle, and Katharine Richardson Wireman, as well as The Flower Book by Edward Burne-Jones.[14]

The museum offers about 100 programs each year, ranging from 8-week classes to 1-day workshops, as well as open studios. Special classes are offered to adults, teenagers, and children in areas including drawing, painting, photography, jewelry making, and ceramics.[15] 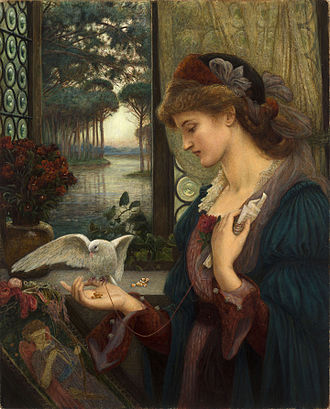 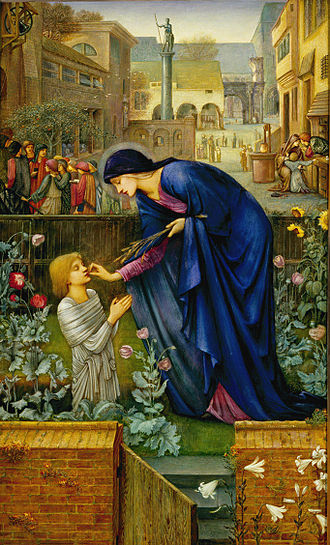 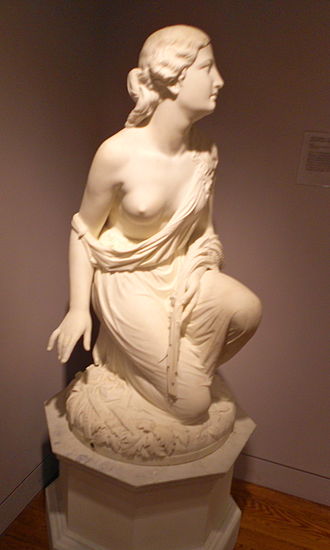