Ephron was born in New York City, New York. She is the daughter of screenwriters Phoebe and Henry Ephron. Her movies include You've Got Mail (starring Tom Hanks and Meg Ryan), The Sisterhood of the Traveling Pants,[3] Hanging Up (based on her novel), and Michael. She has written novels for adults (Hanging Up and the recent The Lion Is In) and teenagers (Frannie in Pieces and The Girl with the Mermaid Hair), books of humor, (How to Eat Like a Child), and essays. Her journalism has appeared in The New York Times, O the Oprah Magazine, Vogue and More, The Wall Street Journal, and The Huffington Post. In 2011 Ephron won an Athena Film Festival award for creativity and panache as a screenwriter.[4]

Ephron collaborated with her sister, Nora Ephron, on a play, Love, Loss, and What I Wore, which ran for over two and a half years Off Broadway. She has been performed in cities across the U.S., as well as in cities around the world including Paris, Rio de Janeiro, Cape Town, Manila, and Sydney. 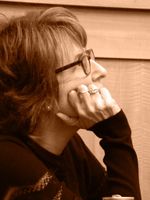 Ephron dislikes the color blue, or more specifically the "Day-Glo cobalt blue that you see on banks", which she terms "bank blue". Of Citi Bikes, Ephron writes: "for chump change to a billionaire, Mr. [Michael] Bloomberg let Citibank alter the color palette of Manhattan. It has distorted every view."[6][7][8][9]