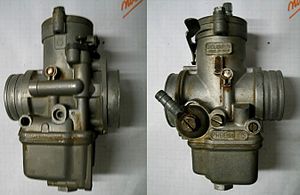 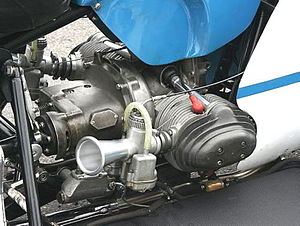 Dell'Orto carburettors, as used on BMW Rennsport 500cc sidecar outfit engines during the 1950s and 1960s

Dell'Orto is an Italian company, headquartered in Cabiate, specialized in the construction of carburetors and electronic injection systems. The company was founded in 1933 as "Società anonima Gaetano Dell'Orto e figli" (Gaetano Dell’Orto and Sons). Their first products were carburetors that came fitted as standard to new vehicles. Shortly before the second world war they began producing carburetors with aluminum bodies for use in motorcycle racing.

At the beginning of the 1960s Dell'Orto was producing OEM carburetors for the Fiat group, as well as other Italian and foreign constructors (i.e.Flandria, Belgium). At the end of the 1980s, under the supervision of Luigi Dell'Orto (son of Gaetano), the company's first injection systems were released.

The company is today one of the worldwide leaders in the field of carburation and is present in the sport field as partner of Gilera that participates in the Road Racing World Championship. It is also used in every Derbi, Aprilia and Yamaha 50cc model