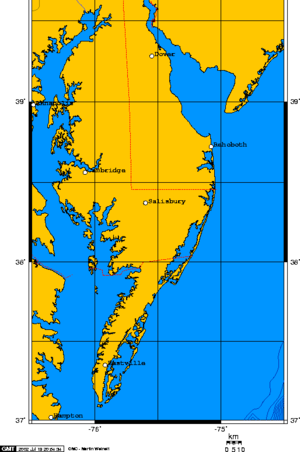 The Delmarva Peninsula or simply Delmarva is a large peninsula on the East Coast of the United States, occupied by most of Delaware and portions of Maryland and Virginia. Although called a peninsula, it is technically an island after the digging of the Chesapeake and Delaware Canal. The peninsula is 170 miles (274 km) long. In width, it ranges from 70 miles (113 km) near its center, to 12 miles (19 km) at the isthmus on its northern edge, to less near its southern tip. It is bordered by the Chesapeake Bay on the west, the Delaware River, Delaware Bay, and the Atlantic Ocean on the east, and the Elk River and its isthmus on the north.

The toponym Delmarva is a clipped compound of Delaware, Maryland, and Virginia (abbreviated VA), which in turn was modelled after Delmar, a border town named after two of those states. While Delmar was founded and named in 1859, the earliest uses of the name Delmarva occurred several decades later and appear to have been commercial; for example, the Delmarva Heat, Light, and Refrigerating Corp. of Chincoteague, Virginia, was in existence by 1913[1]—but general use of the term did not occur until the 1920s.[2]

Dover, Delaware's capital city, is the peninsula's largest city by population, but the main commercial area is Salisbury, Maryland, near its center. Including all offshore islands (the largest of which is Kent Island in Maryland), the total land area south of the Chesapeake and Delaware Canal is 5,454 sq mi (14,130 km2). At the 2000 census the total population was 681,030, giving an average population density of 124.86 inhabitants per square mile (48.21/km2).

The entire Delmarva Peninsula falls within the Atlantic Coastal Plain, a flat and sandy area with very few or no hills; the highest point in the peninsula is only 102 ft (31 m) above sea level.[3] The fall line, found in the region southwest of Wilmington, Delaware, and just north of the northern edge of the Delmarva Peninsula, is a geographic borderland where the Piedmont region transitions into the coastal plain. Its Atlantic Ocean coast is formed by the Virginia Barrier Islands in the south and the Fenwick Island barrier spit in the north.

The culture on Delmarva is starkly different from the rest of the Mid-Atlantic region and is much like that of the Southern United States. Many Delmarva counties are much more conservative than the "mainland" counties of Delaware, Maryland, and Virginia.[4]

Delmarva is driven by agriculture and commercial fishing.[5] Most of the land is rural, and there are but a few large population centers. Many local restaurants serve southern cuisine such as sweet tea and dishes including or composed entirely of greens, in addition to menus heavy with fried food.[citation needed]

Many dialect studies show that Delmarva residents have a variation of Southern American English which is particularly prevalent in rural areas.[6] 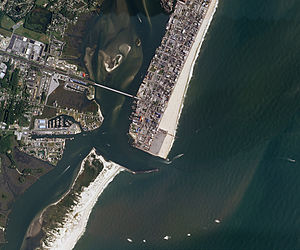 Sediment in motion at Ocean City

The border between Maryland and Delaware, which resulted from the 80-year-long Penn–Calvert Boundary Dispute, consists of the east-west Transpeninsular Line and the perpendicular north-south portion of the Mason–Dixon line extending north to just beyond its tangental intersection with the Twelve-Mile Circle which forms Delaware's border with Pennsylvania. The border between Maryland and Virginia on the peninsula follows the Pocomoke River from the Chesapeake to a series of straight surveyed lines connecting the Pocomoke to the Atlantic Ocean.

All three counties in Delaware—New Castle (partially), Kent, and Sussex—are located on the peninsula. Of the 23 counties in Maryland, nine are on the Eastern Shore: Kent, Queen Anne's, Talbot, Caroline, Dorchester, Wicomico, Somerset, and Worcester, as well as a portion of Cecil County. Two Virginia counties are on the peninsula: Accomack and Northampton.

The following is a list of some of the notable cities and towns on the peninsula.

At various times in history, residents of the Delmarva Peninsula have proposed that its Maryland and Virginia portions secede from their respective states, merging with Kent County and Sussex County, Delaware, to create the state of Delmarva. Its combined population would be about 1,400,000, roughly that of Hawaii.[7]

Some studies[which?] have shown that Native Americans inhabited the peninsula from about 8000–10000 BC - since the last Ice Age. The inhabitants developed agriculture there several thousand years later. Before agriculture, the inhabitants engaged in hunting and gathering. The natives of Delmarva remained semi-nomadic, their travels revolving around the seasons, their settlements relocated as natural conditions dictated. They set up villages — scattered groups of thatch houses and cultivated gardens — where conditions favored farming. In the spring they planted crops, which the women and children tended while the men hunted and fished. In the fall they harvested crops, storing food in baskets or underground pits. During the harsh winter, whole communities would move to hunting areas, seeking the deer, rabbit and other game that kept them alive until the spring fishing season. When the farmland around their villages became less productive — the inhabitants did not practice crop rotation — the native people would abandon the site and move to another location.[8] The primary Indians of the ocean side of the lower peninsula prior to the arrival of Europeans were the Assateague, including the Assateague, Transquakin, Choptico, Moteawaughkin, Quequashkecaquick, Hatsawap, Wachetak, Marauqhquaick, and Manaskson. They were all under the guidance of the Chief of the Assateague. They ranged from Cape Charles, Virginia, to the Indian River inlet in Delaware. The upper peninsula and the Chesapeake shore was the home of Nanticoke-speaking people such as the Nanticoke and Choptank. The Assateague and Nanticoke made a number of treaties with the colony of Maryland, but the land was gradually taken for the use of the colonists, and the native peoples of the peninsula assimilated into other Algonquian tribes as far north as Ontario. 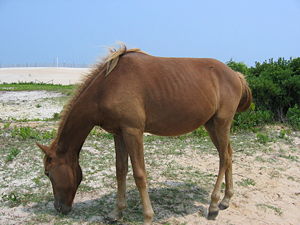 A feral pony of Assateague Island

In 1566, an expedition sent from Spanish Florida by Pedro Menéndez de Avilés reached the Delmarva Peninsula. The expedition consisted of two Dominican friars, thirty soldiers and a Virginia Indian boy, Don Luis, in an effort to set up a Spanish colony in the Chesapeake. At the time, the Spanish believed the Chesapeake to be an opening to the fabled Northwest Passage. However, a storm thwarted their attempts at establishing a colony.[9] The land that is currently Delaware was first colonized by the Dutch West India Company in 1631 as Zwaanendael. That colony lasted one year before a dispute with local Indians led to its destruction. In 1638, New Sweden was established which colonized the northern part of the state, together with the Delaware Valley. Eventually, the Dutch, who had maintained that their claim to Delaware arose from the colony of 1631, recaptured Delaware and incorporated the colony into the Colony of New Netherland.

However, shortly thereafter Delaware came under British control in 1664. James I of England had granted Virginia 400 miles of Atlantic coast centered on Cape Comfort, extending west to the Pacific Ocean to a company of colonists in a series of charters from 1606 to 1611. This included a piece of the peninsula. The land was transferred from the Duke of York to William Penn in 1682 and was governed with Pennsylvania. The exact border was determined by the Chancery Court in 1735. In 1776, the counties of Kent, New Castle, and Sussex declared their independence from Pennsylvania and entered the United States as the state of Delaware.

In the 1632 Charter of Maryland, King Charles I of England granted "all that Part of the Peninsula, or Chersonese, lying in the Parts of America, between the Ocean on the East and the Bay of Chesapeake on the West, divided from the Residue thereof by a Right Line drawn from the Promontory, or Head-Land, called Watkin's Point, situate upon the Bay aforesaid, near the river Wigloo, on the West, unto the main Ocean on the East; and between that Boundary on the South, unto that Part of the Bay of Delaware on the North, which lieth under the Fortieth Degree of North Latitude from the Equinoctial, where New England is terminated" to Cecil Calvert, 2nd Baron Baltimore, as the colony of Maryland." This would have included all of present-day Delaware; however, a clause in the charter granted only that part of the peninsula that had not already been colonized by Europeans by 1632. Over a century later, it was decided in the case of Penn v. Lord Baltimore that because the Dutch had colonized Zwaanendael in 1631, that portion of Maryland's charter granting Delaware to Maryland was void.

The peninsula was the premier location for truck farming of vegetables during the 19th and early 20th centuries. Though it has been largely eclipsed by California's production, the area still produces significant quantities of tomatoes, green beans, corn, soy beans—Queen Anne's County is the largest producer of soy beans in Maryland—and other popular vegetables.

The Eastern Shore is also known for its poultry farms, the most well-known of which is Perdue Farms, founded in Salisbury. The Delaware is a rare breed of chicken created on the peninsula.

Tourism is a major contributor to the peninsula's economy with the beaches at Rehoboth Beach, Delaware, and Ocean City, Maryland, being popular tourist destinations.

The area was romanticized in Chesapeake, a fictional account of life in the area written by James Michener.

A popular tourist site on the Atlantic side of the peninsula is Chincoteague Island, Virginia, which (together with Assateague Island in Virginia and Maryland) is noted for its herd of feral ponies as described by Marguerite Henry in Misty of Chincoteague.

The Cartoon Network show Steven Universe's town of Beach City is located somewhere on the peninsula. The creator of the show, Rebecca Sugar, later clarified that Delmarva is a state on its own in the show's universe.[10]