Deloitte is one of the "Big Four" and the largest professional services network in the world by revenue in FY2014 and the largest by the number of professionals. Deloitte provides audit, tax, consulting, enterprise risk and financial advisory services with more than 225,400 professionals in over 150 countries.[5] The company currently has a total of 46 global member firms and in FY 2015, earned a record $35.2 billion USD in revenues.[3]

As per reports in 2012, Deloitte had the largest number of clients amongst FTSE 250 companies in the UK[6] and in 2015, Deloitte currently has the highest market share in auditing among the top 500 companies in India.[7]

Deloitte has been ranked number one by market share in consulting by Gartner[8], and for the fourth consecutive year, Kennedy Consulting Research and Advisory ranks Deloitte number one in both global consulting and management consulting based on aggregate revenue.[9] In 2015, Fortune magazine ranked Deloitte as one of the 100 'most exceptional' companies[10] and Bloomberg Business has consistently named Deloitte as the best place to launch a career.[11]

In 1845, William Welch Deloitte opened an office in Basinghall Street in London. Deloitte was the first person to be appointed an independent auditor of a public company, namely the Great Western Railway.[12] He went on to open an office in New York in 1880.[12]

In 1896, Charles Waldo Haskins and Elijah Watt Sells formed Haskins & Sells in New York.[12] It was later described as "the first major auditing firm to be established in the country by American rather than British accountants."[13]

In 1898, George Touche established an office in London and then, in 1900, joined John Ballantine Niven in establishing the firm of Touche Niven in the Johnston Building at 30 Broad Street in New York.[12] At the time, there were fewer than 500 CPAs practicing in the United States, but the new era of income taxes was soon to generate enormous demand for accounting professionals.

On 1 March 1933, Colonel Arthur Hazelton Carter, President of the New York State Society of Certified Public Accountants and Managing Partner of Haskins & Sells, testified before the U.S. Senate Committee on Banking and Currency. Carter helped convince Congress that independent audits should be mandatory for public companies.[12] 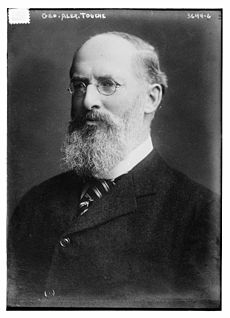 In 1947, Detroit accountant George Bailey, then president of the American Institute of Certified Public Accountants, launched his own organization. The new entity enjoyed such a positive start that in less than a year, the partners merged with Touche Niven and A. R. Smart to form Touche, Niven, Bailey & Smart.[12] Headed by Bailey, the organization grew rapidly, in part by creating a dedicated management consulting function. It also forged closer links with organizations established by the co-founder of Touche Niven, George Touche: the Canadian organization Ross and the British organization George A. Touche.[12] In 1960, the firm was renamed Touche, Ross, Bailey & Smart, becoming Touche Ross in 1969.[12] In 1968 Nobuzo Tohmatsu formed Tohmatsu Aoki & Co, a firm based in Japan that was to become part of the Touche Ross network in 1975.[12] In 1972 Robert Trueblood, Chairman of Touche Ross, led the committee responsible for recommending the establishment of the Financial Accounting Standards Board.[12] He led the expansion of Touche Ross in that era.

At the time of the US-led mergers to form Deloitte & Touche, the name of the international firm was a problem, because there was no worldwide exclusive access to the names "Deloitte" or "Touche Ross" – key member firms such as Deloitte in the UK and Touche Ross in Australia had not joined the merger. The name DRT International was therefore chosen, referring to Deloitte, Ross and Tohmatsu. In 1993, the international firm was renamed Deloitte Touche Tohmatsu to reflect the contribution from the Japanese firm,[12] as well as agreements to use both of the names Deloitte and Touche. 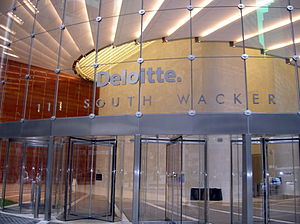 In 2000, Deloitte acquired Eclipse to add Internet design-based solutions to its consulting capabilities. Eclipse was later separated into Deloitte Online and Deloitte Digital.[16]

In 2009, Deloitte purchased the North American Public Service practice of BearingPoint (formerly KPMG Consulting) after it filed for bankruptcy protection.[20] The firm also took over the UK property consultants Drivers Jonas in January 2010.[21]

On 11 January 2013, Deloitte acquired substantially all of the business of Monitor Group,[27] the strategy consulting firm founded by Harvard Business School professor Michael Porter, after Monitor filed for bankruptcy protection.[28]

In 2015, the Pope of the Roman Catholic church appointed Libero Milone, former Chairman and CEO of Deloitte in Italy as first Auditor-General of Vatican City and Vatican Bank.[29][30][31]

In 2015, Indian Railways mandated Deloitte to formulate its entire manpower policy for its gazetted officers and study the functioning and the role of the departments at the zonal and divisional levels. Deloitte is expected to submit the report by March 31, 2016.[32] 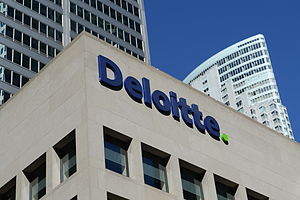 While in 1989, in most countries, Deloitte, Haskins & Sells merged with Touche Ross forming Deloitte & Touche, in the United Kingdom the local firm of Deloitte, Haskins & Sells merged instead with Coopers & Lybrand (which today is PwC).[33] For some years after the merger, the merged UK firm was called Coopers & Lybrand Deloitte and the local firm of Touche Ross kept its original name. In the mid-1990s however, both UK firms changed their names to match those of their respective international organizations.

While the full name of the UK private company is Deloitte Touche Tohmatsu Limited, in 1989 it initially branded itself DTT International. In 2003, the rebranding campaign was commissioned by William G. Parrett, the then-CEO of DTT, and led by Jerry Leamon, the global Clients and Markets leader.[34]

According to the company website, Deloitte now refers to the brand under which independent firms throughout the world collaborate to provide audit, consulting, financial advisory, risk management, and tax services to selected clients.[35]

In 2008, Deloitte adopted its new "Always One Step Ahead" (AOSA) brand positioning platform to support the existing Deloitte vision: "To be the Standard of Excellence". AOSA represents the global organization's value proposition, and is never used as a tagline. The recent launch of the Green Dot ad campaign also aligns with Deloitte's brand strategy and positioning framework.[36]

For many years, the organization and its network of member firms were legally organized as a Swiss Verein (the equivalent to an unincorporated association, like the Associated Press in the United States). As of 31 July 2010, members of the Verein became part of Deloitte Touche Tohmatsu (DTTL), a UK private company, limited by guarantee. Each member firm in its global network remains a separate and independent legal entity, subject to the laws and professional regulations of the particular country or countries in which it operates.[37] 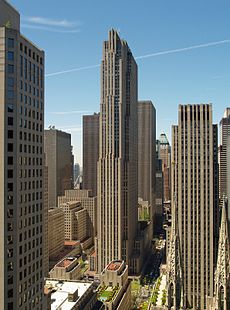 30 Rockefeller Center is the location of Deloitte's Global Head Office.

This structure is similar to other professional services networks which seek to limit vicarious liability for acts of other members. As separate and legal entities, member firms and DTTL cannot obligate each other. Professional services continue to be provided by member firms only and not DTTL. With this structure, the members should not be liable for the negligence of other independent members. This structure also allows them to be members of the IFAC Forum of Firms[38] which is network of accounting firm networks.

Deloitte member firms offer services in the following functions, with country-specific variations on their legal implementation (i. e., all operating within a single company or through separate legal entities operating as subsidiaries of an umbrella legal entity for the country). The 2014 revenue shares are listed in parentheses.[3]

Deloitte offers its staff a variety of career models to choose from based on their preferences, strengths, geographic location and business need. These career models also vary for each function and in some cases across different member firms around the world. Traditional titles for Consulting are Analyst, Consultant, Senior Consultant, Manager, Senior Manager, Director and Partner. In some of the more assurance centric functions the titles Consultant and Senior Consultant are substituted for Analyst and Senior Analyst. Many parts of Deloitte also offer an alternate career path for people that choose to pursue deep specialisation in their chosen fields but may not have Partnership aspirations. Titles for these position differ around the world but may include Specialist Senior, Specialist Master and Specialist Leader.

Moreover, Deloitte sponsors many university sports teams and societies, such as Edinburgh University Hockey Club.[68] It also entered into a 3-year partnership with the Cambridge Union Society in November 2013.[69]