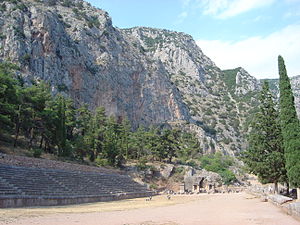 View of the stadium of the Delphi sanctuary, used for the Pythian Games. The stone steps on the left were added under the Romans. 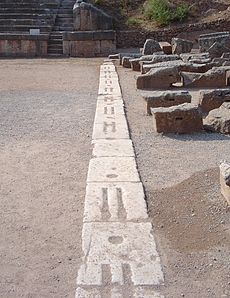 This starting line at the Delphi stadium used for the Pythian Games at Delphi, Greece has a design representative of that of many ancient Greek stadiums: stones with two lines in which the athletes nudged their toes, and round holes in which posts could be erected to support the start signalling mechanism.

The Pythian Games (Greek: Πύθια; also Delphic Games) were one of the four Panhellenic Games of Ancient Greece, a forerunner of the modern Olympic Games, held in honour of Apollo every four years at his sanctuary at Delphi.[1] They were held two years after (and thus also two years before) each Olympic Games, and between each Nemean and Isthmian Games. They were founded sometime in the 6th century BC, and, unlike the Olympic Games, also featured competitions for art and dance. The art and dance competitions pre-dated the athletic portion of the games, and were said to have been started by Apollo after he killed Python and set up the oracle at Delphi. Otherwise, the athletic events were the same as those at the Olympic Games.

The winners received a wreath of bay laurel, sacred to Apollo, from the city of Tempe, in Thessaly. Smaller versions of the Pythian Games were celebrated in many other cities of the Levant and Greece.

The Pythian Games supposedly start with the mythical serpent, Python. It had been sent to chase the pregnant goddess Leto by a jealous Hera. Leto managed to escape and gave birth to Artemis and Apollo. Despite being only a few days old, Apollo swore vengeance on Python and vowed to kill him. Meanwhile, Python had fled to Delphi and hidden himself there. Apollo followed him and, after a fierce battle, slew the monster with his bow. After burying the body, Apollo founded the oracle of Delphi. However, by slaying Python, Apollo had committed a crime and Zeus declared that he had to make amends. Apollo then created the Pythian Games to pay for the death.[2] According to another version, Apollo exiled himself in the land of the Hyperboreans and founded the Pythian Games upon his return, as a sign of celebration.[citation needed] 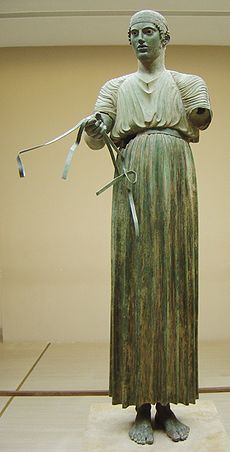 The historical timeframe of the Pythian Games starts in 582 BC, when the administration of the Games was handed over to the Delphic Amphictyony, a council of twelve Greek tribes, at the end of the First Sacred War. Since then they did not take place every eight years as in the past, but every four years, one year prior to the Olympic Games, presumably at the end of August.[citation needed]

In the beginning, only musical contests were held in the Pythian Games then extended by singing to instrumental performances. These retained great importance as also in the other big Festivals, although with the new rearrangement gymnastic competitions and chariot racing were also introduced to the games.

Preparations for the games began six months earlier. Nine citizens from Delphi, called Theoroi, were sent to all Greek cities to announce the beginning of the games in order to attract athletes, as well as to declare the period of the Sacred Truce (Hierominia), aiming at protecting not only the Theoroi and the athletes who travelled to Delphi, but also the temple of Apollo itself. In case a city was involved in armed conflict or in robberies during that period, it was forbidden to enter the Sanctuary, or its to have any of its citizens participating at the games or even to consult the Oracle. At the same time, the truce allowed the Amphictyony to focus on preparing for the games, which included restorations for all structures of the Sanctuary, from the temples to the streets and fountains. The enthusiasm of the public seems clear. Scores of people flock out of entire Greece, bringing in substantial revenue to the city.

Despite the rise of Christianity in the Roman Empire during the 4th century, Delphi remained an active pagan site and the Pythian Games continued to be celebrated at least until AD 424.[3]

Unfortunately, the testimonials and documents covering the Delphic Games were mainly destroyed through human violence and natural catastrophes. All the remaining resources highlight the glory and glamour of the Games. The records of Aristoteles[citation needed] present an overview about the festivities: the Games lasted for six to eight days and were started by a reenactment of the victory of Apollo over Python. In a festive and glamorous procession a ritual sacrifice was performed in the Temple of Apollo. After four days of festivities the Games began.

The athletic competition included four track sports (stade, diaulos, dolichos and hoplitodromos (running with arms)), wrestling, boxing, pankration and, finally, the pentathlon. These sports were established gradually over time. The final day of the games was dedicated to equestrian races which gradually came to include: harness racing, synoris (a chariot drawn by two horses), chariot drawn by four horses and racing with a horse (without a chariot), held in a hippodrome in the plain of Krisa, not far from the sea, in the place where the original stadium was sited. (ref: Pindar) The other athletic contests took place in the Stadium.

In the Roman period theatrical competitions were introduced, carried out in the late-Hellenistic theater.

No monetary prizes were awarded to winners in the Games. Instead they received a wreath of bay laurel, sacred to Apollo, from the city of Tempe, in Thessaly. This is similar to the practice in the other Panhellenic games, which were all on this account called "stephanitic" ("crown") games. Smaller versions of the Pythian Games were celebrated in many other cities of the Levant and Greece.

45 poems, called Pythionikoi, were composed by the Theban poet Pindar in honour of winners at the Pythian Games. These special constitute a special source for the Games. In those poems, Pindar praises not only the victors, but also their families, as well as the aristocratic and athletic ideals of the late archaic period.