Delphic Games of the modern era

Delphic Games of the modern era involve presentations, exhibitions, competitions and other activities in six different fields of art.[1] They are inspired by the Delphic Games of ancient Greece. 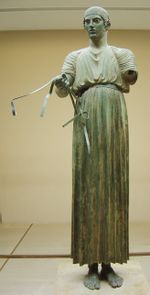 Statue of a charioteer (at 478-474 BC), Archaeological Museum Delphi, Greece

One of the four Panhellenic Games were the Pythian Games in Delphi. Held every four years, they included competitions in athletics, theatre, music, poetry, and painting to praise the god Apollo, the symbol of the Oracle.[2] In the year 394 A.D., Theodosius I, the emperor of the Byzantine Empire banned all Panhellenic Games as being pagan events.

Since 1912 till 1948, on the initiative of Pierre de Coubertin, art competitions at the Summer Olympics were held in various countries. Medals were awarded for works related solely to sport.[3]

There was also an attempt to revive Pythian Games at the archeological site of Delphi, at the initiative by the Greek poet Angelos Sikelianos [4] and his wife Eva Palmer. In 1927, the first Delphic Festival was held in Greece, but the revival was then abandoned.

Nowadays there are so-called Delphi Festivals, which are the closest to their Panhellenic counterparts. They include religious rituals and activities like poetry competition, religious offerings, sports and of course feasting.[5] 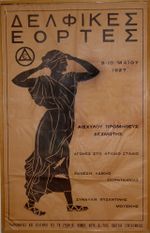 Poster of the Delphic Festival, 1927

In the second half of the 20th century, there was another attempt to restore Delphic Games. Since the 1990s, representatives from Argentina, Austria, China, Cyprus, Ecuador, France, Germany, Greece, Kazakhstan, Libya, Lithuania, Mexico, Nigeria, Philippines, Poland, Russia, Slovakia, and the United States came together and organized First International Delphic Games, which took place in 2000 in Moscow, Russia (before that the concept was tested out in Tbilisi, Georgia, where First Junior Delphic Games took place.)

Under the patronage of the International Delphic Committee (headquartered in Moscow) and UNESCO,[citation needed][20][21] the First Open Youth European Delphic Games were held in Volgograd, Russia, on May 2–7, 2014.[22]