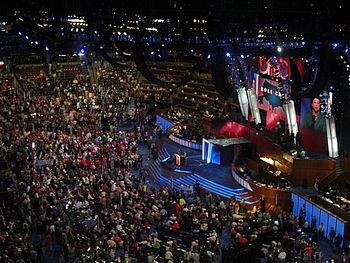 Democratic National Committee Secretary Alice Travis Germond opens the roll call of the states during the third day of the 2008 convention.

The party's presidential nominee is chosen in a series of individual state caucuses and primary elections. Superdelegates, delegates whose votes are not bound to the outcome of a state's caucus or primary, may also influence the nomination. To secure the nomination for the Democratic party in 2016, a candidate must secure 2,383 delegates. This number includes both pledged delegates and superdelegates.[2]

Prior to 1936, nomination for president was required, not merely by a majority, but by two-thirds of the total number of delegates. Unless there was a popular incumbent, something that only happened three times between the Civil War and World War II, getting that many votes on the first ballot was implausible. The choice was an often contentious debate that riled the passions of party leaders. Delegates were forced to vote for a nominee repeatedly until someone could capture a minimum number of delegates needed. In 1912, 1920 and most notoriously in 1924, the voting went on for dozens and dozens of ballots.

The rules were changed to a simple majority in 1936. Since then only one multi-ballot convention (1952's) has taken place.

Before about 1970, the party's choice of the vice-presidential nominee was usually not known until the last evening of the convention. This was because the presidential nominee had little to do with the process and in many cases was not known at the start of the convention. In 1944 and 1956, the nominee let the convention choose the running mate without a recommendation, leading to multiballot voting, and other times, successful attempts to sabotage the nominee by scattering delegate votes for someone else besides his choice, as in 1972 and 1980, led to disruptions.

In order to prevent such things from happening in the future, the presumptive nominee has, since 1984, announced his choice before the convention even opened, and (s)he has been ratified by voice vote.

By 1824, the congressional nominating caucus had fallen into disrepute and collapsed as a method of nominating presidential and vice presidential candidates. A national convention idea had been brought up but nothing occurred until the next decade. State conventions and state legislatures emerged as the nomination apparatus until they were supplanted by the national convention method of nominating candidates. President Andrew Jackson's "Kitchen Cabinet" privately carried out the plan for the first Democratic National Convention; the public call for the first national convention emanated from Jackson's supporters in New Hampshire in 1831.

The first national convention of the Democratic Party began in Baltimore on May 21, 1832. In that year the 2/3 rule was created, requiring a 2/3 vote to nominate a candidate, in order to show the party's unanimous support of Martin Van Buren for vice president. Although this rule was waived in the 1836 and 1840 conventions, in 1844 it was revived by opponents of former President Van Buren, who had the support of a majority, but not two-thirds, of the delegates, in order to prevent him from receiving the nomination. The rule then remained in place for almost the next hundred years, and often led to Democratic National Conventions which dragged on endlessly, most famously at the 1860 convention, when the convention adjourned in Charleston without making a choice and reconvening in separate groups a short time later, and the 1924 convention, when "Wets" and "Drys" deadlocked between preferred candidates Alfred E. Smith and William G. McAdoo for 103 ballots before finally agreeing on John W. Davis as a compromise candidate. At the 1912 convention, Champ Clark was the first person to receive a majority of the votes who did not go on to achieve a two-thirds vote and the nomination. The 2/3 rule was finally abolished in 1936, when the unanimity in favor of the renomination of President Franklin D. Roosevelt allowed it finally to be put to rest. In the years that followed only one convention (the 1952 Convention) actually went beyond a single ballot.

During the time the rule was in force, it virtually assured that no candidate not supported by the South could be nominated. The elimination of the two-thirds rule made it possible for liberal Northern Democrats to gain greater influence in party affairs, leading to the disenfranchisement of Southern Democrats, and defection of many of the latter to the Republican Party, especially during the Civil Rights struggles of the 1960s. Strom Thurmond was one such Democrat who joined the Republican party.[citation needed]

William Jennings Bryan delivered his "Cross of Gold" speech at the 1896 convention. The most historically notable—and tumultuous—convention of recent memory was the 1968 Democratic National Convention in Chicago, Illinois, which was fraught with highly emotional battles between conventioneers and Vietnam War protesters and an outburst by Chicago mayor Richard J. Daley. Other confrontations between various groups, such as the Yippies and members of the Students for a Democratic Society, and the Chicago police in city parks, streets and hotels marred this convention. Following the 1968 convention, in which many reformers had been disappointed in the way that Vice President Hubert Humphrey, despite not having competed in a single primary, easily won the nomination over Senators Eugene McCarthy and George McGovern (who announced after the assassination of another candidate, Senator Robert F. Kennedy), a commission headed by Senator McGovern reformed the Democratic Party's nominating process to increase the power of primaries in choosing delegates in order to increase the democracy of the process. Not entirely coincidentally, McGovern himself won the nomination in 1972. The 1972 convention was significant in that the new rules put into place as a result of the McGovern commission also opened the door for quotas mandating that certain percentages of delegates be women or members of minority groups, and subjects that were previously deemed not fit for political debate, such as abortion and lesbian and gay rights, now occupied the forefront of political discussion.

The nature of Democratic (and Republican) conventions has changed considerably since 1972. Every 4 years, the nominees are essentially selected earlier and earlier in the year, so the conventions now officially ratify the nominees instead of choose them. (Even the close race of 2008, which was not decided until early June, did not change the modern function of the convention). The 1980 convention was the last convention for the Democrats that had even a sliver of doubt[by whom?] about who the nominee would be.[citation needed] (Ted Kennedy forced a failing vote to free delegates from their commitment to vote for Jimmy Carter). The 1976 convention was the last where the vice-presidential nominee was announced during the convention, after the presidential nominee was chosen. (Carter choosing Walter Mondale.) After the "ugly" conventions of 1968 and 1972, the parties realized it was in their interests to show a unified party to the nation during the convention, and to try to eliminate any dissent. And as the conventions became less interesting, and television ratings have generally declined (as they have on average for all television shows),[3] the networks have cut back their coverage significantly, which in turn has forced the parties to manage what is televised even more closely.

The 1984 convention at the Moscone Center in San Francisco remains the last Democratic Convention to be held in a convention center complex; all others since then have been held at sports stadiums or arenas.