Patty Murray was the first female chair of the DSCC. Her tenure was a mixed bag. Her team raised more than $143 million, beating the previous record by $40 million, but Democrats lost two seats. For the first time since 1914 a president's party had taken control of the Senate in a midterm election. Most observers, though, attributed the outcome to George W. Bush's post-9/11 popularity and the death of Senator Paul Wellstone of Minnesota, who had been favored to win.[1]

Chuck Schumer chaired the DSCC for the first of two consecutive cycles. Prior to the election, the Republican Party controlled 55 of the 100 Senate seats. The Senate elections were part of the Democratic sweep of the 2006 elections, in which Democrats made numerous gains and no Congressional or gubernatorial seat held by a Democrat was won by a Republican. Six Republican incumbents were defeated by Democrats: Jim Talent (Missouri) lost to Claire McCaskill, Conrad Burns (Montana) lost to Jon Tester, Mike DeWine (Ohio) lost to Sherrod Brown, Rick Santorum (Pennsylvania) lost to Bob Casey Jr., Lincoln Chafee (Rhode Island) lost to Sheldon Whitehouse, and George Allen (Virginia) lost to Jim Webb. Incumbent Democrat Joe Lieberman (Connecticut) lost the Democratic primary, but won re-election as an independent. Democrats kept their two open seats in Minnesota and Maryland, and Republicans held onto their lone open seat in Tennessee. In Vermont, Bernie Sanders, an independent, was elected to the seat left open by independent Senator Jim Jeffords. In the 2006 election, two new female Senators (Claire McCaskill and Amy Klobuchar) were elected to seats previously held by men. This brought the total number of female senators to an all-time high of 16.

Following the elections, no party held a majority of seats for the first time since 1954. However, the party balance for the Senate stood at 51–49 in favor of the Democrats, because independents Bernie Sanders and Joe Lieberman caucused with the Democrats. The Democrats needed 51 seats to control the Senate because Vice President Dick Cheney would have broken any 50–50 tie in favor of the Republicans.

Chuck Schumer chaired the DSCC for the second of two consecutive cycles. Going into the 2008 election, the Senate consisted of 49 Democrats, 49 Republicans, and two independents (Bernie Sanders of Vermont and Joe Lieberman of Connecticut) who caucused with the Democrats, giving the Democratic caucus a 51-49 majority. Of the seats up for election in 2008, 23 were held by Republicans and 12 by Democrats. The Republicans, who openly conceded early on that they wouldn't be able to regain the majority in 2008, lost eight seats. This election was the second cycle in a row in which no seats switched from Democratic to Republican. In addition, this was the largest Democratic Senate gain since 1986, when they also won eight seats.

Democrats defeated five Republican incumbents: Ted Stevens of Alaska lost to Mark Begich, Norm Coleman of Minnesota lost to Al Franken, John Sununu of New Hampshire lost to Jeanne Shaheen, Elizabeth Dole of North Carolina lost to Kay Hagan and Gordon Smith of Oregon lost to Jeff Merkley. Democrats also picked up open seats in Colorado, New Mexico, and Virginia. When the new Senate was first sworn in, the balance was 58–41 in favor of the Democrats, because of the unresolved Senate election in Minnesota. The defection of Republican Arlen Specter of Pennsylvania in April 2009 and the swearing-in of Al Franken of Minnesota in July 2009 brought the balance to 60–40.

In 2012, 23 Democratic Senate seats were available, as opposed to 10 Republican seats. An increase of four seats would have given the GOP a Senate majority. In the election, three GOP seats and one Democratic seat was lost, increasing the Democratic majority by two.[2]

DSCC executive director said their strategy was to "localize" elections – make them "a choice between the two people on the ballot...and not simply allow it to be a nationalized election".[3] Because this is not easy to do in a presidential election year, the DSCC had gone very much on the offensive, depicting Republican candidates and donors, and especially the Tea Party, as extreme. During the Florida and Indiana primaries, they pushed that the Tea Party was working to move the GOP "so far to the right that candidates will say anything to get their party's nomination". The GOP targeted four red states to pick up the seats they need for a Senate majority. They were looking at states that didn't swing for President Obama in 2008: Missouri, Montana, Nebraska and North Dakota. They lost three of those four seats.[3][4]

In 2013, 21 Democrats were up for either re-election or election to complete the six-year term. In order to have a majority, the Republicans were required to attain at least 51 seats in the Senate. The Democrats would have been able to retain a majority with 48 seats (assuming the two Independents continued to caucus with them) because, in event of a tie vote, Vice President Joe Biden becomes the tie-breaker. Many of the incumbents were elected in the Democratic wave year of 2008 along with President Obama's first election.

Although Democrats saw some opportunities for pickups, the combination of Democratic retirements and numerous Democratic seats up for election in swing states and red states gave Republicans hopes of taking control of the Senate. 7 of the 21 states with Democratic seats up for election in 2014 had voted for Republican Mitt Romney in the 2012 presidential election. Democrats also faced the lower voter turnout that accompanies mid-term elections.

By midnight ET, most major networks projected that the Republicans would take control of the Senate. The party held all three competitive Republican-held seats (Kentucky, Kansas, and Georgia), and defeated incumbent Democrats in North Carolina, Colorado, and Arkansas. Combined with the pick-ups of open seats in Iowa, Montana, South Dakota, and West Virginia, the Republicans made a net gain of 7 seats before the end of the night. In the process of taking control of the Senate, Republicans defeated three incumbent Democrats, a task the party had not accomplished since the 1980 election. Five of the seven confirmed pickups were in states that voted for Mitt Romney in 2012, but two of the seats that Republicans won represent states that voted for Barack Obama in 2012 (Colorado and Iowa). Of the three races that were not called by the end of election night, Alaska and Virginia were still too close to call, while Louisiana held a December 6 run-off election. Virginia declared Democrat Mark Warner the winner of his race by a narrow margin over Republican Ed Gillespie on November 7, and Alaska declared Dan Sullivan the winner against Democratic incumbent Mark Begich a week later, on November 12. Republican Bill Cassidy defeated Democratic incumbent Mary Landrieu in the Louisiana runoff on December 6.

Days after the election, the United States Election Project estimated that 36.6% of eligible voters voted, 4% lower than the 2010 elections, and possibly the lowest turnout rate since the 1942 election.

In 2015 10 Democrats and 23 Republicans are up for either re-election or election to complete the six-year term. In order to have a majority, the Democrats are required to attain at least 51 seats or 50 seats (and hold the Presidency) in the Senate. The Democrats would be able to gain a majority with 48 seats (assuming the two Independents continued to caucus with them) because, in event of a tie vote, the Vice President becomes the tie-breaker. Many of the incumbents were elected in the Republican wave year of 2010 midterm. The Democrats need to gain 4 seats as the Republicans currently hold the majority 54-46, with both independent candidates caucusing with the Democrats. Two-term Senator Jon Tester of Montana will chair the DSCC for this cycle.

There are only two seats that the Democrats must defend this cycle: Michael Bennet of Colorado and the seat of Retiring Sen. Harry Reid. Seven of the Republican seats that are up for reelection are in states that Obama won twice, Sen. Mark Kirk of Illinois, Sen. Pat Toomey of Pennsylvania, Sen. Ron Johnson of Wisconsin, Sen. Kelly Ayotte of New Hampshire, Sen. Chuck Grassley of Iowa, Sen. Rob Portman of Ohio and the seat vacated by Sen. Marco Rubio of Florida who is retiring from the Senate and running for president instead of reelection. In all but one of those seat, Iowa, the Republican incumbents are fighting to be reelected for the first time. Democrats are also targeting the open seat in Indiana which will be vacated by the retiring Sen. Dan Coats. There are several other states the Democrats are focused on where the Republican incumbents may be vulnerable: Sen. John McCain of Arizona, Sen. Lisa Murkowski of Alaska, Sen. John Boozman of Arkansas, Sen. Richard Burr of North Carolina, Sen. Johnny Isakson of Georgia, Sen. Roy Blunt of Missouri, Sen. Rand Paul of Kentucky who is simultaneously running for President and Sen. David Vitter of Louisiana who may vacate his seat if he wins the Governorship of Louisiana in 2015.[5] 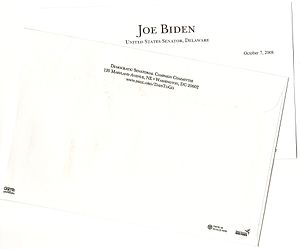 DSCC has long focused on direct mail fundraising. Here, excerpts from a 2008 example with a plea from Senator and Vice-Presidential candidate Joe Biden.