From Infogalactic: the planetary knowledge core
Jump to: navigation, search
This article is about the political party in Northern Ireland. For other uses, see Democratic Unionist Party (disambiguation).

The DUP has historically strong links to Protestant churches, particularly the Free Presbyterian Church of Ulster (the church Paisley founded) and has traditionally been regarded as the more Ulster loyalist of the two large unionist parties. However, this influence has reduced somewhat under the Robinson leadership in an attempt to reach out to non-Protestants, particularly socially conservative Catholics.[7][8]

Following on from the St Andrews Agreement in October 2006, the DUP agreed with the Irish republican party Sinn Féin to enter into power-sharing devolved government in Northern Ireland. In the aftermath of the agreement there were reports of divisions within the DUP. Many of its leading members, including Members of Parliament (MPs) Nigel Dodds, David Simpson and Gregory Campbell, were claimed to be in opposition to Paisley. All the party's MPs fully signed up to the manifesto for the 2007 Assembly elections, supporting power-sharing in principle. An overwhelming majority of the party executive voted in favour of restoring devolution in a meeting in March 2007;[9] however, the DUP's sole Member of the European Parliament (MEP), Jim Allister,[10] and seven DUP councillors[11] later resigned from the party in opposition to its plans to share power with Sinn Féin. They founded the Traditional Unionist Voice in December 2007.[12]

The DUP is the largest party in Northern Ireland, holding eight seats at Westminster and 38 seats in the Northern Ireland Assembly. It has one seat in the European Parliament, where its MEP, Diane Dodds, sits as a Non-Inscrit.

The party was established in 1971 by Ian Paisley and Desmond Boal and other members of the Protestant Unionist Party. Since its foundation it has won seats at local council, Northern Ireland, UK and European level. It won eight seats in the Northern Ireland Assembly of 1973-1974, where it opposed the formation of a power-sharing executive made up of unionists and Irish nationalists following the Sunningdale Agreement. The DUP were more Ulster loyalist than the Ulster Unionist Party (UUP). and its establishment arguably stemmed from insecurities of the Ulster Protestant working class.[13] Paisley was elected one of Northern Ireland's three European Parliament members at the first elections in 1979 and retained that seat in every European election until 2004. In 2004 Paisley was replaced as the DUP MEP by Jim Allister, who resigned from the party in 2007 while retaining his seat.[10]

The DUP also holds seats in the House of Commons of the United Kingdom, and has been elected to each of the Northern Ireland conventions and assemblies set up since the party's creation. It has long been the principal rival to the other major unionist party, the UUP (known for a time in the 1970s and 1980s as the Official Unionist Party (OUP) to distinguish it from the then multitude of other unionist parties, some set up by deposed former leaders). The DUP's main opponent is Sinn Féin and its main rival for votes is Traditional Unionist Voice.

The DUP was originally involved in the negotiations under former United States Senator George J. Mitchell that led to the Good Friday Agreement, but withdrew in protest when Sinn Féin, an Irish republican party with links to the Provisional Irish Republican Army (IRA), was allowed to participate while the IRA retained its weapons. The DUP opposed the Agreement in the Northern Ireland Good Friday Agreement referendum, in which the Agreement was approved with 71.1% of the electorate in favour.

The opposition was based on a number of reasons, including:

The Good Friday Agreement relied on the support of a majority of unionists and a majority of nationalists in order for it to operate.[citation needed] During the 2003 Assembly Election, the DUP argued for a "fair deal" that could command the support of both unionists and nationalists. After the results of this election the DUP argued that support was no longer present within unionism for the Good Friday Agreement. They then went on to publish their proposals for devolution in Ireland entitled Devolution Now.[14]

These proposals have been refined and re-stated in further policy documents including Moving on[15] and Facing Reality.[16] The DUP holds the view that any party which is linked to a terrorist organisation should not be eligible to hold Government office.[citation needed]

The DUP fought the resulting election to the Northern Ireland Legislative Assembly and took two seats in the multi-party power-sharing executive. While serving as ministers, they refused to sit in at meetings of the Executive Committee in protest at Sinn Féin's participation.[citation needed] The Executive ultimately collapsed over an alleged IRA espionage ring at Stormont (see Stormontgate).

In the delayed Northern Ireland Assembly election of 2003, the DUP became the largest political party in the region, with 30 seats. In 2004, it became the largest Northern Ireland party at Westminster, with the defection of former UUP MP Jeffrey Donaldson. On 12 December 2004, English MP Andrew Hunter took the DUP whip, giving the party seven seats, in comparison to the UUP's five, Sinn Féin's four, and the SDLP's three.

On 11 April 2006, it was announced that three DUP members were to be elevated to the House of Lords: Maurice Morrow, Wallace Browne, the former Lord Mayor of Belfast, and Eileen Paisley, a vice-president of the DUP and wife of DUP Leader Ian Paisley. None, however, sit as DUP peers.

On 27 October 2006, the DUP issued a four-page letter in the Belfast Telegraph newspaper asking "Are the terms of Saint Andrew's a basis of moving forward to devolution?", with responses to be received to its party headquarters by 8 November. It was part of the party's policy of consultation with its electorate before entering a power-sharing government.[citation needed]

In February 2007, the DUP suggested that it would begin to impose fines up to £20,000 on members disobeying the party whip on crucial votes.[19]

On 24 March 2007 the DUP party executive overwhelmingly endorsed a resolution put to them by the party officers which did not agree to an establishment of devolution and an executive in Northern Ireland by the Government's deadline of 26 March, but did agree to setting up an executive on 8 May 2007.[9]

On 27 March 2007, the party's sole Member of the European Parliament (MEP), Jim Allister, resigned from the party, in opposition to the decision to enter a power-sharing government with Sinn Féin. He retained his seat as an independent MEP as leader of his new hard-line anti-St Andrews Agreement splinter group that he formed with other disaffected members who had left the DUP over the issue, Traditional Unionist Voice, a seat which he retained until Diane Dodds won the seat back for the DUP in 2009. MP Gregory Campbell warned on 6 April 2007 that his party would be watching to see if benefits flow from its agreement to share power with Sinn Féin.[20]

On 31 May 2008, the party's central Executive Committee met at the offices of Castlereagh Borough Council where Ian Paisley formally stepped down as party leader and Peter Robinson was ratified as the new leader, with Nigel Dodds as his deputy.

On 11 June 2008 the party supported the government's proposal to detain "terror suspects" for up to 42 days, leading to The Independent dubbing all of the party's nine MPs as part of "Brown's dirty dozen".[21] The Times reported that the party had been given "sweeteners for Northern Ireland" and "a peerage for the Rev Ian Paisley", amongst other offers, to secure Gordon Brown's bill.[22]

Members of the DUP were lambasted by the press and voters, after MPs' expenses reports were leaked to the media. Several newspapers referred to the "Swish Family Robinson" after Peter Robinson, and his wife Iris, claimed £571,939.41 in expenses with a further £150,000 being paid to family members.[23] Further embarrassment was caused to the party when its deputy leader, Nigel Dodds, had the highest expenses claims of any Northern Ireland MP, ranking 13th highest out of all UK MPs.[24] Details of all MPs' expenses claims since 2004 were published in July 2009 under the Freedom of Information Act 2000.

In January 2010, Peter Robinson was at the centre of a high-profile scandal relating to his 60-year-old MP/MLA wife Iris Robinson's infidelity with a 19-year-old man, and alleged serious financial irregularities associated with the scandal.[25][26] 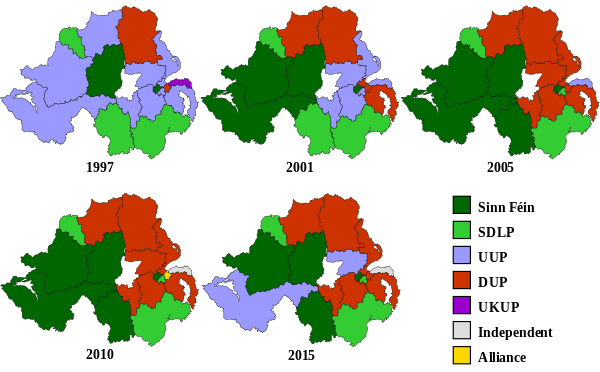 In the 2010 General Election, the party suffered a major upset when its leader, Peter Robinson, lost his Belfast East seat to Naomi Long of the APNI on a swing of 22.9%. However, the party maintained its position elsewhere, fighting off a challenge from the Ulster Conservatives and Unionists – New Force in Antrim South and Strangford and from Jim Allister's Traditional Unionist Voice in Antrim North.

On 10 September 2015, Peter Robinson stepped aside as First Minister and other DUP ministers, with the exception of Arlene Foster, resigned their portfolios.[27]

Parliament of the United Kingdom

Members of the House of Commons as of May 2015:

Members of the House of Lords:

Members of the 2011 Northern Ireland Assembly: 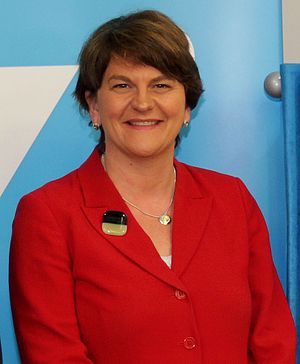 Founder Ian Paisley led the party from its foundation in 1971 onwards, and retired as leader of the party in spring 2008.

The following are the terms of office as party leader and as First Minister of Northern Ireland: