Main article: List of Canadian provinces and territories by population

Main article: List of the 100 largest population centres in Canada

Main articles: List of largest Canadian cities by census and List of the 100 largest municipalities in Canada by population 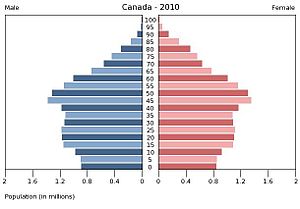 Median age by province and territory, 2011

In the 2006 census, Canadians could identify as being of one or more ethnicities. Percentages therefore add up to more than 100%. The most common response was "Canadian". As data is completely self-reported, and reporting individuals may have varying definitions of "Ethnic origin" (or may not know their ethnic origin), these figures should not be considered an exact record of the relative prevalence of different ethno-cultural ancestries but rather how Canadians self-identify.

Statistics Canada projects that, by 2031, about 28% of the population will be foreign-born. The number of people belonging to visible minority groups will double,[17] and make up the majority of the population in Toronto and Vancouver.

Counting both single and multiple responses, the most commonly identified ethnic origins were (2011):

Data from the same subject matter, though from 2001, is also grouped more geographically by Statistics Canada as follows:[18]

The most common ethnic origins per province are as follows[21] (total responses; only percentages 10% or higher shown; ordered by percentage of "Canadian"):

By province and territory

All statistics are from the Canada 2011 Census.

Note: Inuit, other Aboriginal and mixed Aboriginal groups are not listed as their own, but they are all accounted for in total Aboriginal

By province and territory

All statistics are from the Canada 2011 Census.

Language used most often at work:[42]

Languages by language used most often at home:[43] 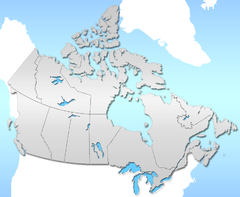 Demographics of Canada's provinces and territories